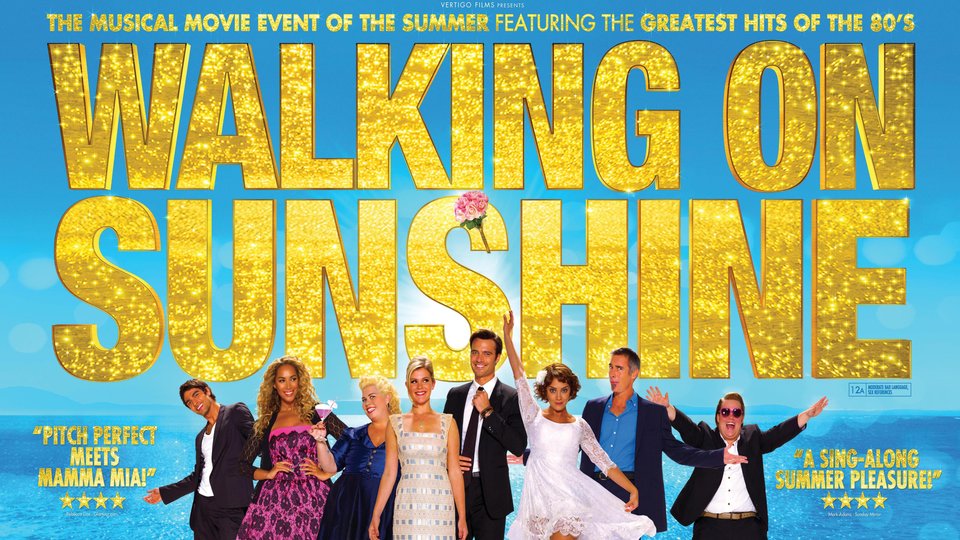 After a whirlwind holiday romance 3 years earlier, Taylor (Hannah Arterton) returns to Puglia, Italy after finishing Uni to reconnect with her sister Maddie (Annabel Scholey). She’s shocked when Maddie announces her plans to get married to her dashing new boyfriend of 5 weeks. But even more shocking than that, when she meets him for the first time it turns out to be Raf (Giulio Berruti), the same guy Taylor fell in love with all those summers ago.

Walking on Sunshine pitches itself as the new Mamma Mia and it’s easy to see the similarities. This is actually a better film though, with an 80’s soundtrack that will happily get your feet tapping and your inner diva singing. It was the perfect world cup alternative given its harmonious marriage of song, dance, romance and comedy and struck a real chord with audiences this summer.

First off (and this is important) – cynics need not apply. I say this because Walking on Sunshine approaches its remit with a delightful lack of pretence and seriousness. This is a film that plays squarely to its strengths and revels in its own fun. It’s very easy to pick holes in this, but it’s a very tough task making an enjoyable romantic-comedy (and musical). Walking on Sunshine succeeds on both counts.

The cast are all brilliant and make Walking on Sunshine a fun watch. The film knows exactly who their target audience are too, and at times it feels like you are watching a 97min Diet Coke break. There are a staggering amount of topless men on show, all dutifully obliging the ladies. Giulio Berruti, who hands in a great performance as the dashing object of the girls affections, is responsible for audible sighs from the audience when he emerges from the sea. It happens during one of the films best musical numbers, Whitney Houston’s How Will I Know?. It’s shameless and hilarious in equal measure, but you can’t knock the film for playing to its strengths.

The gorgeous girls are very good too with Hannah Arterton (Gemma’s sister) doing well in her first lead role. She shares a good chemistry with Berruti and really comes into her own towards the end of the film with her big musical number. Annabel Scholey is well versed in stage acting and you can tell – she steals all of her scenes as Maddie and brings with her a vibrancy and energy that makes the film tick along nicely. Add in great levels of sultriness and you have an easy win – seeing her in that white dress when she meets her old flame for dinner is worth the admission price alone.

The supporting cast seem to be having lots of fun too. Giulio Corso, Danny Kirrane and Katy Brand all do well with Greg Wise brilliantly playing up to his role as the loveable lothario Doug. Leona Lewis is good in a small but pivotal role but it seems like a missed opportunity to not have her sing more in the film.

All of the cast know how to handle the musical numbers, with some tracks featuring great dance sequences and choreography. The film boasts wonderful 80’s hits too including the classic Back to the Future theme from Huey Lewis & The News – The Power of Love. Madonna – Holiday, George Michael – Faith, Cher – Turn Back Time, Bananarama – Venus and The Human League – Don’t You Want Me are just some of the gems on show. Roxette – It Must Have Been Love was surely the 90’s though!

As good as the cast are, the real star of the film is Puglia, Italy. Made with co-operation from the tourist board of Puglia, Walking on Sunshine is an ode to the perfect summer vacation. The location-shoots are brilliant with sun, sea and sand in abundance. But outside of these stalwarts of romantic-comedy, Puglia offers some beautiful, historic locations that really bring out its beauty. It makes you want to hop on a plane immediately.

Full of boundless energy and great music, Walking on Sunshine is a great summer feel-good movie. It certainly won’t be to everyone’s taste but if you want great escapist fun, it’s hard to look past this. With a great cast, sound direction and beautiful locations, it’s what summer is all about. There’s plenty to enjoy here if you approach the film in the right way, so just have fun with it and you’ll enjoy the ride a lot more.