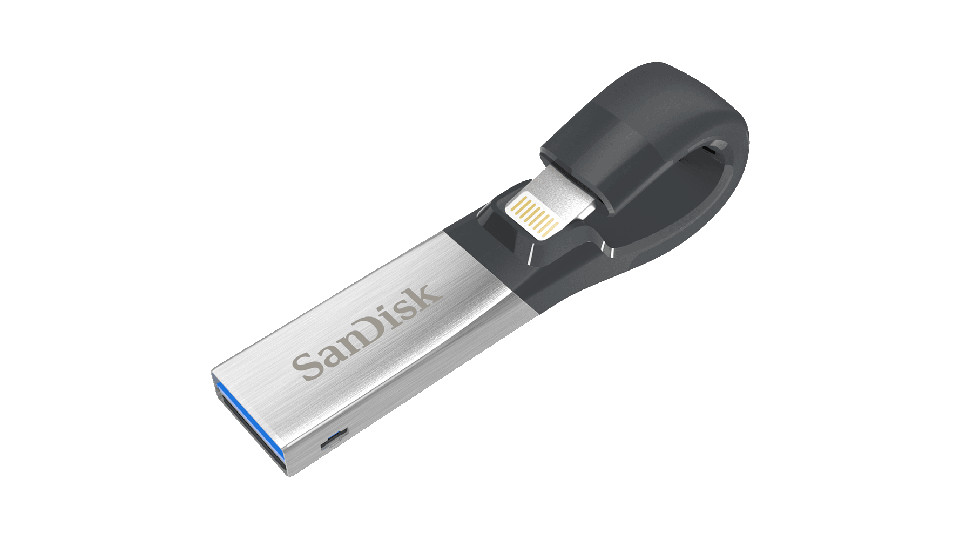 Storage space is a bit less of an issue these days for iOS mobile device users, with iPhone devices available with up to 256GB and iPad Pro up to 512GB. However, if you aren’t lucky enough to own the bigger devices or you capture a lot of photos and video, you’ll likely have experienced the inconvenience of running out of space. When you do run out of space it’s always at the worst possible time and the iOS mobile devices don’t have built in memory card slots.

When you absolutely need to free up space you’re often stuck with the dilemma of what photos and video to destroy. This can be very time consuming and can even result in binning files that you didn’t really want to get rid of. The iXpand Flash Drive from SanDisk is designed for the iPhone and iPad and aims to eliminate your storage space woes.

With dimensions of roughly 6x1x1.5cm, the iXpand Flash Drive is similar in size to most USB thumb drives. One end features a USB 3.0 connector while the other end is a Lightning connector. The Lightning connector kind of folds back on itself forming a small loop which allows you to hang the drive from a keyring or bag.

The iXpand Flash Drive is currently available in five different sizes – 16GB, 32GB, 64GB, 128GB and 256GB. I reviewed the 32GB model but the only difference between the models is the storage size. It’s sensible to pick at least the same size as your iOS mobile device and bigger if you can afford to.

Once the app is installed you have several options. You can manually copy images, video, music and files to the iXpand drive and vice versa. As well as taking a copy it’s also possible to have the app delete the original copy from your iOS device to free up space. I did initially have issues copying files, the app would say there were transferred but they weren’t appearing on the iXpand Drive. I found a workaround that if I told it to copy and delete a file from my iPhone 8 Plus that all subsequent transfers worked. If this is a software bug I’d expect it to be easily fixed with a patch from SanDisk.

In addition to manually copying or moving files, there is also an auto-backup ability. Once configured, each time you attach the iXpand Drive it will automatically backup all your photos from your Camera Roll. This is a great time saver and gives additional peace of mind that your precious memories are backed up. An additional option lets you store video and music on the drive and play them directly on your phone.

Once your data is safely transferred to the iXpand via the Lightning connector you can then remove it from your device. The USB 3.0 end of the iXpand can then be used to transfer data to your PC or laptop. You can also move data from your computer back to the iXpand to then put on your iOS mobile device.

The SanDisk iXpand Flash Drive is an impressive bit of kit that makes it easy to free up space or add additional storage to your iOS devices. If you have an iPhone or iPad with limited capacity then purchasing one of these drives will help the frustration of running out of space.

The SanDisk iXpand Flash Drive for iPhone and iPad was reviewed using a review unit supplied by SanDisk.