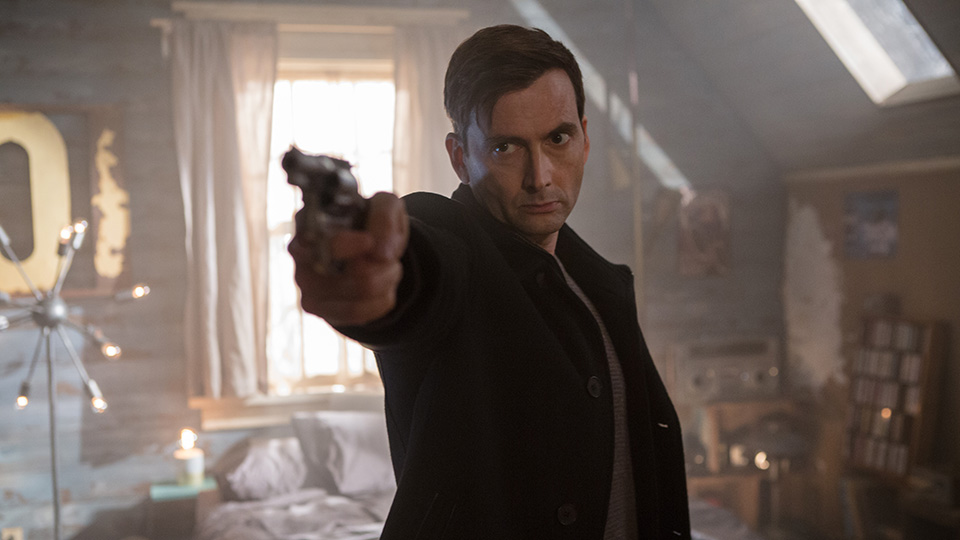 Petty thief Sean Falco (Robert Sheehan) works as a restaurant valet with his friend Derek (Carlito Olivero) so they can rob the houses of the people who dine there. When arrogant customer Cale Erendreich (David Tennant) pulls up in his Maserati, Sean happily takes the keys under the guise that he’s going to park it. Instead he finds out where Cale lives and drives to his house to rob him. Once there he finds a locked room and is encouraged by Derek to break in. When he does, he’s shocked to discover a young woman (Kerry Condon) gagged and tied to a chair. Unable to set her free, Sean is forced to flee but his actions force him to right his wrong and save her.

Bad Samaritan is a tense, edge-of-the-seat thriller from director Dean Devlin (Geostorm). The film wastes no time getting to the meat of the story and it packs in a fair few proper jump scares. I’m don’t normally react during these kinds of films but even I was jumping out of my seat on a few occasions. The premise is intriguing and Sean’s discovery of the woman in Cale’s house sets off a cat-and-mouse game where the stakes quickly rise. Sean feels guilt for leaving the woman in Cale’s house, in order to make a clean getaway and save his own skin.

Believing he will be able to help her by simply calling the police Sean underestimates Cale, who is quick to move the woman and clean out all evidence of her from his house. This is when the film really kicks things up a gear and Sean finds himself in a race against time to find the woman he deserted. As Sean gets closer to Cale, Cale starts targeting those around him in a bit to keep his dark secret hidden.

I have to admit that I wasn’t expecting all that much from Bad Samaritan. I was hoping it would be watchable at least but it was actually very, very entertaining. David Tennant makes a very good villain, disguising his usually soft Scottish accent with a harsher American one. He proved in Marvel’s Jessica Jones that he can do menacing but he ramps it up as the completely unhinged, but scarily in control, Cale. Robert Sheehan, best-known for British series Misfits, also gives a very strong performance as Sean. He carries much of the weight of the film and he’s utterly convincing throughout. Sheehan comes into his own when he has the more emotional moments to deal with and he delivers them flawlessly.

My only real complaint about Bad Samaritan is that there’s some clumsy exposition in a bid to explain to the audience why Cale is the way he is. It’s not really needed and I feel the film would have been just as, it not more, effective had the makers not gone to such lengths to explain his behaviour. It was a little more than was needed and I didn’t feel the backstory added much to the overall film.

Bad Samaritan is a solid thriller with compelling performances and enough twists and turns to keep you hooked. I was on the edge of my seat for the majority of the film and I felt it brought everything to a satisfying conclusion. I really liked the premise as it put a refreshing twist on the home invasion style story. You may not need to fully engage your brain to enjoy this but it’s the definition of a popcorn flick and I absolutely loved it.