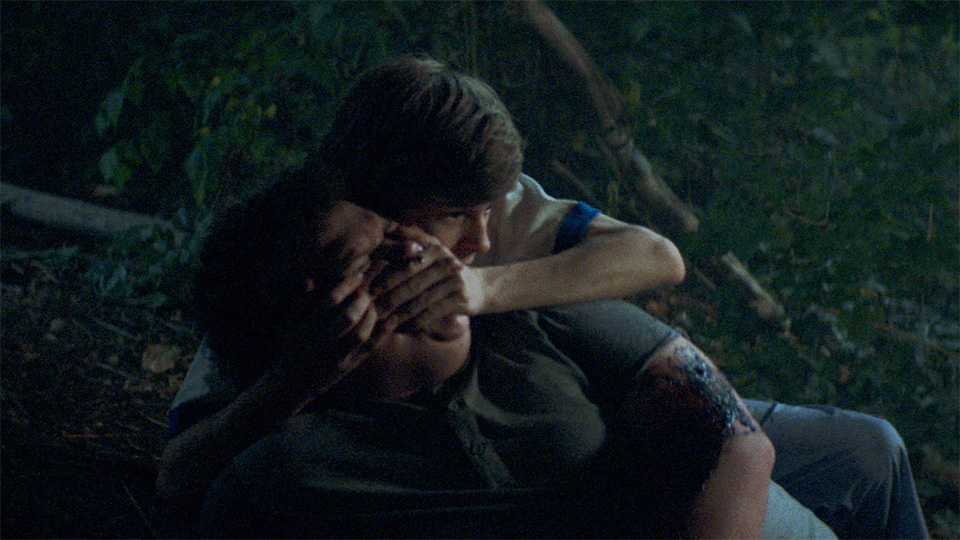 News of kids disappearing hits the small town of Cape May scaring parents but exciting the children, who are happy that something is finally happening in their home town. Davey (Graham Verchere) convinces his friends Tommy (Judah Lewis), Woody (Caleb Emery) and Curtis (Cory Gruter-Andrew) that their friendly neighbourhood policeman Wayne Mackey (Rich Sommer) could be the man responsible. He enlists their help to keep an eye on Mackey to prove that he is the kidnapper but is there any truth behind Davey’s suspicions?

Summer of ’84 arrives at a time when Stephen King’s IT and Netflix’s hit series Stranger Things are making audiences yearn for stories involving kids. Cynically you could say that Summer of ’84 is cashing in on that current trend and for the first 20 minutes of the film you’d be forgiven for thinking that. Directors François Simard, Anouk Whissell and Yoann-Karl Whissell tick every box – 80s setting, atmospheric 80s music, kids getting up to mischief behind their parents’ back – but it soon becomes clear that Summer of ’84 isn’t just any old film. It’s actually a bloody great one that’s full of suspense and goes places you just don’t expect it to go.

The entire film hinges on whether you believe Davey or not. On the one hand it seems too obvious that Mackey could really be a killer but on the other hand Davey tells us at the very start that every serial killer is someone’s neighbour. What ensues is a very tense, hugely engaging and incredibly absorbing film that explores the bond between four kids with nothing but time on their hands over the summer. Davey is the leader, Woody is dealing with his reliant mother, Tommy uses bravado to mask his family problems and Curtis is the brains who should know better.

I found myself going back and forth throughout the film. One minute I was absolutely certain I knew the answer, then doubt crept in and I was back to being unsure. The story is so tight that there’s plenty of potential red herrings as well as glaringly obvious clues. By the time the final act arrives, I was pretty exhausted from guessing and my nerves were pretty much in shreds.

The four central kids are excellent. Each plays their role so well with Judah Lewis standing out as the foul-mouthed sex-obsessed Tommy. He’s frequently hilarious and he performs with such confidence, you forget that what you’re watching is an actor rather a real character. The other boys are equally good and Verchere gives a performance way beyond his young years. There’s also a nice turn for Riverdale’s Tiera Skovbye as friendly neighbour Nikki, who is the object of all the boys’ affections. She gets to have more fun than she does in Riverdale and there’s an emotional sub-plot played out with her character.

Rich Sommer plays against type making us completely forget his long-running role in Mad Men. He has a tough job as he has to play both innocent and guilty so the audience has no idea if he’s the killer or not. He plays the role superbly managing to both amiable in a guy-next-door kind of way and menacing so that you’d be scared to answer your front door if he turned up.

Summer of ’84 is destined to sit next to the films I mention earlier along with other classics such as The Goonies and Stand By Me. The script is super sharp, the direction incredibly precise and effective, and the performances rather remarkable. If it’s blood and gore you’re after then Summer of ’84 isn’t for you but if it’s a thriller that pays plenty of nods to Hitchcock, while continually catching you off-guard that you want, then I can’t recommend this film highly enough.