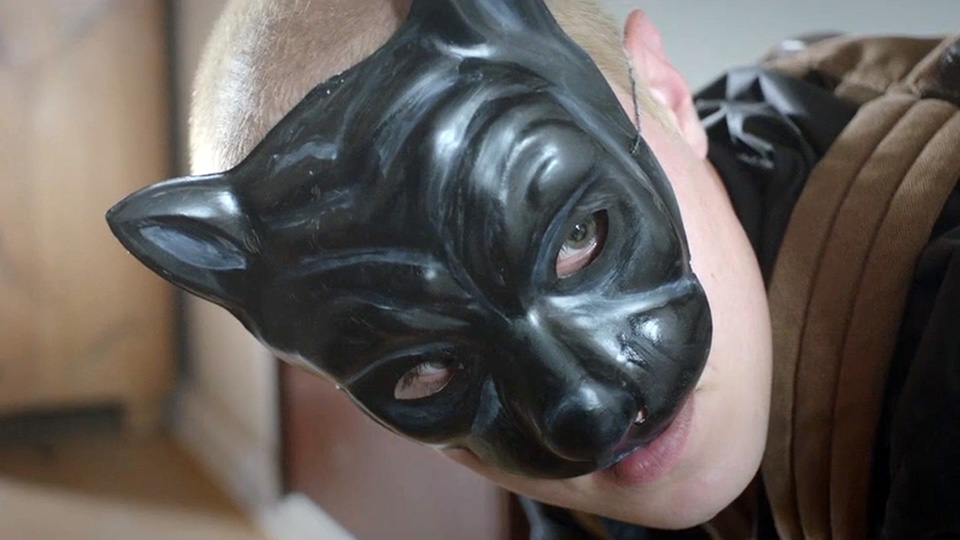 Tom (Alexander Tsypilev) is a lonely and troubled young man who spends his days robbing people’s houses with his friend Rachid (Patrick G. Boll) and his nights wearing a mask so he can enjoy anonymous hook-ups with men he meets on apps. When Tom and Rachid break into the house of Lars (Julien Lickert), a handsome young college professor, Tom becomes obsessed and starts to stalk the object of his affections.

The Year I Lost My Mind is the latest film from writer/director Tor Iben and it’s a taut thriller with a seriously sexy edge. The lead character Tom is an oddball who struggles to be honest with his own family and lives most of his life, literally, behind a mask. The first glimpse into his bedroom shows his wall adorned with a variety of masks and throughout the film Tom wears them while out and about. After first setting his eyes on Lars, Tom begins to frequently break into his house both while he’s at work and when he’s home sleeping. It’s very creepy and unsettling, but Iben makes it strangely erotic too.

A storyline that runs parallel to Tom’s stalking of Lars, is the recurring appearance of a biker whose face is obscured by his helmet. Tom begins seeing him all over town and desperately tries to find out who the man is. This is the lesser interesting of the two storylines but it helps to increase the tension and suspense that’s the backbone of the film.

Alexander Tsypilev plays creepy very well and he’s unnerving when he’s on-screen. He really lets himself go as Tom, especially in the moments he’s in Lars’ apartment alone and getting sexual gratification from the thrill of it. At times during the film he wears a cat mask and his bodily movement mirrors that of the feline he’s pretending to be. Julien Lickert on the other-hand gives a more reserved performance, smouldering as the camera lingers on his handsome face and impressive physique. He serves up some serious guy candy and it’s not hard to see why Tom is immediately attracted to him.

For the most part The Year I Lost My Mind is an enjoyable thriller dripping with sex and lust. It may lose its way a little towards the end but I still enjoyed it nonetheless. Iben has created an exploration of obsession that feels different to other films of this nature that I’ve seen and he gets strong performances out of his two leads. If you like your films unnerving but sexy, then The Year I Lost My Mind should satisfy you.