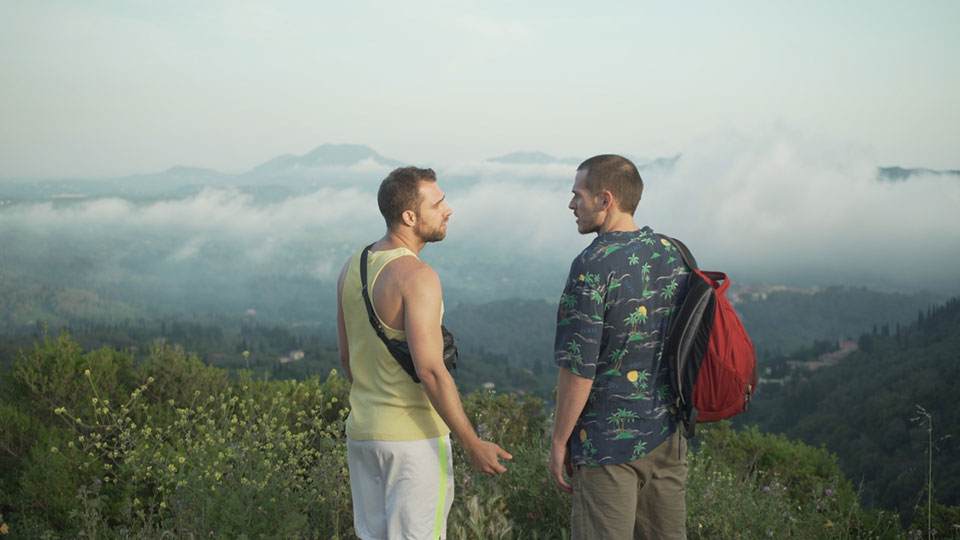 Best friends Philipp (Sascha Weingarten) and Enis (Julie Lickert) spend their days working out at the gym together. Philipp lusts after Enis, sending him shirtless selfies after his workouts but Enis acts disinterested occupying himself with his girlfriend Kristina (Kristina Kostiv) and his university work. Philipp wins a trip for two to Greece and convinces Enis to accompany him and once there they get lost on an island where they encounter the mysterious Hercules (Henry Morales). After spending a night in a cave together, the two friends find their relationship is changed and they aren’t sure if things can go back to the way they were before… or if they want them to.

Orpheus’ Song is the latest film from writer/director Tor Iben, who impressed with The Year I Lost My Mind. For this project he’s recruited Julien Lickert once again alongside relative newcomer Sascha Weingarten. From the opening few minutes of the film, it feels as if Orpheus’ Song is going to follow a well-trodden gay cinema path by having a gay man fall in love with a seemingly straight man. That is very much how the movie starts but it’s certainly not where the story ends up by the time the credits roll.

There’s a clear chemistry between Philipp and Enis but only Philipp is willing to acknowledge it. He sees the opportunity to get Enis alone in another country as a way of perhaps changing their relationship while Enis believes he’s just accompanying his friend on a holiday. When the pair meet Hercules, while wandering together mostly shirtless with plenty of homoerotic undertones, they settle in a cave where they indulge in alcohol and food. That has a strange effect on them and they wake up the next morning in their underwear and drawn to each other like never before.

It’s fair to say that Orpheus’ Song is compelling but that is mostly to the sexual and homoeroticism that underpins the whole film. The story could have done with being fleshed out a little more and in Lickert and Weingarten, Iben has two good actors. They create a believable chemistry and you root for them to reach the inevitable climax, but for a film that’s only 72 minutes in length, it doesn’t half meander along for the first 45 minutes. The stakes are fairly low and there aren’t enough twists and turns along the way.

Orpheus’ Song is an enjoyable film but it could have been so much more. The final scenes stretch beyond believability and they betray, in some ways, both characters. Having said that, the film is visually impressive both from the guy candy on offer and the direction from Iben. I’d say come for the titillation but don’t expect too much for the grey matter and you’ll probably enjoy Orpheus’ Song.