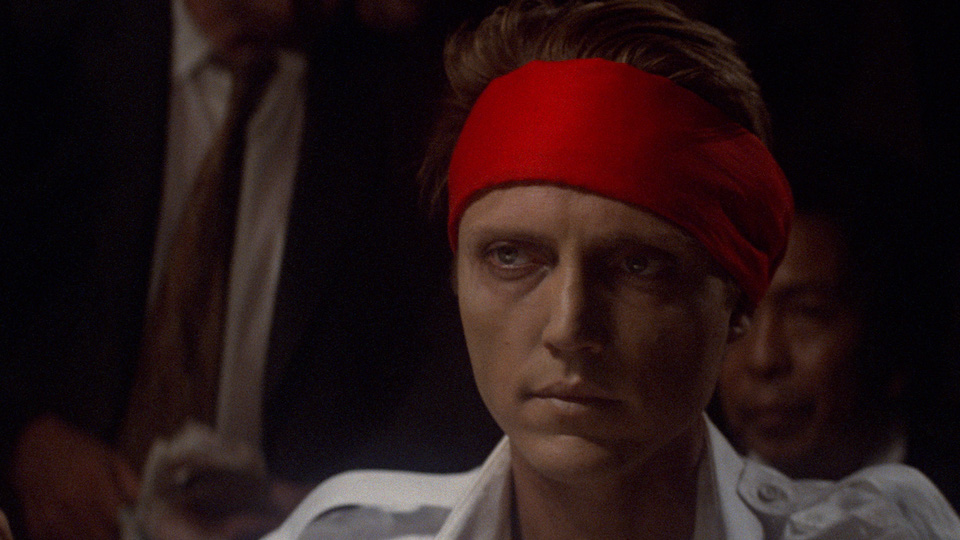 What is there left to say about The Deer Hunter? Michael Cimino’s Oscar-winning epic film is arguably one of cinema’s great masterpieces, and without a doubt the most striking vision of the irreparable damage and lasting scars the Vietnam War left on America.

Set in a working class steel town in Pennsylvania, the film tells the story of three young foundry workers, Michael (Robert De Niro), Steven (John Savage) and Nick (Christopher Walken) who have been enlisted to fight in Vietnam. The astonishing first act – which lasts for more than an hour – explores their lives in the last few days before they depart.

Then in one of the most unsettling and jarring transitions in the history of modern film, Cimino thrusts us into the horror of Vietman. No basic training sequence. No helicopters flying over the jungle. No 60s rock music on the soundtrack. Just straight into the heart of darkness. When Michael, Steven, and Nick are captured, they are forced to play Russian Roulette for the amusement and sport of their captors.

It’s one of the most harrowing sequences in any war film, and the physical and mental scars left by this ordeal, haunt them for the rest of their lives. Unlike Coppola’s vision of the corruption of the soul, or Oliver Stone’s portrayal of innocence lost, Cimino’s poetic and profound epic explores the dehumanising aspect of war. We see this at a personal level, through the experiences of Michael, Steven, and Nick, and the things they have to do in order to survive, but also at a broader political level. Vietnam was a draft war, where working class boys and men were sent off on a so-called adventure. The ones who made it home, spiritually wounded and physically crippled, returned to a country that didn’t want to know them. What could be more dehumanising than that?

There are certainly a number of things that can be said against The Deer Hunter from a factual standpoint. There’s no evidence that Russian Roulette was ever used by the North Vietnamese soldiers, and the three main characters are obviously far too old to have been drafted. The first criticism probably had more impact when the film came out, and Vietnam was still an incredibly raw and open wound for the American public to deal with. The passing of time has, I suspect, allowed it to be seen more as a symbol for how the soldiers were physically and mentally broken by the war.

The criticisms of The Deer Hunter are completely justified, but it doesn’t prevent the film from being a cinematic landmark. And to celebrate it’s iconic status, 40 years on from it’s original release, it has been given a brand new 4K restoration by Studiocanal. Following a brief theatrical run earlier in the year, it is now heading to blu-ray in a stunning package bursting with extras, although the majority of them are from the 2003 UK special edition 2-disc DVD.

Disc one comes with two optional audio commentaries. The first is with director Michael Cimino in conversation with film critic F.X. Feeney. Cimino is on great form, with some terrific and insightful anecdotes. The second commentary track is with cinematographer Vilmos Zsigmond and journalist Bob Fisher.

Disc two kicks off with an interview with Cimino from a 1979 episode of ITV’s South Bank show. There’s also a new interview with critic and author David Thomson, sharing his recollections of the film and how it was initially received. Then there’s the three featurettes from the 2003 release. Realising The Deer Hunter – a 23-minute interview with Cimino, which is mostly fascinating because he looks like a washed up Vegas lounge singer, cigarette in hand, and massive sunglasses worn throughout.

Then we have Shooting the Deer Hunter, a 15-minute interview with Vilmos Zsigmond, and then Playing The Deer Hunter, a 15-minute interview with John Savage, who played Steven. Given how these special features have raided the archives, it’s a shame there is nothing from De Niro, Walken, or Meryl Streep. Or something about the great John Cazale, who died before the film was released. Finally, there is 17-minutes of deleted and extended scenes, including more from the Russian Roulette sequence.

Please note – this a review of the two-disc 40th anniversary blu-ray. There is also a 4K ultra-HD 4-disc box set. This comes with the two blu-ray discs, the UHD disc, and the original soundtrack of Stanley Myers’ beautiful music.  In addition to that, there are 5 art cards, a 64-page booklet about the making of the film, and a 72-page early version of the script entitled ‘The Man Who Came to Play’.