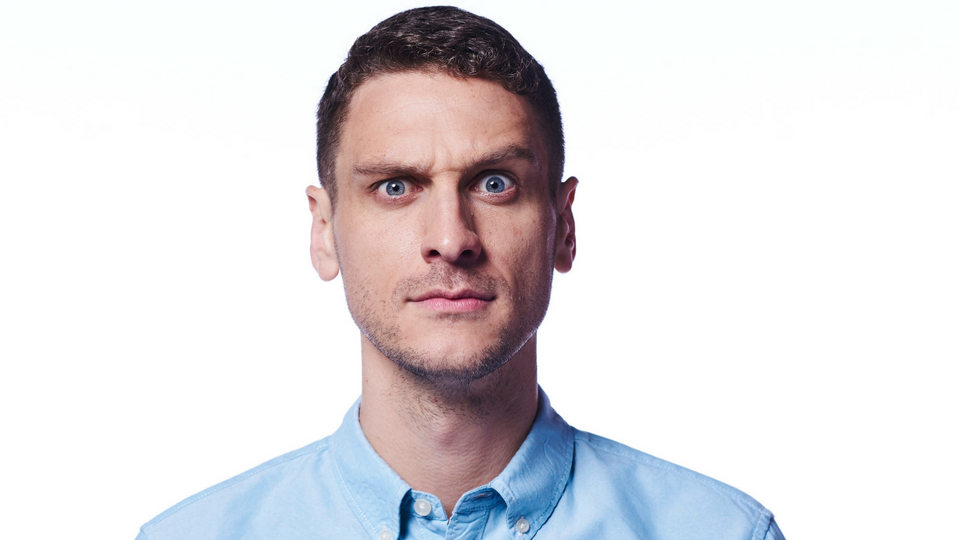 A one-man sketch show, you say? Sounds tricky to pull off, doesn’t it! Thankfully, we’re in the hands of a sketch and improv master who makes it look easy. As hip hop music pumps into the Underbelly, Steen Raskopoulos appears on stage, dancing, he urges the crowd to mirror his increasingly tricky moves from their seats to get the energy levels up from the off. Steen’s clowning around, playing with the space and drawing us into his world. ‘We’re only here in this room together once,’ Steen smiles and an upbeat start to the show sets a mood of anticipation: anything could happen.

With only a table and chair as props, Steen’s suddenly trapped in an interrogation room being questioned by, well, himself. Standing up, he sneeringly offers the empty chair a cigarette. Smoothly seating himself in an instant, he mimes accepting and eating it. It sounds preposterous, and it is, as Steen acts out silly situations and each subtle movement heightens the reactions and rising laughter from the crowd as we hang on every word and gesture. Steen is such an encouraging, likeable performer that, within ten minutes, he’s won the complete loyalty and trust of a guy from the front row who joins him on stage to attempt five push-ups using just two fingers.

At 18, Steen was crowned the youngest ever Theatresports National Champion of Australia. His skills in improvisation have led to several award-winning live shows, and also seen Steen star in the Australian series of Whose Line is it Anyway? and as part of the acclaimed improv duo, The Bear Pack. Confident but far from arrogant, Steen appears totally in control as he shows off an impressive imagination. He repeatedly breaks the fourth wall and leaps seamlessly between ‘real’ characters into a personification of the iceberg that sank the Titanic that’ll make you view the villain of that story from a new angle.

There are shades of light and darkness throughout the hour, Steen tugs at the heartstrings using humour to put a spotlight on abandonment issues, childhood bullying and crushing romantic rejection. There is a ‘trigger warning’ message on the door as you enter the auditorium and, without risking ruining the show, I cannot stress enough how powerful an ending Stay delivers. Knocking the audience entirely off guard, Steen’s deeply personal closing moments brings the meaning behind the phrase ‘tears of a clown’ into sharp focus. Without a doubt my pick of the Fringe 2018, Stay will remain with you for days. Go see it. You will laugh, cry and be reminded that every day is a gift and this hour with Steen is certainly not one wasted.