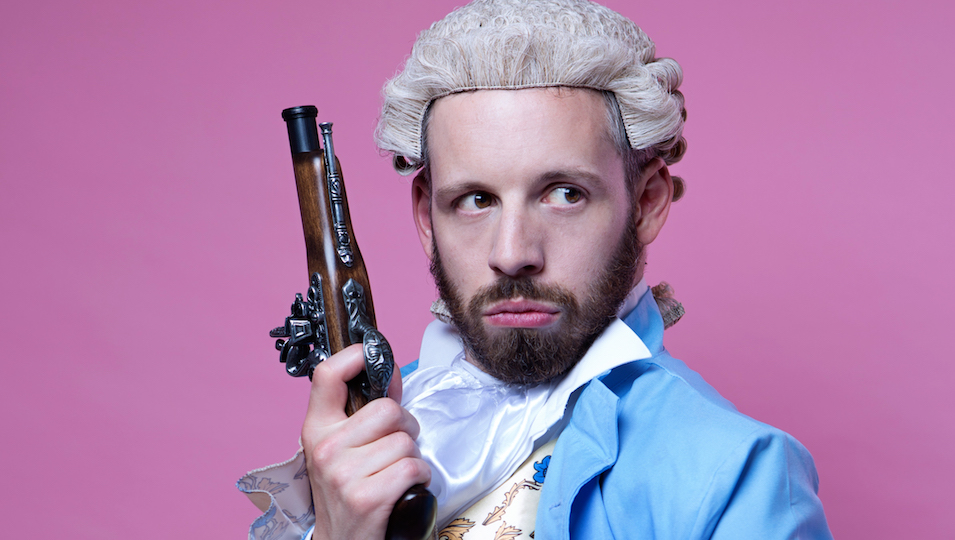 Nick Hall is an actor, character comedian, stand up comic and improv performer. He’s also got a History degree (2:2 BA Hons). What a show off. Nick possesses a glint in his eye that immediately lets you know that you’re in safe hands. Unlike Spencer Perceval some 206 years ago. He’s the only British Prime Minister ever to be assassinated. No-one’s heard of him, but Nick’s attempting to change that with this Edinburgh one-man tour-de-force.

Working within a tight budget, Nick sends plumes of talcum powder (representing dry ice) into the air, to signify time moving backwards. Strong opening gags about history in reverse come thick and fast. Reminiscent of BBC sitcom Red Dwarf episode ‘Backwards’, it’s funny to imagine how differently history might perceive the most evil men if their wrongs were to be undone.

The mood set for 1792, Nick adopts a silly costume, wig and Tristram Shandy-style persona for Spencer Perceval, as he narrates his own life. Acting as Spencer’s mother, father, wife, 13 kids, assassin and a variety of other characters, there’s a visual poetry to the sight of Nick miming breastfeeding a wig (doubling as baby Spencer). That 2:2 hasn’t been wasted!

Blending well-timed physical comedy, embellished facts and witty past-meets-present puns, Nick paints a picture of Spencer Perceval that we can sympathise with, even though he was in possession of white male privilege and a wealthy family with political connections. We learn that the 21st Prime Minister was unremarkable in his rise to power and, once there, Spencer was unpopular. We’re left second guessing when he’s going to get shot and who will be responsible?

Spencer’s last words were reportedly along the lines of, ‘Murder, murder, Oh God, I am murdered.’ Everyone laughs in response to this truthfully rather mournful nugget of information. The humour isn’t derived from Spencer’s death itself, of course. Historical characters, detached from our day-to-day reality, have always easily made larger-than-life figures of fun. Today’s politicians know too well what their public persona is and, more often than not, are ridiculed for it.

No political satirists will pass down impressions of Spencer from generation to generation. Only in power 200 days, he did not have time to make his mark. Nick’s vision of a rueful, ghostly Spencer turns detective to determine who did the dastardly deed. You’ll have to see the show to find out! Nick’s ability to morph between characters and voices seamlessly is an entertaining way to start your afternoon at the Fringe. A well-executed (pardon the pun!) show, it deserves a bigger audience. Give it a shot (again, beg pardon), you’ll learn and laugh a lot along the way.