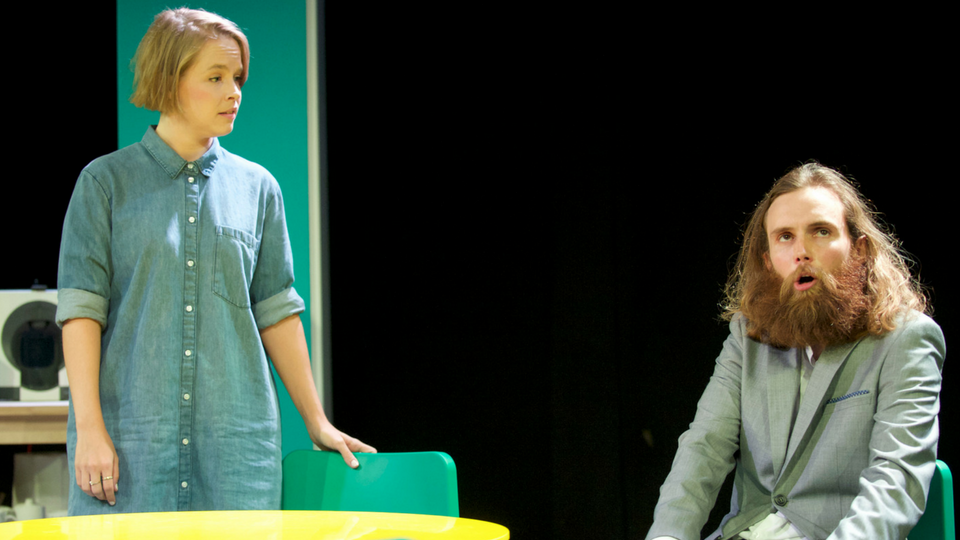 Comedian, TV / radio presenter and author Frank Skinner has turned his hand to almost anything throughout his career. Now, thirty years since his first Fringe show, he’s written his first play. BBC Arts and Avalon’s initiative DEBUT invited Frank to write and collaborate with emerging director Polina Kalinina. No, it isn’t about football. It’s arguably a little bit about coming home, though, if you interpret ‘home’ as the comfort you gain from your relationships with your partner and friends. Home can be not just the place you sleep in but who you choose to sleep in it with. Who you choose to confide in, too.

Nina’s Got News explores male and female relationships, their ability to make your emotions both soar and crushingly collapse, the friendships we lean on, and the difficulty of letting go. Nina’s news shall remain a secret – no spoilers – but the play is about how Nina’s ex-boyfriend Chris and her best friend Vanessa react to her revelation, and whether they can believe her.

The action opens to Chris entering with an Edam cheese, a cryptic gift for Nina. ‘Everything you’ve given me since we broke up has meaning behind it,’ she comments. He denies it but we know there’ll be a reveal (her thick skin drove a wedge between them), and so we’re invited to look for meaning behind their exchanges. The premise is set succinctly, and there are plenty of laughs as we learn about the two ex-lovers. Chris is still hoping to rekindle their romance. Counting the days since their break up, he’s kept a lock of her hair, he obsesses about their best sexual encounter and compares revisiting the memory of Nina’s vagina to ‘a fading reflection in his rear-view mirror’. You can count on Frank Skinner to turn masturbation gags into poetry. Lovelorn and loyal Chris (Rob Auton) has come running the moment Nina (Jessica Clark) calls, and, although Nina still holds affection for him as a friend, they both feel their sex life was over all too quickly, just in very different ways.

Frank’s voice shines through, particularly when Chris attacks the portmanteau ‘mansplaining’. Not for being anti-men, but for being a lazy play on words. Chris argues that it doesn’t work as a pun. ‘Man’ and ‘explain’ are just cobbled together without any thought put in. I agree. Perhaps ‘Dickscribing’ would work better?

The Pleasance Queen Dome, set in the round, lends itself well to the action centred around three players in Nina’s kitchen. This is a production of several firsts as spoken word performer and writer Rob Auton tackles a new skill treading the boards. Bearing his lack of professional acting training in mind, Rob’s portrayal of Chris is remarkably genuine. Although it can seem like he’s hiding behind his huge bushy beard and long hair, Rob portrays a touching vulnerability to Chris. A man who’s never far from letting a wry smile spread across his face or miss an opportunity to take the piss. Not a million miles away from Frank Skinner’s TV persona. Frank’s written Chris with much more heart than either of the two females characters. Jessica Clark (Call The Midwife) is likable even when a somewhat selfish Nina speaks with cold indifference to Rob’s feelings. She treats him like a plaything, loves the admiration. When Nina’s best friend Vanessa (Breffni Holahan) breezily enters the action with a sharp-tongue, teasing Chris and supporting Nina in her revelation, the two women gang up on Chris in a way that wouldn’t be as acceptable if gender roles were reversed. Frank Skinner’s birth name is Chris Collins. It could just be coincidence or perhaps a clue that there is semi-autobiographical detail in the script and Frank’s exorcising a few demon exes.

Frank is a practicing Roman Catholic and religion plays its part in clever dialogue and subtext. The play asks if we always need proof to believe our friends? Are we all, deep down, a doubting Thomas? In order to believe, we look for answers to our questions, we look to Science to man/womansplain what’s behind it all. If a friend tells you they are religious, do you support or mock them? Since learning that Nina’s moving onward and upward, it’s time for Chris to make his way to the exit. What will you make of it? Only one way to find out because, after all, you’ve got to see it to believe it. Right?