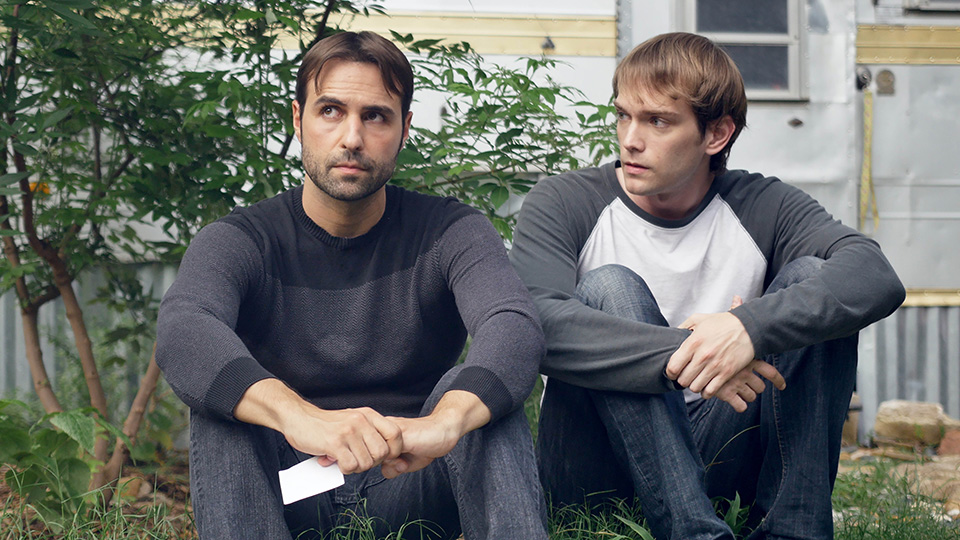 Vito Fortunato (Anthony J. Caruso) is preparing to give his life to the Catholic Church but struggling to leave his old life behind. Still going to gay bars and enjoying the nightlife with his friends, Vito is warned by Brother Mike (Gerald Brodin) that he needs to start taking his commitment to his new life seriously. An opportunity comes up for Vito to go to Texas to carry out some work in the community and upon arrival he meets hunky gardener Gabe (Derek Babb). As Gabe starts pursing him, Vito finds himself facing temptation and must decide what he really wants.

Brotherly Love is written and directed by Anthony J. Caruso and it’s based on the novel Seventy Times Seven by Salvatore Sapienza. The film sets out to look at the conflict between faith and homosexuality but it unfortunately is very surface-level. The premise of Brotherly Love is under-mined almost immediately by Vito’s sexuality being a non-issue with Brother Mike and his peers, which doesn’t seem particularly realistic. What the film them becomes is a matter of waiting to see how long Vito abandons his commitment to the church in favour of love.

One of the problems with Brotherly Love is that it’s incredibly predictable. The end is set out at the very beginning and you know when Vito goes to Texas, he’s going to seriously rethink his chosen path in life. The relationship he quickly builds with Gabe is rushed and it’s hard to see what either sees in the other, beyond a physical attraction. Vito’s ‘struggle’ seems to last all of five minutes as he continually puts himself in situations that he knows aren’t in line with the commitments he’s made.

The unrealistic and forced plot isn’t helped by the widely differing acting ability on display. Caruso never gets under the skin of his character and you can see him ‘acting’ from start to finish. He doesn’t bring a natural performance to the film and that’s jarring. Derek Babb is slightly better as Gabe but his character is so poorly written that there’s not a lot from him to do other than try to seduce Vito and look a bit disappointed. The one shining light in the whole film is Chance McKee as Vito’s best friend Tim. While he may not be in any danger of winning an award, he at least throws himself into the role with conviction and plenty of energy.

I really, really wanted to like Brotherly Love. As someone who has seen the way the Catholic Church can behave towards gay people, I hoped the film would give a real exploration of the issues and conflicts. Sadly it doesn’t and the religious aspect is simply a plot point to put a gigantic hurdle (which doesn’t prove to be all that gigantic) between Vito and Gabe, who probably wouldn’t actually fall for each any way. There’s sadly not a whole lot going for the film and it all feels like a huge missed opportunity.