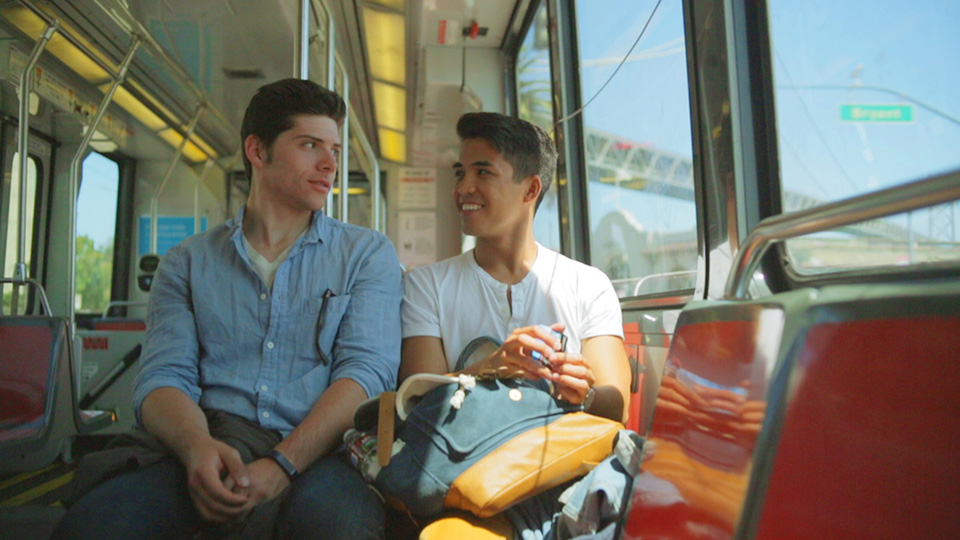 Cole (Kyle Cabral) arrives in San Francisco to attend the engagement party of his best friend Darren (Nathan Brown), whom he’s staying with. Not being completely honest with Darren, Cole has actually moved from New York and is trying to start a new life, and it transpires his former fling Max (Henry Lee) is also living in the city. Darren confides that his engagement was an accident and asks Cole to help him tell his fiancée Rebecca (Kai Liu) that he doesn’t want to marry her. Following a series of apparent coincidences involving sketches that Cole has made, the friends realise that Cole can change the future by drawing it, which may be the answer to both of their problems.

Paper Boys was originally released on Dekkoo as a six-part web series and it’s co-created by Kyle Cabral, who stars as Cole, with Curtis Casella. The romantic drama has a fantasy twist that at first feels a little jarring but quickly works itself into the story pretty effectively. Over the six episodes, the series explores the relationship between Cole and Darren as they try to help each other navigate their respective issues. Cole is still hankering after his ex Max and Darren can’t muster up the guts to be honest with his fiancée.

Over the 6 episodes, the show does an impressive job of fleshing out its characters. Cole and Darren both go through quite the journey as they try to figure out what they want from their lives. The scenes with Cabral and Brown together are the best in the series and the two actors really connect on screen. Their chemistry is palpable and I did wonder around the half way mark if a curveball was coming and they were going to hook up. Alas that doesn’t happen but it’s refreshing to see that Darren has no hang ups about accompanying Kyle to a party attended solely by gay men.

What Paper Boys explores very well is dishonesty among friends. Cole and Darren aren’t all that honest with one another, or themselves, yet they can see where the other is struggling. Cole won’t admit that he followed his ex to San Francisco while Darren desperately wants to get out of his engagement but isn’t in a rush to do anything about it. They call on each other, something that ultimately backfires on Darren, and Cole’s behaviour is a little bit on the shitty side at times. As soon as he’s in Max’s radar, he doesn’t care all that much about his friends.

Paper Boys is a sweet series that provides plenty of entertainment and doesn’t outstay its welcome. The cast does a great job and they bounce off one another throughout. I’m still not 100% that the fantasy twist was necessary but it did bring something different to the series. I would definitely be interested in continuing to follow these characters so fingers crossed another season is in the works.