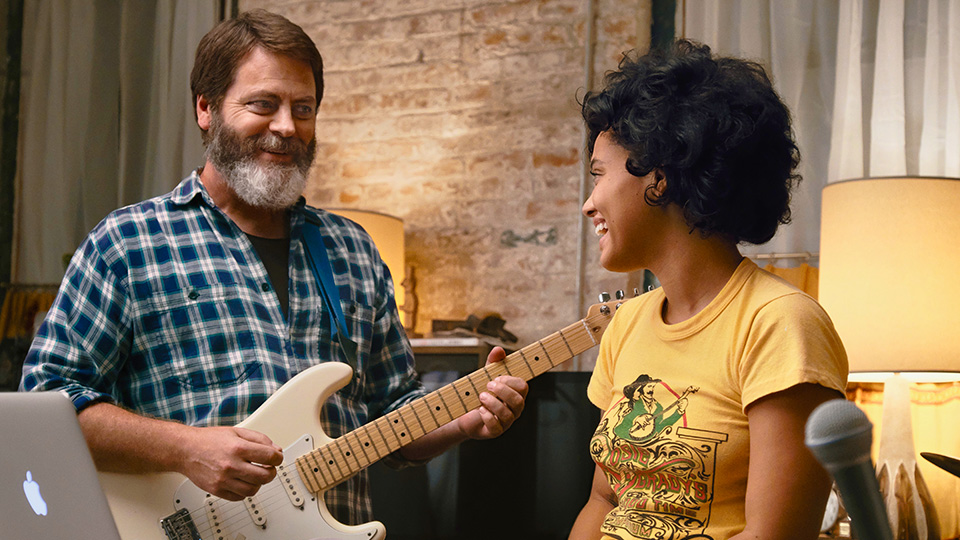 Frank Fisher (Nick Offerman) is the owner of an ailing record store facing closure when the building’s landlord Leslie (Toni Collette) announces that she has to increase the rent. As Frank deals with the not wholly unexpected blow, he also faces having to say goodbye to his daughter Sam (Kiersey Clemons) who is intent on moving across the country to go to college. Aware that his daughter possesses a musical talent that she doesn’t realise the strength of, Frank attempts to force her into forming a band with him in the hope that she doesn’t flee the nest.

Hearts Beat Loud is the latest feature film from emerging writer/director Brett Haley. Having made waves with I’ll See You in my Dreams in 2015 and The Hero in 2017, both starring Sam Elliott, Haley’s latest offering is shaping up to be his biggest film yet. Essentially a study of the relationship between a single father and his daughter, Hearts Beat Loud has an emotional pull as it also tackles the theme of loss in a variety of ways.

What’s so interesting about Hearts Beat Loud is watching the dynamic between Frank and Sam unfold over the course of the film. Having lost her mother, Sam only has her father to lean on and it’s clear from the very beginning that Frank has become increasingly reliant on her. At times it feels like the roles are reversed as Sam takes on being the parent as Frank desperately tries to keep his daughter at home. At the same time Frank is trying to keep his mother Marianne (Blythe Danner) out of trouble as her dementia has led her to unknowingly commit petty crimes.

While the film may take a liberty or two to advance the story, which I have to say didn’t bother me in the slightest, Hearts Beat Loud is an incredibly engaging and compelling story. The scenes where Frank and Sam are making music together, and an epic mini-concert that takes place later in the film, are among the film’s best moments. The chemistry between Offerman and Clemons is at its most potent in those sequences and the music is very memorable too.

An aspect of Hearts Beat Loud that I very much liked was that Sam’s sexuality is treated with no fanfare. She has a girlfriend, Rose (Sasha Lane), and while the film suggests her father may not be aware of her sexuality, it’s later revealed he has a very relaxed attitude to it as long as his daughter is happy. That’s the kind of positive representation that will help to normalise LGBT characters in film and it’s incredibly refreshing that her sexuality isn’t used as a plot device.

Haley gets stellar performances from his cast. Offerman shows that he can play a character very unlike his iconic Parks & Recreation persona Ron Swanson. While he still gets to showcase his humour here, the role is more dramatic than I’ve seen from him previously and he nails it. Kiersey Clemons is the breakout star. She’s been on the rise for a while but this is the kind of performance that will take her to the next level. The maturity and understanding she brings to Sam is remarkable.

Smaller turns from the supporting cast – Toni Collette, Ted Danson and Blythe Danner – leave an impression too. Sometimes starry casts can ruin a film but here they are well-written and used in a way that adds to rather than detracts from the film.

Hearts Beat Loud is one of the best films I’ve seen this year. It’s the perfect antidote to the CGI-dominated blockbusters that take most of the box office money during the summer. With a whole lot of heart, stellar performances and an emotionally engaging storyline, not to mention the fantastic music, Hearts Beat Loud is a film you need to make time to see. You’ll laugh, cry and feel all the feels, what more could you possibly want from a film?