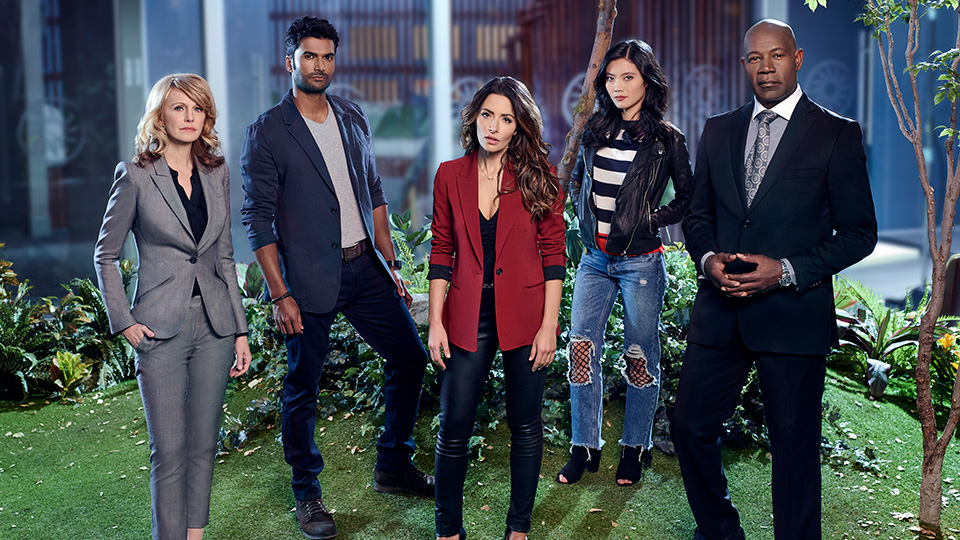 Sarah Shahi has an extensive list of credits but it was her role in The L Word as Carmen de la Pica Morales that gave her a huge breakthrough.

Since then she’s starred in hits series such as Fairly Legal and Person of Interest, and her latest project Reverie is about to hit the small screen here in the UK. In the show Shahi plays the lead character Mara Kint, an expert in human behaviour and a former hostage negotiator.

I caught up with Sarah recently to find out more about the show, discuss the impressive ensemble cast, and to talk about the upcoming revival of The L Word.

Reverie is coming to the UK this week. Tell me a little bit about the show and what people can expect when it debuts…

The show is kind of like Inception meets Alice in Wonderland. I play this character who gets recruited to work at this virtual reality firm where people can essentially go in and design these alternate destinations for themselves. Their perfect ideal escape. The problem is that they’re liking it so much they don’t want to come out and they’re going into comas on this world. I play somebody who has to go in and basically figure out how to get them out before they die and it’s too late. Meanwhile there’s a supernatural element to the show where you learn in the pilot episode that my sister and my niece have died. Throughout the course of the show they start coming out of the program so to speak and start haunting me. Then there’s the bigger question of am I going crazy? Is this really happening? What’s going on?

The show has a really incredible cast that includes Dennis Haysbert and Sendhil Ramamurthy. What’s it like to work with an ensemble like that?

Oh they’re wonderful. When we were filming this every day it was like playing in the playground. All casts always talk about how much chemistry they have and how they instantly get along but we actually did. It was like winning the lottery, going to work every day to the cast and the crew question. We shot at the Universal lot, which was wonderful because during lunch time we would all sneak up to where the rides were in the park. We would all ride the rides together and have a Butterbeer before going back down.

You’ve played a lot of different characters over the course of your career so far and the role of Mara seems a little different for you. What attracted you to this role?

Well it was interesting because as fate would have it, right before I got the offer for this job, my father died. where I thought the officer would drop my father died. He and I were not very close but it was through his death I actually was able to kind of have a relationship with him. I just found myself getting closer to him and I got a sense that there was so much more to this world than what our eyes could see because I just started feeling him around me and I started having a relationship with him. A couple months after that I got the script and it was about a character who was traveling between these two worlds and she’d lost her sister and her niece, and I felt like this was an opportunity to have my therapy on camera and really allow myself this grieving process to happen through my work. That was my biggest motivator.

The concept of the show is very timely, especially give then uncertain political times we live in. The idea that you can switch off from reality and spend your time in your idea of perfection…

Yeah absolutely! I think that escapism is something that’s always been important in entertainment. The producers of this show are Amblin Entertainment… Steven Spielberg and there’s a bit of a spiritual message subconsciously in all of his movies but it’s also just a fun ride. It’s fun escapism and that’s exactly what this show is.

What would you say has been the biggest challenge for you in playing Mara?

The biggest challenge for me was doing the green screen at times because I had never done green screen before. There was an element of green screen where you need to be so specific. I needed to know so much more than what I would know if I were working on something that was scripted. It’s not enough just to let your imagination take over. I had to know exactly when is that butterfly going to be crossing my eye line so I can react to it. Is the wind blowing in my hair? How cold is it? I just had so many more questions and that was something that I hadn’t done before the show. There were times where that was a challenge.

I did a movie called Judy Small, which is an office romantic comedy with Haley Joel Osment, Rob Corddry and Alicia Silverstone. Right now I’m in Seattle filming this movie called Language Arts and it’s a drama about a family that falls apart based on the child’s autism. I’m doing that right now, which is fairly heavy.

That sounds like a nice mix of projects you’re working on with very different characters and weighty material. Does it excite you to be able to play such different roles?

It’s very exciting. The biggest kick that I get out of it is that I’m the mom to three young children so I take jobs just so I can relax. If anything it’s given me an opportunity to sleep in a couple of mornings a week (laughs).

There’s lots of talk about a revival of The L Word at the moment. What have you heard about that and will you be involved?

Yeah! It’s happening… everything is happening. It’s all in the early stages of development but it’s real, it’s coming back, I’m in it and all the girls are in it.

Why should viewers in the UK tune in to Reverie when it begins this week?

They should tune in because… I’ll tell you a quick little story Pip. When I was a little girl, my dad was abusive so my mom and I were in and out of women’s shelters. There were these certain shows that the shelter would air and when I watch those shows, I remember it was my only escapism. I felt light and I felt fuzzy… I was transported to another space and time, and I forgot about my life. I remember watching these shows thinking, ‘oh that’s it that’s what I want to do. If I can give this feeling to another person then that’s my journey’ and that’s what this show does. It’s pure escapism, it’s quality television and if I can make someone feel those light, fuzzy, warm feelings then I’ve done my job.

Reverie premieres on Syfy at 9pm on Thursday 2nd August 2018. Watch the trailer for the show below: