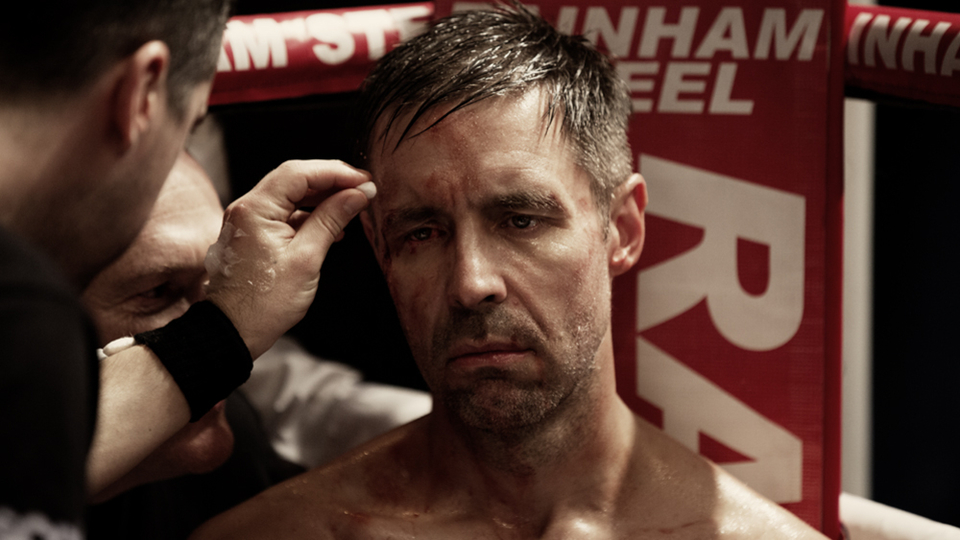 Anyone who has followed Paddy Considine’s career, and heard him in interviews will know that he is a big fan of boxing, and of boxing films such as Rocky and The Champ. His own contribution to this rich and varied canon is Journeyman, a bruising and deeply affecting drama about the toll this sport takes, but also the will it instils to fight back.

As well as writing and directing the film, Considine plays Matty Burton, a pro boxer, who at the end of a long career becomes the middleweight champion of the world. His first defence is against a hungry, undefeated young fighter. After a brutal 12-round encounter, Matty wins on points, and returns home to celebrate with his wife Emma (Jodie Whittaker). Whilst Emma is in the kitchen, Matty collapses. When we next see him, he is beginning the long and life-altering recovery from a traumatic brain injury. He can barely walk, talk, or remember who he is.

Eschewing the obvious redemptive arcs, Journeyman is a boxing movie more about the people than the sport. The people who bravely (or foolishly) put their fragile bodies and souls on the line for the sport they love, and the people who have to try and put them back together.

Paddy Considine is on sensational form, both in front of and behind the camera. Journeyman is a less ferocious form of human drama than his searing debut Tyrannosaur, but as you would expect from the director of that film, he pulls no punches. He keeps everything close and contained around Matty and Emma. This is their story, and Considine captures every moment with a real intimacy and sensitivity.

Jodie Whittaker delivers a brilliant performance in a difficult role. She is completely believable as Emma – a wife and mother put through the wringer – and goes through every conceivable emotion in this film. Her sense of loneliness and isolation is palpable as she desperately tries to help this vulnerable stranger in her home remember that he was once her husband. It is heartbreaking stuff, and a testament to carers everywhere.

There’s a real authenticity to Journeyman, which comes from Considine’s close work with both the boxing and medical community. He brilliantly observes that in his incapacitated state, Matty is a very dangerous person. Brain damaged, unable to remember things, filled with rage and frustration at his situation, he lashes out with those fast boxers hands.

It can be a tough film to watch at times, but Considine punctuates the drama with moments of real tenderness and beauty between Matty, Emma, and their baby daughter Mia. When Matty returns home from defending his title and breaks down in tears in Emma’s arms, you’d have to be made of stone not to be choked up. Likewise, the visit from his last opponent, Andre Bryte (Anthony Welsh) is quietly devastating.

But ultimately this is Considine’s film. It’s a stunning central performance, worthy of winning every award. It is so nuanced and complex, he finds beautiful minute details amid the confusion and pain of Matty’s recovery.

Another reason to love Paddy Considine, as if we really need it, is that in the special features there is a joint interview between himself and professional boxing trainer Dom Ingle. It’s only a short interview, but instead of it being like every other boxing movie, where some old pro is trotted out to tell you that by the end of the actors training they were good enough to turn pro, Considine and Ingle cut right through that hoary old bullshit. Paddy talks candidly about a scene of sparring that they shot with a real boxer, and they had to cut it because it looked ridiculous.

But that is what is so brilliant about this film. Considine is too old to be believable as the middleweight world champion. He isn’t ripped to shreds like Miles Teller in Bleed for This or Jake Gyllenhaal in Southpaw – but he doesn’t need to be, because the story is so believable, and so beautifully told, it pulls you in and you forget all of that superfluous, method aesthetic rubbish. Journeyman has the confidence not to need any of that.

Elsewhere on the disc there are a couple of extended scenes, and a terrific commentary track with Paddy Considine. It’s a crime that so few people saw this film at the cinema. I really hope it climbs off the canvas for a rousing comeback on DVD.