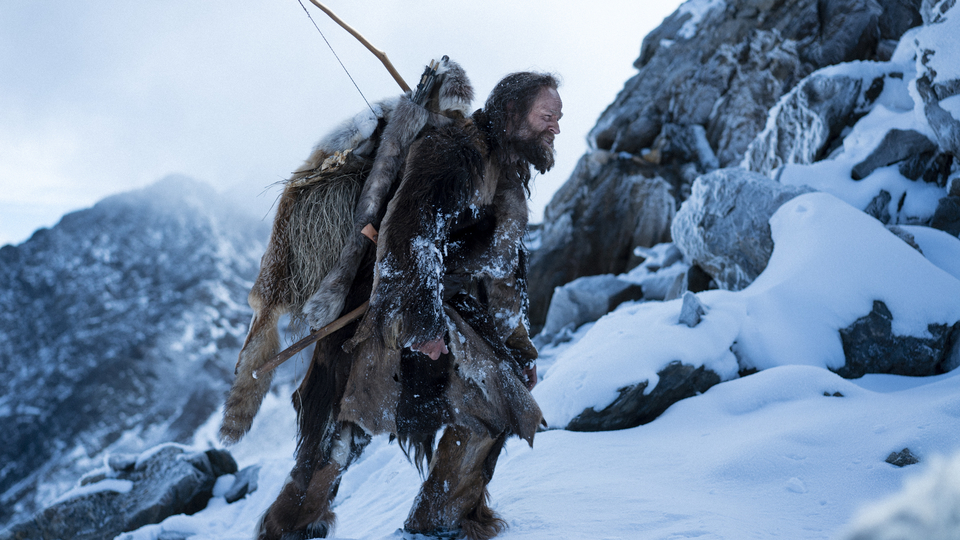 The remarkable true story of the Iceman was big news when he was uncovered for the first time on 19th September 1991. Becoming somewhat a modern-day legend, the Iceman (known as Ötzi) was found by two German tourists in the Ötztal Alps on the Austrian–Italian border. This well-preserved mummy is believed to have lived around 3,300 BCE.

Now a film has arrived that aims to fill in the gaps of Ötzi’s life with a fictional tale about the story behind the man – delving into the possible circumstances that eventually led to the Iceman being frozen. Writer/Director Felix Randau has taken cues from The Revenant to deliver a visceral cinematic experience that certainly engages in a tale of brutal revenge and survival.


We start with Kelab (Jürgen Vogel), the leader of a Neolithic clan whose people have settled and live in peace with the land. Kelab and his wife (the always reliable Susanne Wuest) have a simple but happy life, and are well respected in their circle. One day Kelab goes deep into the mountains to hunt for food but whilst he is away a group of savage marauders arrive in his village and pillage it. Returning to find devastation and death, Kelab goes on a mission to track down the murderers to exact his revenge.

The first thing that grabs you is the sheer beauty of the cinematography and also the scope director Randau gives to the picture. It’s expansive and you get a very real sense of the vastness of the land, especially with establishing shots that gloriously take in the serene beauty of the terrain from afar. It does take a lot of cues from The Revenant but that’s not a bad thing, and the journey Kelab takes is one that you can easily champion, even if certain trappings remain familiar to the viewer.

Most of the heavy lifting is done by Jürgen Vogel as it’s essentially his one man film. It was a shame Susanne Wuest couldn’t have been used more as there was good chemistry to explore between Kelab and his wife to give the film more of a balanced back-story. But that said, it moves at a frantic pace and keeps momentum going by the dogged chase – broken up slightly when Kelab meets an old man (screen legend Franco Nero) and his daughter on route. It’s a well-paced segment that pauses for breath and gives us a rare glimpse into Kelab as a man and what drives his principals. More of this would have been a welcome addition.

Check out our Iceman interview with Susanne Wuest

The scenes of conflict are where the film really finds its feet. It’s brutal and shot very well to really give you a good sense of the immediacy of the moment. The savagery is there, but as the film progresses you see other sides to the story. It’s not as black and white as it seems, but even then the film never loses sight of its main objective (that of a revenge film) and that’s commendable.

Iceman is a worthy watch, even if the premise is quite familiar. It was an interesting concept to try and give the Ötzi a back-story and it’s executed well enough by everyone involved. Felix Randau has tried to populate a story around the first unsolved murder case in the history of mankind, and that’s a bold undertaking. It’s not a history lesson though so you should know that going in. But nevertheless Iceman does deliver, and is a well-made movie that peaks your attention.