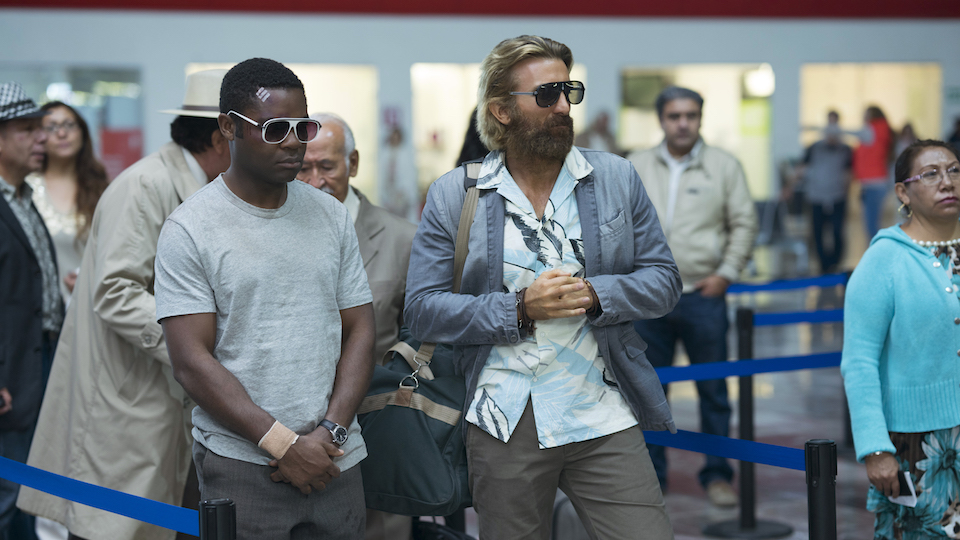 Films like Gringo were commonplace in the post Pulp Fiction landscape of the mid to late 90s. Non-linear, violent thrillers with retro needle drop soundtracks and characters talking shit about pop culture were very much de rigueur. Then suddenly they weren’t. Films like Go, 2 Days in the Valley, Things To Do In Denver When Your Dead, Swingers, The Boondock Saints, and Lock Stock and Two Smoking Barrels stopped being made. The increasing levels of self-referential pastiche eventually led to the sub-genre eating itself.

So it comes as quite a surprise, and not an entirely unpleasant one, to find Gringo, the new film from stuntman–turned-director Nash Edgerton has gone back to that post-Tarantino well, and drawn a pretty decent film from down there. Starring David Oyelowo, Charlize Theron, and Joel Edgerton, Gringo is a fast-paced and fun exploration of the corporate and criminal cartels running America, and the poor bastards caught in the crossfire.

Oyelowo plays Harold Soyinka, an accountant at an American pharmaceutical company. The films opens with a phone call from Harold to the two executive officers of the company, Richard (Joel Edgerton) and Elaine (Charlize Theron) screaming that he has been kidnapped in Mexico and held to ransom. We then cut to two days earlier, where Harold, the nicest and hardest working man you are ever likely to meet, discovers that his wife (a drastically underused Thandie Newton) is cheating on him, that his employers have been conducting some nefarious business with a Mexican cartel, and that Richard and Elaine are going to fire him. So he fakes his own kidnapping.

Before long we have fake kidnappers, real kidnappers, DEA agents, mercenaries, a drug lord obsessed with The Beatles, and a couple of nobodies (Amanda Seyfried and Harry Treadaway) in Mexico for a small-time smuggling job all trying to stay one step ahead of the other. The film barely stays on the rails, going through all kinds of narrative gymnastics to try and make sense of it all. Seyfried and Treadaway are the biggest casualties, with their subplot being completely superfluous, so much so that they disappear for long stretches of the film and we barely notice they’re gone.

Thankfully the film has a couple of aces up its sleeve, in the splendid performances from David Oyelowo and Charlize Theron. Oyelowo’s Harold is a terrific lead character, honest and morally virtuous, yet he makes one bad decision after another, putting himself in increasing levels of danger. He is also hilarious. Whether he is faking his own ransom call, getting vey drunk, or screaming at the top of his lungs once the bullets start flying, he is a comedic delight. More comedy for Mr Oyelowo please.

As for Charlize Theron, this is one of the most despicable characters she will ever play. Whilst Joel Edgerton’s Richard is a scummy douchebag of the highest order, the mercilessly politically incorrect Elaine is the true monster of the film, and she gets all the best lines. Most of which you cannot believe she has just said. But the highest praise needs to be reserved for the director. This script is wildly uneven, the plot is all over the place, and some of the dialogue is so crass and offensive, Gringo could easily have been a disaster. That Edgerton, in only his second feature film as director, has guided this script into a fun, funny, and almost coherent film, that is only offensive when it’s meant to be, is something of a triumph.

There is a lot to admire about Gringo. It’s an ambitious film, and actually has something to say about the rotten centre of the American dream, and the corrupt state of the modern world. It never fully goes as far and as hard as it perhaps could to really drive home it’s message, but it’s ultimate goal is to entertain, and despite the chaotic plot it succeeds at that from the first minute to last.

The blu-ray disc comes with four short featurettes, going behind-the-scenes of Gringo. One focuses on the location shoot in Mexico, another on the stunt-work, there is a perfunctory making-of, and finally a short piece about the character of Harold. It is a scant selection; nothing more than clips from the film interspersed with a few on-set talking head snippets from the main cast and the director, some of which are repeated.