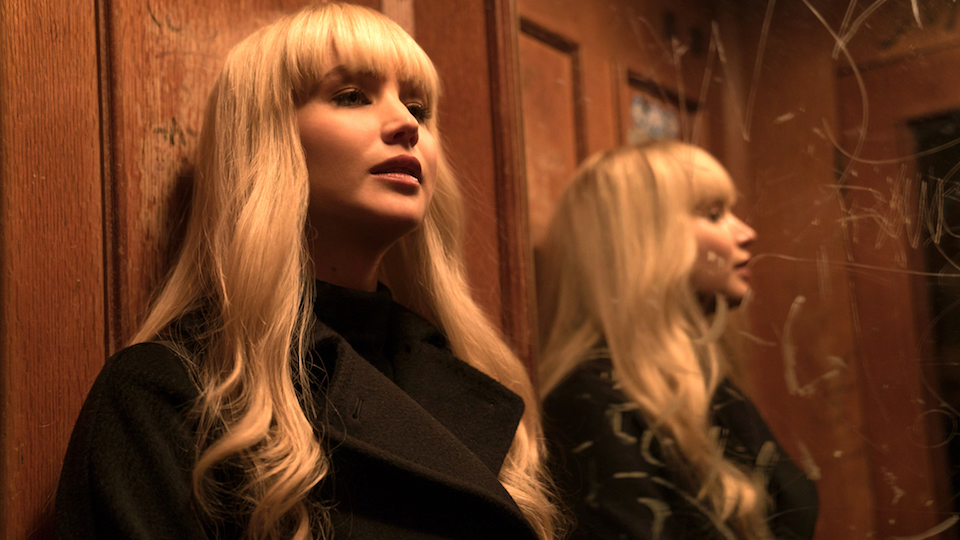 There is a mole in the SVR (Russia’s Foreign Intelligence Service). CIA Agent Nate Nash (Joel Edgerton) knows who the informant is, and will protect his prize asset at all costs. Rookie SVR officer Dominika Egorova (Jennifer Lawrence) has been tasked to uncover the mole, by any means necessary. It’s a great setup for a playful cat and mouse thriller. But be prepared, for Red Sparrow is a film intent on confounding your expectations.

Directed by Hunger Games veteran Francis Lawrence, and based on the book (the first in a trilogy) by former CIA agent Jason Matthews, Red Sparrow drops you head first into the world of international espionage and complex spy-craft and expects you to keep up. The narrative is split into two distinct strands, following Nash and Egorova separately as they weave and dance around each other, before their fates inevitably become intertwined.

Judging by the trailers and posters, Red Sparrow could easily have been mistaken for a high-octane, sexy spy thriller like Atomic Blonde or Salt. Some even joked that we might be finally getting the solo Black Widow movie we’ve all been waiting for. Well, think again, because no matter what you’ve heard, let me assure you there is nothing high-octane or sexy about Red Sparrow. A grown-up, slow-burning, morally murky, and uncompromisingly violent spy movie, it owes more to the works of Deighton, Le Carré, and Cruz Smith than any cinematic blockbuster.

When we first meet Dominka, she is a prima ballerina who suffers a horrible, career ending injury whilst on stage. Sensing her potential, her Uncle Vanya (no, really), a commander in the SVR played by Matthias Schoenaerts recruits her for a honey-trap mission with one of Putin’s enemies. When the mission turns into a literal bloody mess, Dominika becomes a target for assassination herself. Vanya offers to protect her – and also ensure that her ill mother is looked after – but in return she must start working for him.

Dominika is sent to Sparrow School. Here under the tutelage of Charlotte Rampling’s matron, the recruits (both male and female) are taught how to use their bodies as weapons. How to dress, how to move, how to seduce and deceive and elicit information from targets. This is why she is sent to Nash: as a professional femme fatale to seduce him, discover the mole, and then destroy him.

The sexual politics at the centre of Red Sparrow are very questionable. Dominika is coerced into this world against her will. At Sparrow school she is debased and dehumanised. Stripped of all her clothes and all her agency, her body turned into nothing but a tool of the State. She has to fight off numerous attempted rapes. When her loyalty is questioned, she is again stripped naked and tied up in a cell whilst sprayed with water. But she stands up to all of this. Is this empowering? Or is it deeply problematic? Where you land on those questions will ultimately decide how you feel about Red Sparrow.

Full of twists, shifting alliances, and complex spy craft, Red Sparrow delivers on the cerebral, but not so much on the visceral. The plot is very dense, and the authentic language makes no concessions to viewers unfamiliar with the terminology of the spy game. All of which means it’s not always the most entertaining film to watch.

Even with lots of sex, disturbingly graphic violence, and another terrific central performance from Jennifer Lawrence, the film never reaches the level of exhilaration you expect. Lawrence is immensely watchable as always, even rocking a vampish Russian accent, she is completely convincing. It’s a shame that the film around her can’t quite keep up. Ultimately, Red Sparrow is a mature thriller for grownups, the kind we should be glad are still being made. You can’t help but wish it was just a little more exciting.

The blu-ray release comes packed with special features, however as is so often the case now, the DVD is given a far less impressive release, with just a director commentary and a few deleted scenes.