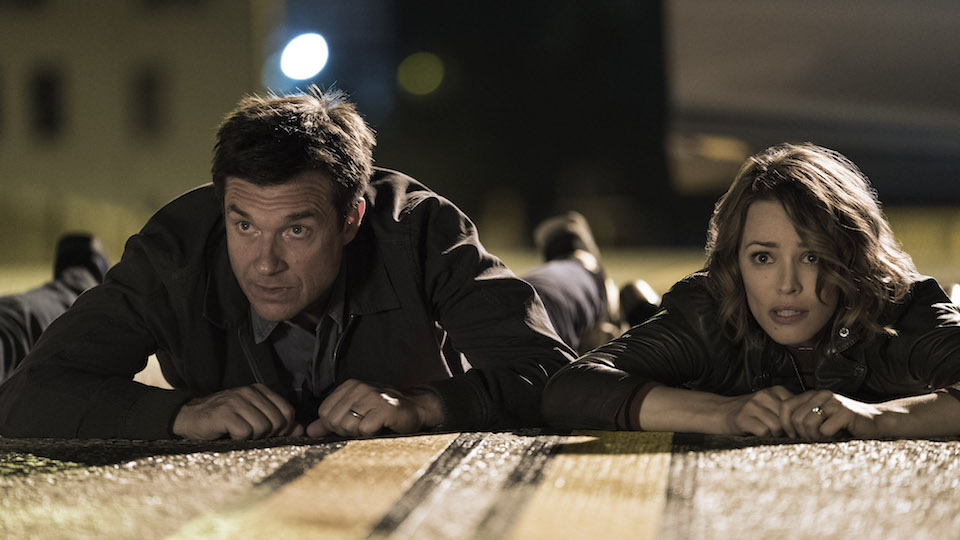 I haven’t laughed this much at a film in years. For too long now, mainstream American comedy has relied upon – and some might say been plagued by – overly chummy improv. You know the type – it’s that SNL/Apatow style of one-upmanship, where the actors spend all their time trying to make each other laugh and completely forget about the audience in the process. Game Night however, is proof positive that a great script defeats improvised banter any day of the week.

Directed by John Francis Daley and Jonathan Goldstein, from Mark Perez’s fantastic screenplay, Game Night sees Jason Bateman and Rachel McAdams as ultra-competitive married couple Max and Annie, who host a weekly game night with their friends. When Max’s successful and charismatic brother Brooks (Kyle Chandler) rolls into town, he raises the stakes from the usual quizzes and board games, by engaging the group in an interactive role-playing mystery game.

When one of them is violently kidnapped, the shit gets very real, very quick. You can almost imagine the pitch to the studio: “It’s David Fincher’s The Game, but funny.” And boy oh boy does it ever deliver on that premise. Well paced and wittily directed, Game Night has visual style, fully realised characters, and an actual story that maintains momentum throughout, unlike so many other bloated high concept comedies.

The cast are terrific, and more importantly, they are all on the same page. No one is trying to steal the show. McAdams and Bateman have incredible chemistry, and make such a great comedic double act. A scene between them of DIY bullet removal had me struggling to breathe I was laughing so much. Bateman is in his element here, with material perfectly suited to his deadpan style, but he is more than matched by McAdams, who is on sensationally funny form. Her reaction to something that happens quite late on in the film will surely go down as one of the best movie moments of the year.

They are ably supported by a brilliant ensemble cast, including Lamorne Morris, Kylie Bunbury, Sharon Horgan, and Billy Magnussen. They each have their own stories and little adventures to go through, and are all given moments to shine. Morris and Bunbury, who play married couple Kevin and Michelle have a great running sub-plot about the celebrity she once slept with, revealed during a game of Never Have I Ever. But the film is very nearly stolen from under everyone by Jesse Plemons. Best known for his dramatic film and television roles, he is hilarious as Max and Annie’s creepy cop neighbour, who just wants to be included in the game.

I’d be very surprised if we see a better mainstream comedy than this all year. Yes there is a very slight and temporary dip in the third act, but it in no way detracts from the overall enjoyment of the film. What really sets Game Night apart from other recent comedies, is the sharp and inventive direction. There are two hilarious scenes, one involving a bribe, and the other involving a luggage conveyor belt, that really emphasise what a difference it makes to properly direct a comedy film, and not just point a camera at funny people and expect them to be funny.

The blu-ray disc is unfortunately a bit light on special features. There is a very perfunctory behind-the-scenes featurette which is so short it feels as if it was snipped out of a much more comprehensive piece. There is also a gag reel, which is a lot less funny than the actual film. But hey, when the film is this much fun, who gives a stuff about the extras.