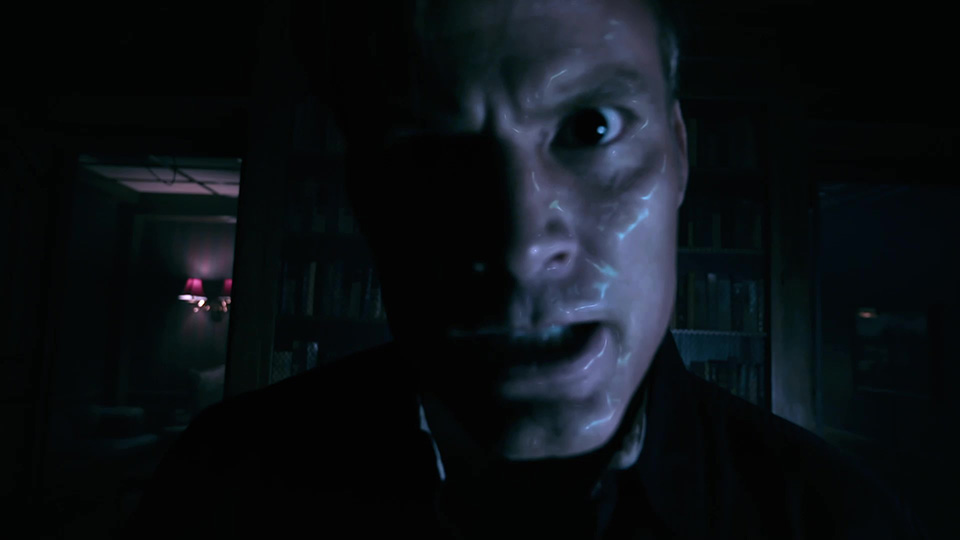 Film-maker Daniel (Zachary Mooren) is hired to shoot behind-the-scenes footage for horror movie Darkness Reigns starring Casper Van Dien. As he arrives with his crew at the supposedly haunted location, Daniel starts to capture some disturbing things on set and he wonders if there’s any truth to the urban legend. When a catastrophic accident takes place on set, Daniel and the film’s cast and crew are thrown into a nightmarish world as they try to escape with the footage they’ve captured and their lives.

Darkness Reigns puts a nice twist on the found footage genre. It’s established in the opening moments that Daniel survived the ordeal but who else made it out alive is up in the air. He is seen presenting his footage to a packed cinema and seems tormented by what happened. From there you’re taken back to the start of his filming as he arrives on set for the first time, is warned not to bother star Casper Van Dien and captures a truly shocking moment on camera. I don’t want to give too much away about that moment as it truly did take me by surprise.

It’s at that point the film ramps up and I was pretty impressed. Doing horror on a small budget can go one of two ways; it can force the director to be creative or it can just look cheap. Darkness Reigns goes the creative route with director and writer Andrew P. Jones putting together a very nicely done film. Visual effects are used sparingly with camera trickery taking care of the majority of film’s scares. It’s a wise decision and Jones creates a very atmospheric horror film that allows the audience’s minds to run away with them rather than handing them everything on a plate.

Casper Van Dien is brilliant playing himself. He’s not frightened of letting loose or sending himself up and he does both in this film. Van Dien leads a solid cast with great turns from Zachary Mooren, Linara Washington and Jennifer Wenger. Every cast member captures the realistic feel of the film and you get the impression they had an absolute riot filming it.

Darkness Reigns does have some issues too. The wordy and introspective opening moments feel unnatural and the script could probably have done with another polish before it started shooting. To be honest though, Darkness Reigns isn’t aiming to be an award-winning masterpiece, it’s just here to entertain you for 75 minutes which is exactly what it does.

As someone who watches a lot of horror films, good and bad, I was pleasantly surprised by Darkness Reigns. I went into it sceptical but came out having thoroughly enjoyed the ride. I’m keen to see what Jones does next and if it’s half as fun as this, it’ll be worth checking out. Darkness Reigns knows what kind of film it is and it has a lot of fun operating within its well-established rules. I thought it was an absolute hoot!