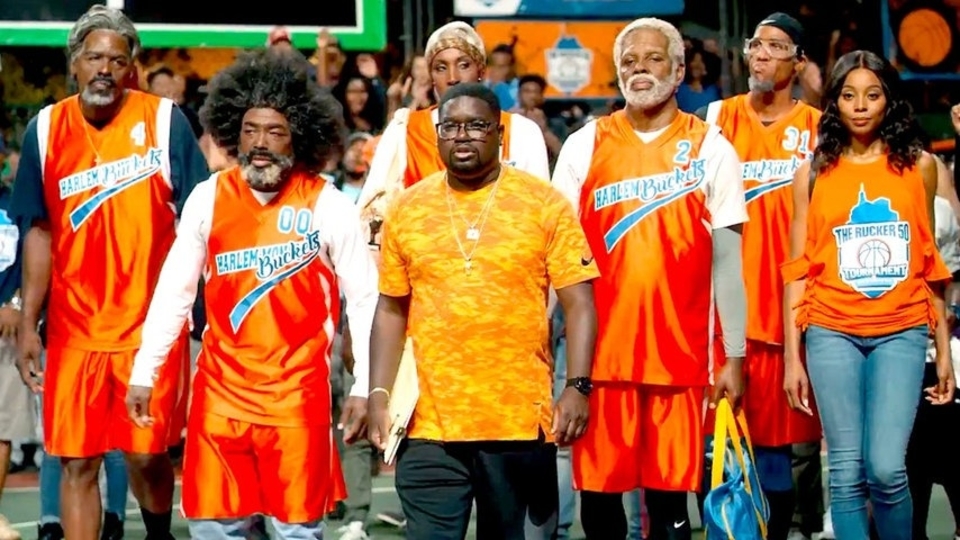 Underdog stories aren’t new in the world of Hollywood movies and Uncle Drew follows the formula to the letter, offering no real surprises but a hell of a lot of heart. It’s a fun ride which is all the more surprising given that this film is based off a commercial for Pepsi.

Pepsi, who also produced the film, have taken an idea and spun it into a perfectly entertaining and watchable film with a few belly laughs, a solid ensemble and some brilliant basketball along the way. Sure, there’s quite a bit of Pepsi branding scattered throughout the film but it’s fine, especially now that Hollywood has become accustomed to making films based on odd ideas like board games (Battleship) and even playground games (Tag). Uncle Drew wears its heart on its sleeve and that’s its saving grace.

The story follows Dax (Get Out’s Lil Rel Howery), a down on his luck coach who has a demanding and superficial girlfriend named Jess (Tiffany Haddish). She soon leaves him for his arch-nemesis Mookie (Nick Kroll), a rival coach who not only steals his woman and his prize player (Aaron Gordon) but who also blocked Dax’s championship-winning basketball shot when they were kids, causing Dax to love the game from a distance as a coach, but not play it anymore due to fear.

With financial ruin on the cards, Dax has to find a new team to compete in the upcoming Rucker Classic tournament with a big cash prize for the winners. He hears of a local legend named Uncle Drew (Kyrie Irving) who was the best basketball player of his generation before he vanished. A chance encounter sees Dax inadvertently stumble across Uncle Drew schooling some young players on the game. Impressed with what he sees, Dax convinces the old timer to play on his team with one rule – he must also recruit Uncle Drew’s former teammates. So begins a road trip to find all of his old buddies before the tournament comes around and they have to get down to business.

For those not familiar with the NBA stars that appear in Uncle Drew, let me give you a quick rundown. Uncle Drew himself is played by Kyrie Irving, a former NBA Rookie of the Year, a five-time NBA All-Star player, an All Star MVP (Most Valuable Player) and a championship winner with the Cleveland Cavaliers. Irving leads the film very well and gives the film some honesty and heart.

Uncle Drew’s crew is made up of Preacher played by Chris Webber, a five-time NBA All-Star and a former NBA Rookie of the Year who spent a large part of his career at the Sacramento Kings. Webber delivers perhaps the funniest moments of Uncle Drew, especially in a scene where he is about to baptise a baby in a scene heavily inspired by Coming to America.

Nate Robinson plays Boots and was the NBA’s first three-time slam dunk champion and has represented many teams including the New York Knicks, Boston Celtics, Oklahoma City Thunder, Golden State Warriors, Chicago Bulls, and Denver Nuggets. Boots is a strong, silent character and also gives the film some heart as someone confined to a wheelchair who has seemingly lost the will to live. He is cared for my his granddaughter Maya (played by Erica Ash), an obvious but good love interest for Dax.

Next up is NBA legend Reggie Miller, a 5 time NBA All-Star winner who spent his entire career at the Indiana Pacers and gained a Summer Olympics gold medal in 1996. He plays Lights in Uncle Drew, the man who can’t see very well. He lines up alongside another legend and Summer Olympics gold medallist Shaquille O’Neal. ‘Shaq’ is one of the most recognisable basketball players of all time, holding 3 championships with the Los Angeles Lakers and one championship with Miami Heat. A 15x NBA All-Star and having numerous MVP honours, Shaq has also been a familiar face to film fans over the years having appeared in a lot of projects including Steel, Scary Movie 4, Blended, The LEGO Movie and Grown Ups 2. He shines in Uncle Drew as Big Fella, who has a long standing grudge to settle with Drew about a lost love.

Lil Rel Howery holds the entire film together as Dax, delivering a performance that will easily see him become one of Hollywood’s biggest comedy stars. Jess is played by the brilliant Tiffany Haddish and she’s a joy to watch. Frequently stealing her scenes, she is over the top in the best way possible and her exchanges with Dax and Mookie are good fun to watch. Nick Kroll can play a douche in his sleep and is very entertaining and there’s solid support from J.B. Smoove, Mike Epps and Lisa Leslie as Betty Lou, the Preacher’s wife who is in hot pursuit of her AWOL husband.

Uncle Drew is predictable but that doesn’t mean it’s not entertaining all the same. It won’t stay with you for very long after the credits role but there’s enough here to deliver a fun Friday night at the movies this summer. Uncle Drew is a film that plays to its strengths and with a solid cast, sees to it that you’ll leave the cinema with a smile on your face.