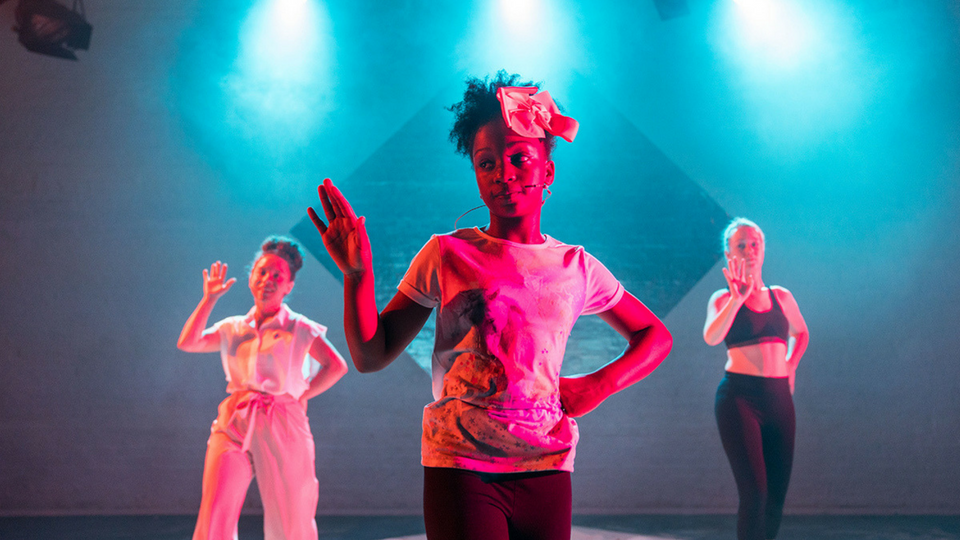 A new and better you

The media lectures us every day: WiFi is killing us, our posture is terrible, phones can give you ‘tech neck’ – yet we are cancelling out the future with our reluctance to think beyond our latest scrolling stint in the quest for instant gratification. It’s one thing to tell us exactly why technology is bad for us, but given that we are mere impressionable mortals (/sheep?), having the space to be receptive to an alternative way of life is a different matter.

What is fuelling the machine, turning us into robots, and can theatre take us away from our phones and make us seek the answer?

Joe Harbot has written a play that – against all odds – holds the attention span of a predominately twenty-something millennial audience, thanks to the team of creatives (a very instagrammable set by Bethany Wells) who present us with a multi-sensory landscape of neon lights, a sand-pit box, a jolting soundtrack and plenty of projected emojis.

The text is delivered in nuggets with repetition and reinforcement to the point of trolling. Imagine tweets, Instagram likes, corporate sound-bites, persuasive Powerpoint bullet points and Mail Online comments raining down like daggers disguised as sweets. We feel like we are submerged in a warped game of CandyCrush, yet sadly, the onslaught of sugary promises are fake news and result in bad life choices for our protagonist, leaving us all on the losing side.

The cast were exceptional. Hannah Traylen, our anti-heroine, is transformed from sand into a diamond – or so her gurus would have us believe, with her tragi-comic performance that keeps us on the treadmill with her on the path to self-improvement. She paces brilliantly, as if echoing more of the earth’s elements – in this case, a small spring of water that rushes into a fast-flowing stream of success. However, even the Simpsons ‘three-eyed fish’ wouldn’t last five minutes in this toxic ecosystem.

Saffron Coomber conveys a disturbing version of self, in an engaging, beautiful yet terrifying way, which clinically portrays how we are prepared to punish ourselves more than any external imposed system. We remove the humanity from ourselves. Coomber’s precision delivers blows with an energy that we cannot fail to be confronted by.

Alex Austin plays a haunting talent agent-type, conveying the master manipulators of capitalism who have managed to take salaries for commodifying self-worth. He is fully committed, funny and sinister in equal measure.

Some of the most poignant moments for reflection were provided by the young actor Ariana Williams, who took on the role of the life coach. We are reminded of the playfulness of our youth, with her delicate performance, that also underpinned the entire play’s foundations, stabilising our thoughts and what we are all set to lose, if not already lost.

You can’t help but think that the dawn and downfall of humankind is having its fate frozen in history in the Yard theatre, thanks to director Cheryl Gallacher’s magnitude of layered decisions. This is an ancient experience (and no, I don’t mean like the time Ed Miliband chiselled a manifesto into a giant tombstone). It’s a sparkling tale of civilisation being the author of its own misfortune, and we are watching from somewhere between an altar and the Glastonbury Pyramid Stage.

Gallacher merges iconography of the past (the pinnacle scene of our transformed Queen of Instagram’s advertising campaign staged in a desert is almost biblical), present (who doesn’t love doing mountain climbers on a Saturday night in a sand pit in search of the perfect beach bod?) and future (the released book and TED-style talk that tell the secret to our influencer’s success secures the ongoing legacy) with an ingrained respect for threads of humanity the show possesses. As a side note, the inclusion of line-dancing as a device serves to dramatically portray the ridiculousness of the entire advertising and PR industry in its quest to repackage our feelings back to us, while slapping on a price tag to benefit a client’s bottom line. Yee-hah!

In this article:A New and Better You, The Yard, theatre