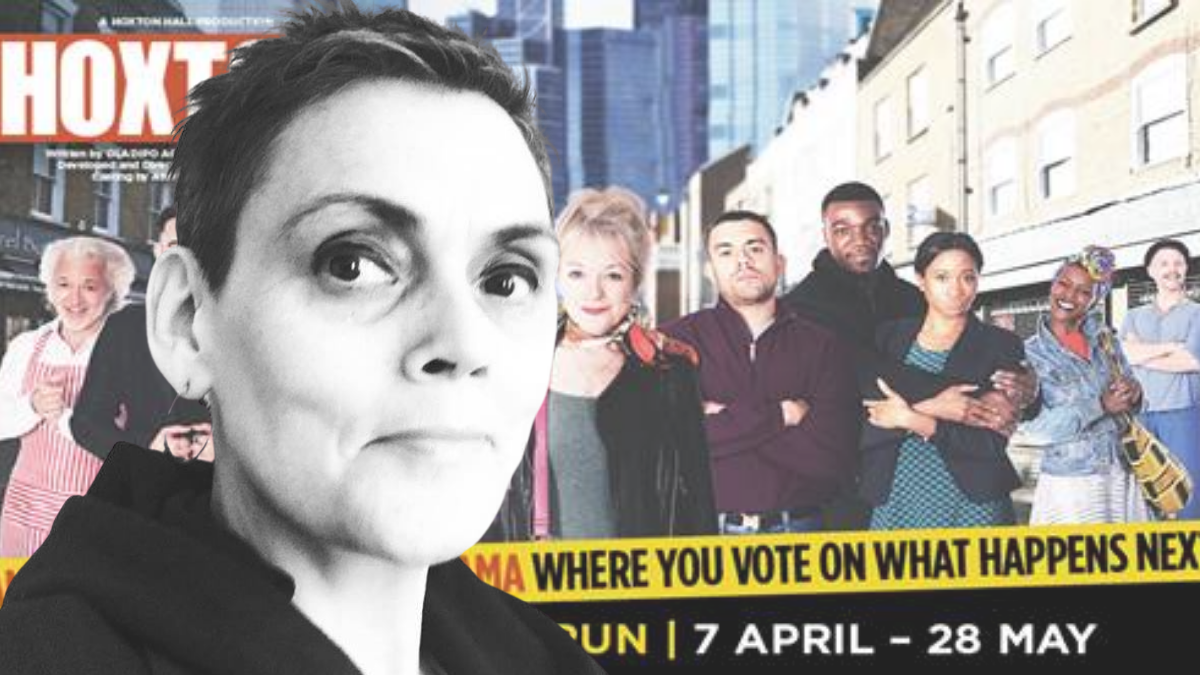 Lil Warren, co-writer of Hoxton Street a Hoxton Hall until 28 May

Hoxton Hall’s #CLASS season is a vibrant series of events and performances that question the meaning of ‘class’ in 21st century London.

At the heart of this season is Hoxton Street, a story of love, secrecy and desperation inspired by the unbelievable reality of local stories, running until 28 May 2022.

Based on the concept from Karena Johnson, talented working- class writing duo Oladipo Agboluaje and Lil Warren have captured the vibrancy of Hoxton by weaving neighbourhood anecdotes with the thrill of the beloved British soap opera. Each ‘episode’ invites the audience to steer the story by asking them to vote on what happens next in this gripping tale. Co-writer Lil Warren talks more about what’s in store and why it’s a theatre/soap hybrid that ‘Hoxtonites’ and beyond will enjoy this month.

Tell me about the inspiration for Hoxton Street

Karena Johnson has wanted to do a season about CLASS as long as I have known her and up until now just could not get funding or support. Then about a year ago I think, we started seeing a lot of funding and arts jobs targeted at the working class but quite small pockets of money. Karena conceived the idea to have a Theatre/Soap hybrid where the audience decide on where the storyline goes to anchor such a season. I live and work in the borough and Dipo used to live in Hackney so we knew the area well even though we were not from it . A lot of Hoxtonites liked it that I was from Bethnal Green. There has always been a friendly (ahem) rivalry between us. As writers myself and Dipo were inspired by the people who lived and worked in Hoxton Street. But writers are as writers do and there was quite a lot of earwigging in the cafes and Post Office too. We watched a lot of Classic Enders and Brookie and got really great help from the Soap writer Marc Pye, who worked on Eastenders, Hollyoaks and over 60 episodes of the Scottish soap River City. To quote him “Hats off to the creators of Hoxton Street, Creating Soaps is hard and a Theatre Soap will be twice as tricky. The cast will have to blend both acting styles and techniques. But what a brilliant concept” Also I have worked with the brilliant Hoxton Hall Youth Arts Team and some of their young people on projects. The team is led by Grace Hammond, who used to go to school with my daughter, so Hoxton Hall are like my family.  I know a lot of people in the area through Grace (who is from Hoxton) and Poppy Kay (who is also in Hoxton Street as Anne-Marie who works in the doctor’s).

What does your writing partnership bring to theatre?

Myself and Dipo did a lot of work on the pilot Episode during lockdown. We looked out for each other and we got real tight. We were pleased that on the first public Zoom reading of Hoxton Street no-one realised it was written by two people. We were both very chuffed with that. We have very different styles and my origin story is one of a stand up so I ALWAYS go for the laugh. Sometimes to Dipo and Karena’s annoyance I think.  Dipo is all about the story. He is a great dramaturg and I have learnt a lot from him.  A lot of the feedback from people we spoke to is that working class humour is often missing from Soaps. Or there is not enough of it. “We’re not thick!” was another one oft said. Anyone who has ever visited Liverpool or Glasgow will KNOW working class people are not stupid.

Why do you think soap operas are so popular and how can theatre embrace this?

I think we focus too much on the word soap and not enough on the word OPERA. Those big emotions, larger than life characters,  the intricate coincidences, someone is almost always born on the wrong side of the blanket. I think the form is done very well in this country. At one point the work on Coronation Street was at a genius level. Full of old variety performers who knew how to do it BIG but true. People connect with the characters. They know someone “just like them”. Seriously I was outside the venue on the double episode this week and people were already talking bout the characters back stories as if they were real people.

How important is it for the arts to highlight class disparities?

It’s not about us from the working class highlighting disparities necessarily. It is exhausting for any group who is exploited and or excluded to have to educate the ones keeping them down and keeping them out. I think we just need to learn to value working class arts (to name just one marginilised group that intersects with many others) For example  I got into a bit of a thing with someone about why are working class characters always smoking? Bit judgey. Bit loaded. But unless you have smoked to stave off hunger please don’t have a go.There is a bigger underlying picture.

What can audiences expect from the series and will it be streamed again online?

Hoxton Hall have responded to local feedback and are consolidating all the Episodes and opening the Omnibus for a 2 week run from 18 May. (They changing this on their website as we speak – I hope).  So now there will be a LIVE vote at the interval each Omnibus night. The actors will never know what the second half of each show will be. I hear they are all very excited by this. I can’t wait. When we are all voting there is a real feeling of tension in the air and a lot of banter between the two cliffhanger camps.

Who do you hope comes to see this show?

I want EVERYONE to come and see this show. Because it is so good. The actors are quality TV and Theatre actors. Like a Panto the gags and references land at different levels for different people. I know we love our box sets but this is a Soap but as an audience we are not passive. We get to laugh and talk and then make a lot of noise whilst voting. Carol Moses who plays a Dot Cotton type character, is just BRILLIANT at getting the audience going.  But like The Big Bang Theory us writers had to get the “science” details right as it is called Hoxton Street and we used local stories as our launch pad. Sometimes a show like this is accused of being parochial or “too local”. No-one seems to have a problem with watching TV shows set in New York. We all know the different boroughs now and why no-one wants to live in Queens. I don’t see why if we localise our drama it ceases to have value to a wider audience. And you get to have a CONVERSATION with your fellow audience members. Everyone is in such a good mood at this show. It is a Soap but not as you know it.

To find out more about the season, including ‘C-word’ debates and to book tickets for Hoxton Street, visit https://www.hoxtonhall.co.uk/event/class-season/ or contact the Box Office on 020 7684 0060. Catch the Hoxton Street’ omnibus on Saturday 21st May, 7.30pm and Saturday 28th May, 7.30pm (matinee 2pm)