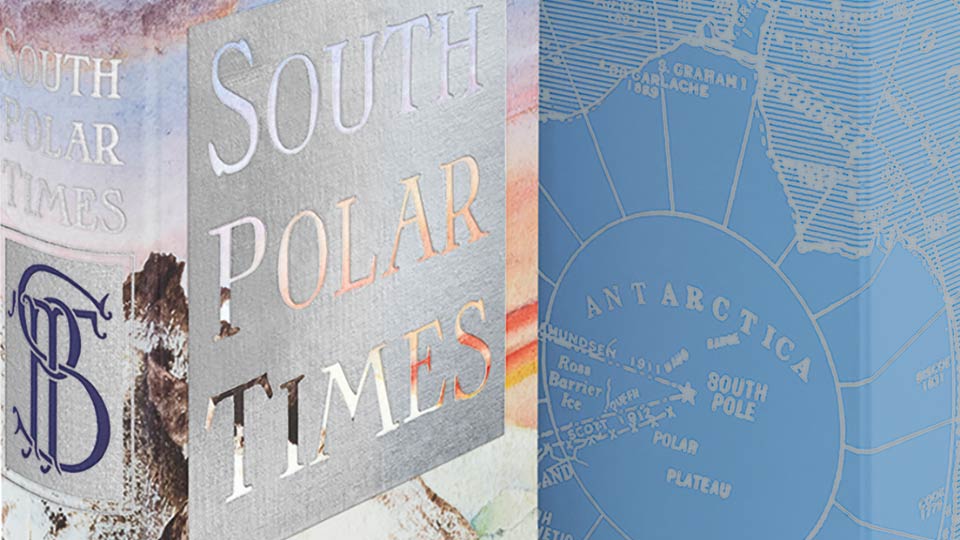 The Folio Society edition of the South Polar Times, written by the members of the Discovery and Terra Nova expeditions is available exclusively from www.foliosociety.com.

South Polar Times is written by the members of the Discovery and Terra Nova expeditions. It is produced by The Folio Society and bound in printed and blocked cloth, running to 688 pages with a 4-page fold-out map and introduction by Ann Savours.

It has been the stuff of Boys’ Own legend ever since. Captain Robert Scott led two expeditions to the Antarctic: first on the ship Discovery in 1901–4 and later with the Terra Nova in 1910–13. He and his men waited out the long months of winter darkness carrying out scientific research and then used the brief summers to explore the uncharted continent. To entertain themselves during those interminable winters, expedition members created a magazine – the South Polar Times. Typed up and illustrated with expedition members’ own text, paintings, sketches and photographs, each issue was read aloud to all hands.

The South Polar Times offers an insight into the daily conditions, tasks and amusements of the expedition that is more evocative than any history book or biography and provides an unsurpassed sense of the expedition community, which included personalities such as Scott, Shackleton, Wilson and Cherry-Garrard, as well as scientists and ordinary seamen – all inspired to travel to Antarctica and risk their lives. The magazines contain a mixture of the ‘grave and gay’; serious reports on the weather or fauna interspersed with cartoons, songs and articles that gently poke fun at team members.

Scott’s intention has been fully realised in this painstaking reproduction by The Folio Society of all twelve issues of the South Polar Times. The pages are facsimiles from the original journals reproduced to the same dimensions. An introduction by Polar publishing authority, Ann Savours, goes behind the scenes of the magazine, from editorial process to publication, and dwells on the poignancy of the final issue; created by team members fully aware that the absent Scott, Wilson and colleagues had certainly perished. The volume binding replicates a detail from Wilson’s exquisite watercolour from the 1902 South Polar Times cover.

In 2012, The Folio Society created a unique limited edition version of South Polar Times which presented the South Polar Times as 12 individual issues (as they would have been at original printing) in a solander box. This new edition brings all the issues together in one volume. They are reproduced full-size. There is no other publication of this unique collection.

In her introduction, Ann Savours says: “Leafing through the pages of the South Polar Times, in our imaginations we can ignore geography and time, transporting ourselves to join in the horseplay and humbug, the daily routine, the work and moments of creativity entirely cut off from the rest of humanity in the hut at Cape Evans, encompassed by that strange, silent, hostile and icebound world beneath the plume of Mount Erebus.”

In this article:Robert Scott, Scott of the Antarctic, South Polar Times, The Folio Society