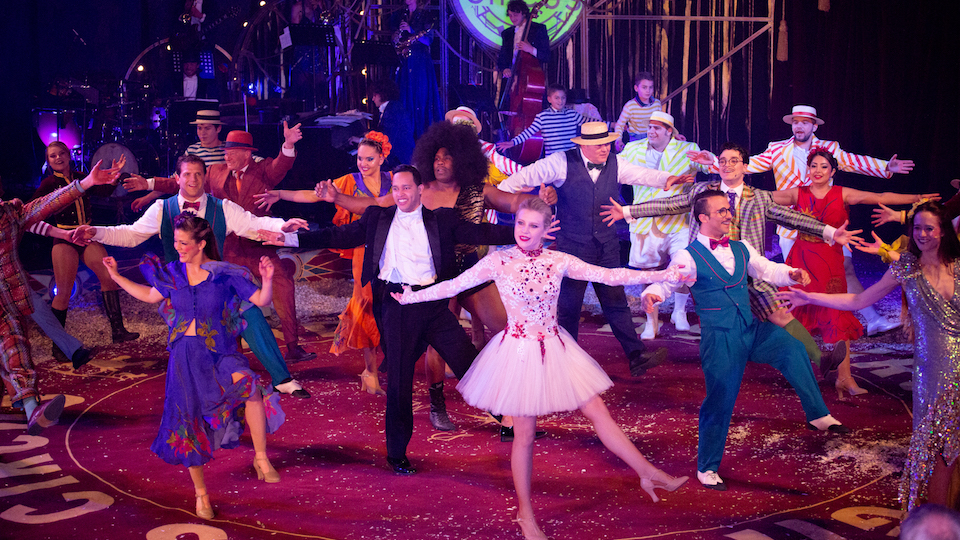 Did you know 2018 marks the 250th anniversary of the birth of circus? It was news to me, too! To celebrate, Giffords Circus are touring a new show this summer, ‘My Beautiful Circus’.

Arriving at Chiswick House and Gardens, you’ll find Giffords located inside the walled garden. A little tricky to find if unfamiliar with Chiswick but it is such an appropriate setting. It feels as if you’re happening upon a well-kept secret as you enter Giffords’ world. Decorated vintage wagons, welcoming helpers dressed in traditional red costume, tantalising food from Circus Sauce restaurant on site and stands selling pizza, lollipops and popcorn are all designed to tease the senses.

Taking adults back to childhood and, for kids, it’s a wonderful way to sample the magical circus experience perhaps for the first time. That’s a special memory (if you’ve not developed a clown phobia, of course). It must be 20 years since I last stepped inside a circus tent as a teen, which I recall was a ramshackle production abroad that proved to be little more than a bizarre parade of exotic animals. Thankfully, ‘My Beautiful Circus’ is far from it, and it’s clear to see that their animals are content, well trained and cared for.

Inside the impressive canvas lies an intimately sized ring, flanked by a live swing band. Dressed in glamorous 1930s clobber, the band whip up a rip-roaring atmosphere and build moments of tension as death-defying stunts are performed before our very eyes.

Giffords’ clowning acts were removed from a stereotypical image of OTT clown costumes, heavy make up and laboured gags. In fact, Tweedy The Clown proved to be a man of many talents as well as a likeable fool. Entertaining the crowd between the acts, his role built to a great little set piece with a touch of cheekiness thrown in alongside circus mistress, Nancy Trotter Landry, who unwittingly ends up showing her LAUNDRY to the crowd!

It must be noted, too, that both Nancy and her talking turkey had im-PECK-able comic timing! There’s a variety of crowd-pleasing animal acts. Personal favourite? Undoubtedly Diana Vediashkina and her adorable ‘dancing Dashshunds’.

What’s not to love? Capturing the circus spirit is what Nell Gifford and husband Toti intend to deliver to audiences, and they’ve nailed it. It’s a fine mix of quirky animal acts, impressive stunts, lively somersaults, aerial silk acrobatics, strongman, jugglers and clowning sprinkled with tongue-in-cheek British humour. Cramming together this combination over two hours is the real balancing act and Nell, Cal and the team have pulled it together beautifully. The all-singing-all-dancing finale was fun and, hearing the sound of kids squealing delightedly as they joined performers to strut in the ring, is more telling than any review. A uniquely memorable night of family entertainment.

Giffords Circus is touring the UK until September. For tickets and listing info visit: www.giffordscircus.com