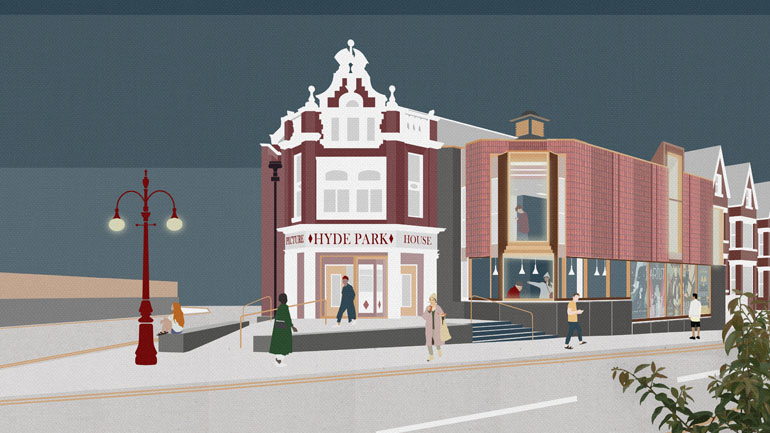 Hyde Park Picture House in Leeds has secured funding for an ambitious refurbishment project, which will preserve the much-loved community institution for generations to come.

The plans aim to conserve the rich heritage of the cinema’s Grade II listed building, including the restoration of the Picture House’s unique gas lighting and the elaborate plasterwork. The scheme also includes vast improvements to accessibility, upgrades to services throughout the building and the introduction of a new flexible second screen in the basement.

Led by the Picture House’s parent company, Leeds Grand Theatre and Opera House Ltd, the £3.6m project received £122k development funding from the Heritage Lottery fund in 2016 which has allowed the organisation to progress plans for a full National Lottery Grant application which is due to be reviewed later this year.

The Leader of Leeds City Council, Councillor Judith Blake, said: “The Picture House is a rare architectural gem in our city and it’s a pleasure to be able to support this bold and creative project which aims to not only secure the cinema for generations but also to contribute positively to making Leeds an accessible, compassionate and culturally bold city.”

There is an ongoing fundraising campaign to secure the remainder with essential contributions already confirmed from the Pilgrim Trust, the Gwyneth Forrester Trust and the British Film Institute, but the Picture House is still welcoming sponsors who want to help bring the project to fruition.

Building works are due to begin in Summer 2019. Throughout the construction period, the Picture House will be staging an exciting off-site programme of screenings and events around the city, allowing it to continue bringing the best of world and independent cinema to Leeds.

Find out more at thepicturehouseproject.com.