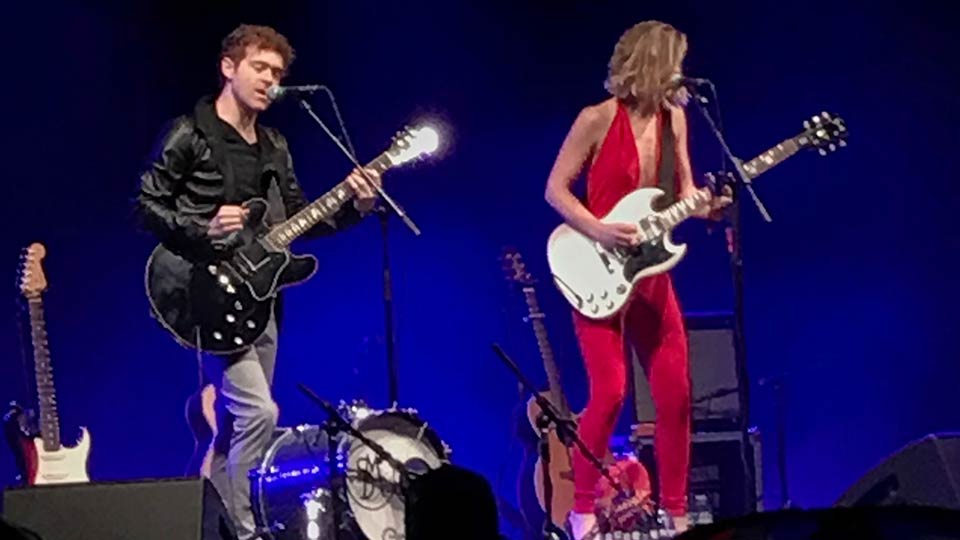 The first-ever Black Deer Festival kicked off yesterday at Eridge Park in Kent bringing Country, Americana and Folk acts from all over the world.

Easing us into what promises to be a fantastic weekend, Black Deer Festival’s first day was a fairly chilled affair as fans arrived at the site throughout the day. With a number of camping areas outside the main area, including the very swish-looking Fancy Camping, attendees spent the earlier part of the day pitching their tents and setting up their homes for the next three days.

A short walk from the car park, the arena opened at 2pm and it was our first chance to explore Eridge Park. Boasting several stages spread around the site, things kicked off just after 3pm with the exception of the Main Stage, which will be hosting acts on Saturday and Sunday. As soon as we arrived we got stuck in and caught up with some of the acts playing over the weekend including Striking Matches, Sonia Leigh and Catherine McGrath.

Once our chats were done (the full interviews will be coming next week), we took time to properly explore all of the stages on offer. First up we checked out Jay Scott & The Find, who were opening the stage at Haley’s Bar. The set was energetic with fantastic vocals from Scott and it ended in a sweet way when he invited his young daughter to the stage to perform a rendition of Elle King’s Ex’s & Oh’s.

Later in the day we caught Wallis Bird on the same stage and she gave a remarkably unique performance that got the crowd going. Her voice was absolutely incredible and she oozed charisma. Bird frequently had the crowd in stitches as she joked that she was Sinead O’Connor and introduced every song as ‘brilliant’. Highlights over the course of her performance included a storming rendition of Blossoms in the Street, a cover of Massive Attack’s Teardrop and an acapella version of Home, which the crowd joined in on. Bird essentially threw a massive party using her big personality, her incredible talent and an acoustic guitar attached to a loop pedal. She was magnificent.

During the day we caught rising Rotherham singer-songwriter Lauren Housley performing a slowed-down version of Dolly Parton’s Jolene on the Roadhouse stage and on the Supajam Stage Catherine McGrath, Striking Matches, Sonia Leigh and Sarah Darling joined forces for the Songwriter Session, which drew a large and enthusiastic crowd.

The biggest crowds flocked to The Ridge stage. Keywest opened the stage for the day followed by the Broken Witt Rebels, who we unfortunately didn’t get the chance to see. During The Wandering Hearts set we took a seat on the hay bales around the live camp fire and soaked in the music and atmosphere. The UK quartet’s set was well-received and they brought an injection of energy to the otherwise relaxed feeling of the day as they performed selections from their album Wild Silence including Devil and Wish I Could.

Catherine McGrath followed and put on an impressive show with her band. The singer-songwriter, who releases her album Talk of This Town next month, opened her set with Just In Case and entertained the crowd as she revealed the stories behind her songs. Current single Lost in the Middle went down really well as did her closing number Wild, which is definitely a fan favourite. She warmed up the crowd nicely for Sarah Darling, who was the penultimate act on the stage. Darling was the first US star to perform on The Ridge stage and her commitment to touring in the UK ensured she pulled a large crowd for the performance. Audiences were treated to selections from her most recent album Dream Country and her new single Diamonds.

Closing out The Ridge stage were Striking Matches. Their set was a mixture of new material and songs from their debut album Nothing But the Silence. The duo – Justin Davis and Sarah Zimmermann – were incredible as they showcased their remarkable guitar skills and played off one another through the set. Opening with Retrograde, Striking Matches lit up the stage and they really energised the crowd. At regular intervals, they taught the audience the words to their newer material so that we could sing along. One of the highlights was When the Right One Comes Along, a song that was used in the TV show Nashville, and a surprising cover of Rick Astley’s Never Gonna Give You Up. Striking Matches are following up their appearance at the festival with a headline UK tour and a new album is expected to arrive very soon.

The facilities at Black Deer are impressive. There is a wide variety of food vendors from mac ‘n’ cheese through to fried chicken and even paella. The prices were surprisingly affordable with most main dishes coming in under £10 and drinks the average London price. For a festival, I don’t think that’s too bad. Outside of the food and drink there were activities for families in the Young Folk area, opportunities to learn guitar and handle lassos, and an area run by Woodland Tribe where you can get hands on with a bit of woodwork and construction.

Today (Saturday) will likely give a much more rounded feel of the festival as the Main Stage will be active and more music lovers are expected to attend. Day 1 was for the most part a chilled-out affair with great music and a community atmosphere, which in our opinion was the perfect way to start a fun three days packed with music and much more.

For more information on Black Deer Festival and to pick up last-minute tickets for the weekend, visit https://blackdeerfestival.com/.