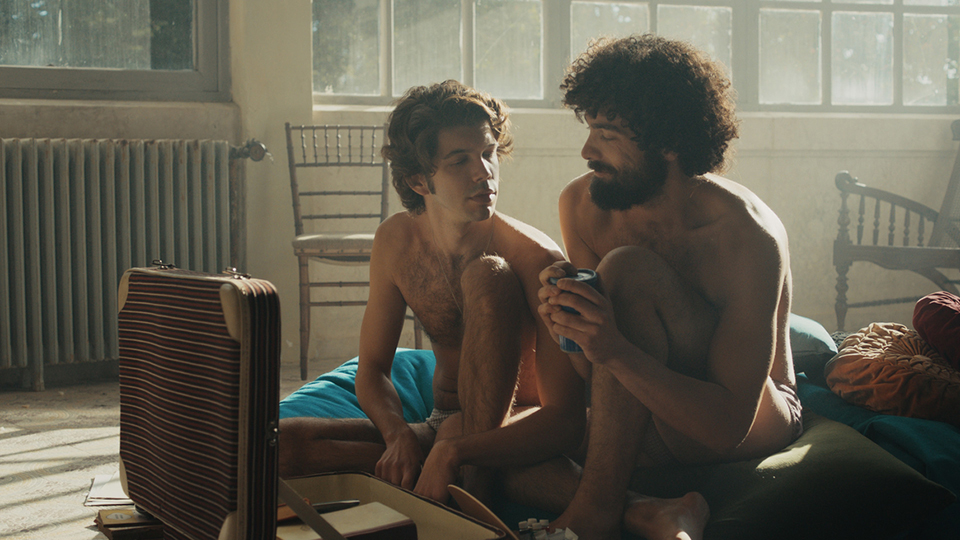 Poet Al Berto (Ricard Teixeira) returns to the small town of Sines in Portugal in 1975 after living in Brussels and training as a painter. He sets up camp in a dispossessed mansion that belonged to his family and he soon builds a community of like-minded young people, including João Maria (José Pimentão) with whom he becomes romantically involved. As the community grows, it starts to be recognised by the conservative locals who are anything but happy about the sexual and cultural revolution taking place.

Al Berto is based on a brief period of Portuguese poet Alberto Raposo Pidwell Tavarares’ life. Director Vicente Alves de Ó used journals from his half-brother, who was a lover of Al Berto’s, as the basis of the film so it’s a project that is deeply personal to him. Al Berto is depicted as a revolutionary who was ahead of his time and a free spirit who was open to whatever pleased him. He quickly enters into an intense and passionate relationship with João, regardless of how it makes his close friend Sara (Raquel Rocha Vieira), another member of the community who harbours feeling for him, feel.

What is captured really well here is the ‘anything goes’ attitude of the community during this time period. They encourage each other to express themselves, fall in and out of bed with whoever takes their fancy, and throw parties to celebrate art and freedom. That of course doesn’t sit well with the locals who aren’t used to seeing public displays of homosexuality or being around such free thinking. The tensions between Al Berto and the community rise as the film progresses.

At the heart of the film is the whirlwind and lust-filled romance between Al Berto and João. They meet when Al Berto sees João performing with a band and their relationship quickly develops. The two men fall for each other passionately and Teixeira and Pimentão form a rich chemistry. The intimate scenes between them are some of the film’s finest moments and you can almost feel the heat from your screen. Inevitably the relationship hits a few rocky patches and it poses some interesting questions about sexual freedom and its contradiction with monogamy.

Alves de Ó gets magnificent performances from his cast and he also has an eye for flair. Al Berto looks stunning, with every shot framed gorgeously. The settings and locations really bring the story to life as do the vibrant characters, and the colours they wear.

Al Berto is an engaging and enjoyable movie with strong performances from its two leads. The carefree spirit of Al Berto and his friends is infectious but the film also serves as a cautionary tale. While it’s important to live your truth and embrace an authentic life, you can’t always control the outside influences and pressures that come with it. Al Berto is painted here very much as an idealist rather than a realist, and by the end of the film that becomes his downfall.