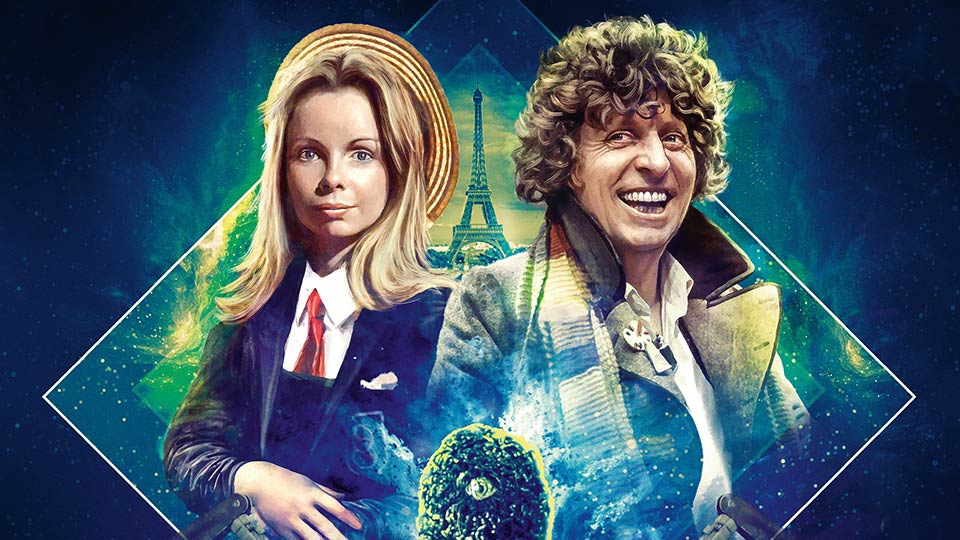 Paris, the Mona Lisa – and a malignant alien meddling with time! It can only be City of Death, the highlight of Season Seventeen, which now enjoys a release on vinyl. Accompanying The Tomb of the Cybermen, City of Death in gatefold double vinyl is an addition to Demon Music Group’s licenced Doctor Who releases. There’s a full twenty-five-minute episode on each side.

This one stars Tom Baker as the Fourth Doctor and Lalla Ward as Romana. A trip to Paris to see the Mona Lisa (no eyebrows) sees the Doctor unwittingly uncover a plot by the alien Scaroth, last of the Jagaroth, who is under the guise of Count Scarlioni, to loot works of fine art to sell and fund his experiments in time. He has the Mona Lisa in his sights. But with an ambitious plan to go back in time to prevent his spaceship from exploding, sparking the origins of life on earth billions of years ago, the stakes are high if the Doctor can’t find a way to thwart him.

City of Death is gloriously funny, light and clever. Although the writer is credited as ‘David Agnew’, that was a pseudonym for co-authorship, and this one has the fingerprints of the late Douglas Adams all over it. His high-concept, fast and comedic science-fiction ideas, soon afterwards given full flow in The Hitch-Hiker’s Guide to the Galaxy, are in full flow here. The dialogue is gorgeous, and springs to life on outstanding quality 180g vinyl. In order to make up for the absent visuals, narration by Lalla Ward, who played companion Romana in the serial, is provided to link scenes or explain action. She sounds the same now as she did in 1979, and other than pronouncing ‘Captain Tancredi’ differently to the actors, her contribution is seamless, if slightly humourless and therefore mildly at odds with the story’s tone.

There are sleeve notes by Cameron K McEwan. There’s striking cover artwork by Lee Binding. At album-size, all of the lovely details come through, such as the oil painting effect on the images, and Romana’s hands, which are held in a replica of the Mona Lisa’s famous pose – great work! It’s also a boon to those of us with a disposition towards the 63-89 series to see the classic logo – the Pertwee design was so good it was later re-used for the 1996 TV movie – rather than whichever drab effort the reboot is currently airing. Even now this iconic design stands up and stands out. The whole design feels right. Added to the excellent appearance are high production values that offer crystal-clear sound quality of the recordings.

The only aspects you really miss from the audio experience are the sumptuous Parisian locations, and the unmistakeable look of mutual love in Tom Baker and Lalla Ward’s eyes (it was not to last, but was captured for posterity in this story).

Enjoy Julian Glover’s performance as smooth villain Count Scarlioni – he’s menaced on screen in everything from The Avengers to James Bond, Star Wars and Indiana Jones. Catherine Schell (Space: 1999), a very beautiful woman (probably), is also a fine actor, and is delightful as the feckless socialite Countess. Loveable voice actor David Graham (Thunderbirds) gives a memorable supporting performance as Kerensky, the scientist forced to work for the count, whilst Tom Chadbon is a delight as the roguish undercover police officer who enjoys thumping people and smashing glass: Duggan turns out to be one of the Doctor’s best-loved aides.

We adored experiencing City of Death in a purely auditory way. Compared to the claustrophobia and suspense of The Tomb of the Cybermen, City of Death is much more frivolous, but this is a pleasing contrast. Perhaps because it’s a more visual story anyway, City of Death didn’t quite make our imagination soar in the way of Tomb, but there is an undeniable pleasure in perfect sound that delves into the Doctor Who world.

See also our review of The Tomb of the Cybermen, which has also been released in gatefold double-vinyl format by Demon Music Group.