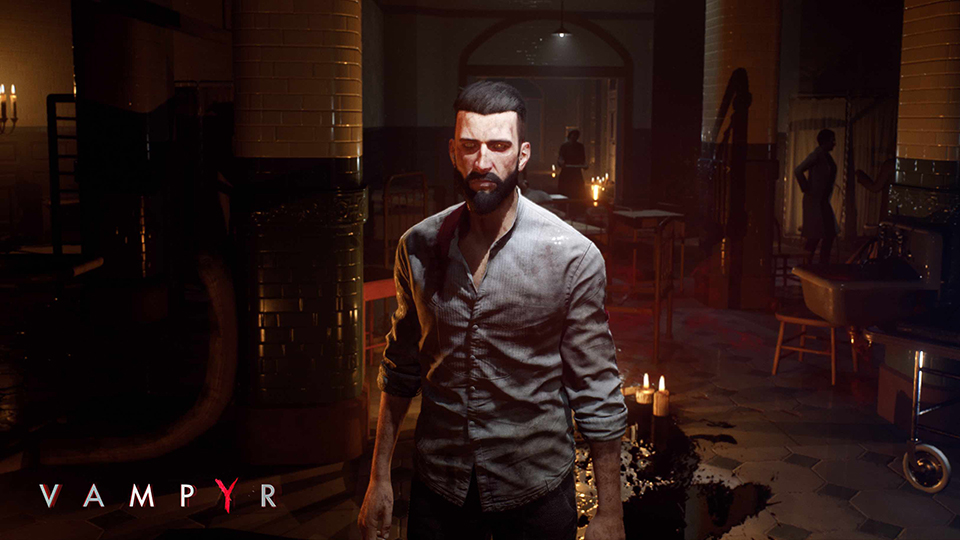 A long time in the making, Vampyr was originally due to arrive ahead of Christmas in 2017. Delays pushed the game back and it finally arrives this week on PS4, PC and Xbox One. With a lot of buzz surrounding it, Vampyr has a lot to live up to so has it been worth the wait? Taking on the role of Dr. Jonathan Reid, a man recently turned into a vampire, players are thrust into a world that feels part Sherlock Holmes and part Grand Theft Auto.

Vampyr takes a little while to get going. There’s more scene-setting than perhaps is necessary and the tutorials that populate the first half an hour or so interrupt the gameplay more than I would have liked. Set in a flu-ravaged London in 1918, the game starts with Reid unaware that he’s been turned into a vampire. As you stagger around the streets and into your sister, who quickly becomes your first victim, Reid starts to understand what he’s become but he isn’t entirely sure how it happened. That kickstarts his desire to find answers and research a cure for his condition.

Vampyr is built upon a series of missions that require you to complete tasks and get from point A to B unscathed. At times the game feels like a good old-fashioned point-and-click adventure as you interact with the characters around you, probing them for information. Despite being offered several paths of conversation, it doesn’t take away options or change the path of the game, which I would have expected it to. You can just cycle through every question at your disposable with no consequence. What’s particularly interesting here is that by talking to characters, you start collecting useful and personal information to help you make some difficult decisions later down the line.

What are those difficult decisions I hear you ask? Who you should and shouldn’t kill! The world of Vampyr allows any character you meet to become a potential food source/victim and by killing or turning them, you change the narrative of the game. Pick someone too popular with the locals and your life will get harder. Pick someone no one cares about and you’ll likely get away with satisfying your bloodlust. Where it becomes difficult is weighing up whether to kill certain characters in order to increase your power and abilities, even though it’s likely going to cause you some trouble.

The other side of Vampyr is pure RPG. As you wander the deserted streets you need to be wary of the other vampires, of which there are four types, that are ready to attack you without a great deal of warning. Tackling Skals, which are the most common type of vampire to find, is pretty straightforward. You can stun them using the stake you begin the game with and drink their blood to increase your own powers, or you can take whatever other weapon you have at your disposal and hack them to bits.

Frequently throughout the game you find yourself coming up against more ‘boss’ like creatures and the experience is pretty tense. You have to allow Reid’s stamina to replenish after you’ve launched several attacks. This means you have to run around whatever room or space you’re trapped in and dodge the enemy for a while. It took me a little while to get used to but once I did, it really became quite a skilful way to overcome enemies.

Another element to Vampyr is collecting supplies to make various potions, whether for yourself or other characters. This takes place at the workbench in your room and you have to keep an eye on your inventory so you don’t use everything, leaving yourself short when you need to create something to progress in the game.

Like Grand Theft Auto, there are hideouts all over the landscape that you can enter get some much-needed rest. As Reid can’t go out in the day, you can spend the daytime sleeping and while he’s doing that trade in your XP points to up your skills. It’s important to be selective about what you use your XP points on and strategically think about what’s going to come in useful. The ability to heal should be your first focus as you’ll find yourself needing that during battle, which is when the majority of these ‘power-ups’ come into play.

Throughout Vampyr you can access a map to see where you are and locate the markers denoting where you need to get to. You can read profiles of the characters you’ve met along the way and understand how much worth they are to you if you choose to drink their blood. The locations are littered with pages and letters to collect, and you can take a look at these too to get more background and feel a little more depth to the storytelling.

Visually Vampyr is a pretty appealing game. It depicts a convincing and grim version of London in 1918. The environments are incredibly detailed and there are lots of items to discover and pick up as you work your way through the game. Graphically it’s a little rough around the edges, especially when you compare it to the recently released Detroit: Become Human, which is simply stunning. The voice acting is solid enough though and the game does a fantastic job of creeping you out.

Vampyr is an addictive game but it does feel a little muddled as to what kind of game it wants to be. All of the individual elements work but together it doesn’t feel quite as cohesive as it should. If you’re a fan of endless action then you’ll find the investigation elements of Vampyr slow you down too much but if you prefer the investigation elements, the action can become repetitive pretty quickly. It’s a solid and meaty game but it doesn’t quite give the payoff I hoped it would.

Vampyr was reviewed using a digital code supplied by the publisher.