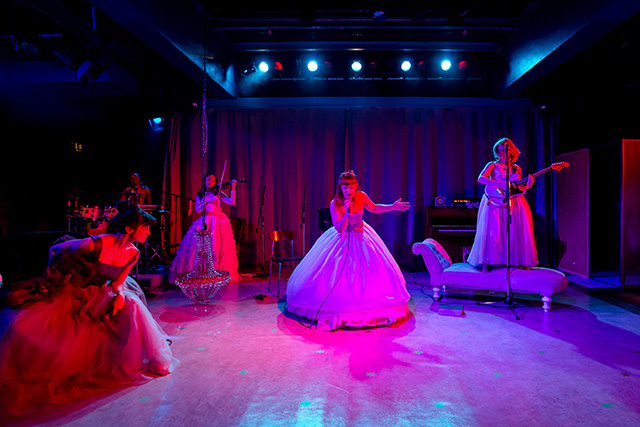 I first saw RashDash at the Soho Theatre, where Abbi and Helen performed as a duo, with a lot of liberation, and their work was full of originality. They now come as a three piece, with the addition of Becky Wilkie, who joined them last year after performing in several shows together. This time, the team bring their art to the artists lure of The Yard Theatre. The Yard Theatre formed in 2011 where a group of volunteers used recycled material to convert an abandoned East London Warehouse in to a space where artists can tell their stories, its in such a perfect setting, with brilliant and colourful graffiti art over every wall on the walk there from the tube, making it all round a very arty experience, based in Hackney.

Three Sisters by RashDash After Chekhov is a modern, punky, current and twisted take on Chekhovs famous Three Sisters play. RashDash have taken the play and turned it upside down on its head. The shows set is an amalgamation of a London flat circa 2018 meets a rural home circa 1900. The piano, chez lounge and bath tub all made up the living room. Add a cool shaven-haired female drummer and a cool female, violinist who both bring an enormous amount of coolness to the proceedings, and you have the coolest backdrop for their punchy work.

RashDash ponder, play, perform, sing and dance, with a bucket load of sass and confidence. Their fondness for being topless is almost seen as second nature to them now. They seem to enjoy being liberated feminists and getting naked. Its almost like they’re sticking two fingers up to society rules, whilst being part demure and part punk rocker. Abbi and Helen performed several brilliantly written and funny songs, pouring their hearts out and unveiling their inner rock chick talent. This was the first time that I’d heard them both sing, and they both have a pretty awesome set of lungs, with oodles of raw energy. Bouncing around the stage, head banging and running, skipping and singing across the stage, they bring childlike freedom to the show and could easily form a very talented band should they ever feel like breaking out in to another direction.

Becky brings a lot of comedy and talent to the team, making them even stronger than before. She pulled several really hilarious expressions even when the focus was on the other two, constantly adding value even when it wasn’t her turn to be the main focus – very much like Bubbles in Absolutely Fabulous. She is a great addition to RashDash and blends in effortless with them.

They three of them ponder being single in the modern world and swiping for dates online, whilst sat in their grand dresses and draping over a chez lounge, or perched on the edge of their chairs. They question the classics and why they get performed so often. Are they relevant to todays society? Are we always going to have them, or do they need to be brought to the modern era? They talk about creativity. They question the meaning of love, and the chats that women have when they’re together, their dreams and trying to make sense of the world that they live in. Theres so much going on in the show, that its hard to keep up. It can only be described as a visual, art experience draped in comedy, interaction and sass.

It’s definitely a very visual show, and they have put a lot of effort in to the stage design and costumes. This really brings the show to life and adds a lot of value to their show. I am so impressed as to how RashDash continue to grow and develop their work. They were fearless when I saw them a few years ago, and their fearlessness is now growing on another level. I am a big fan of these ladies and love their original, unique and truthful takes on topics.