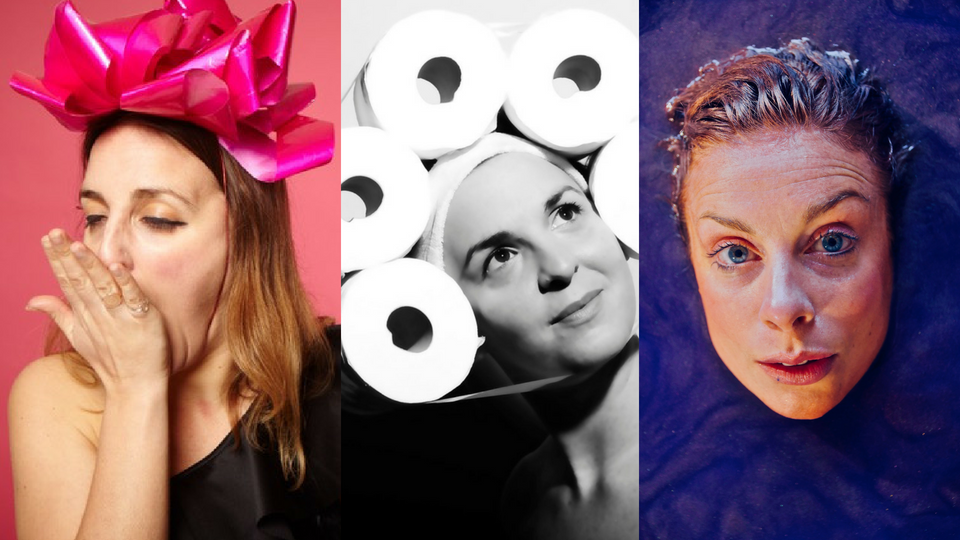 Now in its third year, London Clown Festival is a gem in London’s comedy calendar, inviting audiences to get in touch with their childlike playfulness and resurrect their joyful side (probably long forgotten and buried between navigating the urban metropolis, spending the bulk of time working, eating, sleeping or stuck on a Southern Rail train – multiplied by Brexit and GDPR emails).

So. Who to watch? Never fear, recommendations are here. Lucy Pearman accelerated clowning comedy into the national spotlight in 2017 like a rocket-propelled space hopper on a freshly tarmacked runway with an Edinburgh Fringe ‘Best Newcomer’ nomination and is returning to London Clown Festival with a brand-new work-in-progress. Kat Bond’s comedy award winning show ‘Loo Roll at last year’s Vault Festival had a brilliant run at Pleasance in Edinburgh and Amused Moose New Comic Finalist 2017 Helen Duff showcases this year’s Edinburgh Show ‘How Deep is Your Duff’.

I caught up with the comics reshaping the comedy narrative with fearless, uninhibited fun, who’re determined to bring us along for the ride.

What excites you the most about performing at London Clown Festival?

Kat: I love the acts they book. Experimental, playful and funny and it’s perfect time of year to see people working on their gems. Big fan of May and June in general to be honest. It’s a chance for me to stay local too – Mirth, Maud and Marvel is 10 mins from my house in Walthamstow. It’s a thrill.

Helen: The level of invention and connection in each performer’s work – they’re making something unique in the moment and it reaches out to audiences of all shapes and sorts.

How do you use clowning in your performance?

Lucy: Maybe its the fact that i’m very very under prepared so i dont really know whats going to happen.

Kat: I do lots of looking and listening to the room (p.s it’s not me with my ear to a floorboard for an hour).

Helen: I use clowning to play games with my audience that I’d never be allowed to instigate in the local library and ask questions Google doesn’t have the depth of character to comprehend.

Tell us about your show?

Lucy: It’s about a worm that has misunderstood itself.

Kat: It’s me being a therapist for an hour (the job I’m too lazy to retrain to be). We have several therapy sessions during the show most of them huge failures and then I roll around on a parachute. I’m exploring my overwhelming emotions the good and the bad ones. It’s ridiculous but I’ve performed it at Vault, Mach and Leicester festivals and it’s been so fun.

Helen: I’m doing two this year – my brand new solo show, How Deep Is Your Duff? – a climax of a kind, weaving together strands from my past two shows, Vanity Bites Back and Come With Me, to explore how simple pleasures make life worth living and celebrate the gloriously diverse stories in which love is the central thread. In addition, I’m organising and hosting the Clowns Without Borders Cabaret, to raise funds for an organisation that protects the fundamental rights of children to laugh and play regardless of their circumstances, and celebrates the resilience of the human spirit in the most horrific contexts. I’m going to play some of the firm favourites from my tour with Clowns Without Borders to the Rohingya refugee camps in Bangladesh – songs and games that people from all ages and backgrounds can’t help but have fun with. A night with three Edinburgh comedy award nominees, a host of fantastic clowns, raising funds for a brilliant cause – what more could you ask for?!

What do audiences love about clowning?

Lucy: It’s fun to watch because its interactive but only if you don’t get picked on, it can be scary when you get picked on but also I’mu feel proud and happy if your friend is picked on. I’ve said picked on three times, im afraid, now it’s four.

Kat: That you watch someone fail and keep going.

Helen: It’s a real antidote to frenetic, feed the algorithm, FOMO culture. With clowning you take your time to connect with whatever audience has turned up that day; you adapt your material to fit; you find the fun together and make something unique. It’s laughter as life affirming release.

How do you devise your work and where do you take inspiration?

Lucy: I’m not sure really, I try and make something that I think I would like to go and see. I look at the internet a lot – there’s all sorts on there now.

Kat: I take inspiration from idiotic things that happen to me, from my mates, snippets of conversation and I daydream.

Helen: I get inspiration all over – I’m currently reading an amazing selections of essays called “Women, sex, and the political power of pleasure” which details the efforts of NGOs to encourage a more sex positive dialogue when working in conflict zones or cultures that traditionally restrict and repress female freedoms. Once I’ve filled my mind up with ideas and information, I try to find a way of communicating it to audiences that makes us all laugh and employs my body as much as possible. There are some very complex contortions happening in the current show How Deep Is Your Duff, in the name of making life a more pleasurable experience for all.

What’s the weirdest thing someone has said about your performance?

Kat: That I had lovely teeth. My dentists disagrees but I like to split a room.

Helen: HA! Too many things to mention. After a preview of my last show, Come With Me, to a packed audience at the Boat Shed Theatre, Exeter, an audience member came up to point out the inconsistencies of my on stage “character” (I was performing as myself in the show). He thought it was great, and she was bubbly and charismatic with an infectious energy you couldn’t help but be carried along with. But that was also where his problem lay. He asked me – I think rhetorically – “how can you expect us to believe that this person, so happy in her skin, can’t have an orgasm? Surely that’s a contradiction we can’t be expected to swallow?”. It was a huge testament to the consistency of my “character” that I replied “perhaps you should consider what your problem with her reflects about you?” And left it at that.

Do you think clowning has the potential to become mainstream and should it?

Lucy: I think it probably already is mainstream, i saw someone fall over only just this morning.

Kat: I think clowning is everywhere so it’s as mainstream as you get. I saw someone try to get in there house with an apple yesterday. That was clowning or was that a dream?

Helen: think it already has! Look at Spencer Jones smashing it on Live at the Apollo and now with his BBC Shorts; Lucy Pearman (performing at the CWB cabaret) being nominated for Best Newcomer at Edinburgh last year with her brilliantly bonkers interactive debut; Ben Target (another CWB star) launching a project to take clowning into Care Homes across the UK, with a crew of acclaimed comedians including Kat Bond and Adam Riches, celebrated in the Guardian, and with sights set on changing the way we think about dementia care in this country in a major way. It’s such a hopeful time.

Why is the London Clown Festival platform important in recognising clowning and how can it be made more accessible to wider audiences?

Lucy: I think anything that encourages people to make something is good. Its always hard selling tickets but maybe lots more publicity would help. I’m not really an expert on selling tickets though which is a shame.

Kat: I think Dan and Amee are legends at organising a really rich, diverse festival at reasonable ticket prices. It’s a great platform for performance in general and I go every year.

Helen: Last year LCF took over the beautiful Hornsey Town Hall in Crouch End, this year it’s resident to Mirth, Marvel and Maud in Walthamstow as well as the Albany in Great Portland St and Farrs in Dalston. The size and scale of the Festival increases every year as people realise that clowning is exactly what they’ve been missing when it comes to interactive, inventive, inspirational comedy and start seeking it out with ever more hungry intent!

Do you prefer working solo or collaboratively?

Lucy: Does it count as collaborative or solo if you work with a dog in the room?

Kat: I like collaboration and even when I do a solo show I have lots of collaborators, chums and shoulders to cry and laugh on.

Helen: Such a tricky question because I really delight in both. Performing in Bangladesh for 3+ weeks with Clowns Without Borders was a wonderful experience of collaborative clowning in action – our team were 50% Swedish and UK clowns from very different backgrounds and we made it work so well because the central premise was always – what will bring most joy to these children who so desperately need to be allowed to laugh? I’ve tried to approach my new solo the same way, and decided that asking the audience questions and integrating their suggestions into the show is the best way to keep that conversation alive every time I perform. Which is lucky – as I’m taking it up to Edinburgh next, so I’ll need to keep it fresh for the next 40 odd shows at least!

Kat Bond, Emotion in Progress is at London Clown Festival on 29th May at 7pm (60 mins). Follow Kat on Twitter @KathrynBond

Helen Duff’s Clowns Without Borders Cabaret with Kat Bond, Lucy Pearman, Richard Todd, Ben Target, Cassie Atkinson and Matt Hutson is on 1st June at 10pm and her solo show How Deep is Your Duff is on 2nd June at 7:30pm (60 mins). Follow Helen on Twitter @DuffMarvel

For all tickets visit https://www.ticketsource.co.uk/londonclownfestival