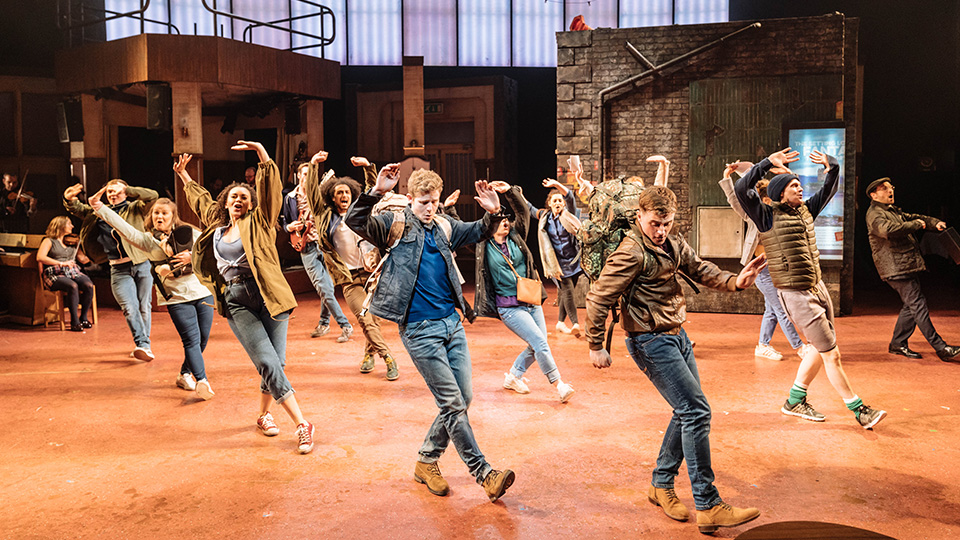 A new production of Sunshine on Leith, the musical inspired by the hits of The Proclaimers, opens at West Yorkshire Playhouse this month ahead of a national tour.

We follow Davy and Ally on their return home to Edinburgh following service in Afghanistan. As the young soldiers attempt to pick up their lives, they quickly discover that time has moved on for their friends and family. Perhaps they’ve undergone a change within themselves too…

Stephen Greenhorn’s book is a love letter to Scotland and is fundamentally a story about family and community. Punctuated with no less than 18 songs performed with authentic Scottish accents, Greenhorn successfully knits together The Proclaimers’ catalogue of friendly folk hits with a kitchen sink drama, exploring the everyday complexities and challenges of modern relationships.

Whilst the plot could fit on the back of a beermat, the script brims with sharp dialogue and acerbic wit, combining pathos and comedy between a rapid succession of uplifting and ambitiously choreographed folk numbers.

James Brining’s direction displays his usual mastery of the Playhouse’s vast Quarry stage – an often uncompromising space of imposing scale. Innovative staging and sophisticated lighting design secures a dramatic intimacy, supported by immersive scene transitions with photo-realistic production design from Colin Richmond. An impressive use of height with multiple levels also fills every inch of the performance space, furnishing the story with a cinematic quality on stage.

Toby Higgins’ musical direction takes the salty, Celtic rock of The Proclaimers and expands their hits with a full-blooded musical arrangement, underpinned with vibrant acoustic guitars and a powerful ensemble chorus. Opening with the instantly catchy I’m On My Way and showcasing hits such as Letter from America, lesser known tracks also swell the ranks with equal triumph, climaxing with a rapturous version of I’m Gonna Be (500 Miles).

An outstanding ensemble cast deserves a more detailed mention, but in brief appraisal; Steve Miller and Paul-James Corrigan play Davy and Ally with cheeky charm and vocals suitably honouring the accented style of The Proclaimers. Hilary Maclean and Phil McKee deliver a lived-in chemistry to Jean and Rab, particularly throughout their tender moments of conflict. Tyler Collins is notably effective as a strolling guitarist, effortlessly transitioning dramatic scenes into musical numbers.

The detail invested in this production is exceptional; from beermats to city centre posters and even a lonely traffic cone abandoned on a pub roof. There’s a lived-in, authentic feel to the experience, offering a vivid sense of place. Anyone who has passed through Edinburgh Waverley rail station will instantly recognise some of the visual signposting invested in this show’s exceptional production design. A real triumph of modern stagecraft.

Sunshine on Leith is a straight-talking, feel-good folk rock musical bursting with spectacle and song. Full of optimism, charm and plenty of cutting Edinburgh wit, this irresistibly uplifting show is the perfect way to kick off your summer season whilst rediscovering the brilliance of Edinburgh’s most celebrated Celtic rock duo.