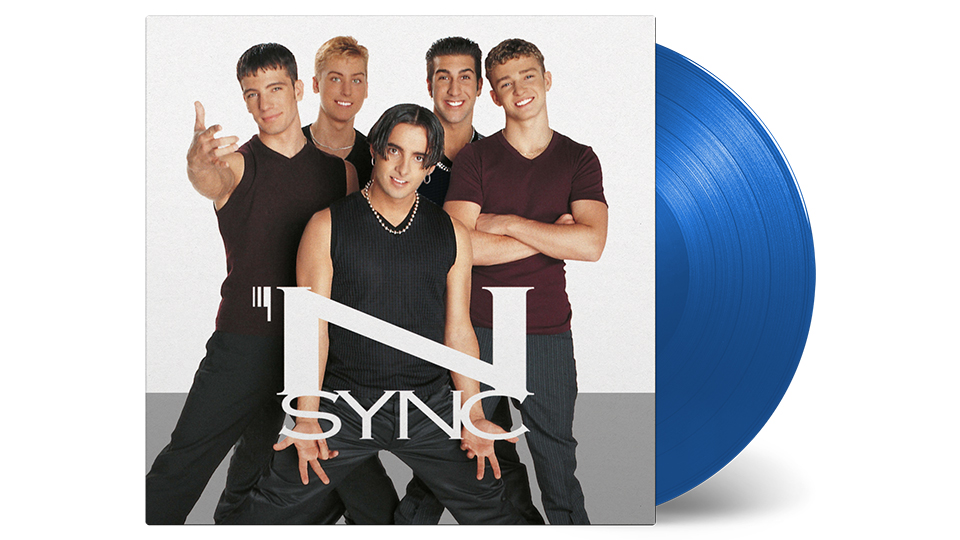 ‘N Sync made quite the mark on pop music during their 7 years of making music. Forming in 1995, the five-piece – Justin Timberlake, JC Chasez, Chris Kirkpatrick, Joey Fatone and Lance Bass – enjoyed a breakthrough in Europe almost a year before they made any impact in the US. Arriving in the industry a little after Backstreet Boys, who were seen as their main rivals, ‘N Sync had a slow rise to fame but once they finally broke through they smash records left, right and centre. This year marks the 21st anniversary of the pop group’s debut album (well the original version that is) and it’s being marked with a release on vinyl.

This isn’t just any old vinyl release though. Labelled as the 20th anniversary edition, ‘N Sync is a collector’s edition blue vinyl of which there are only 2,000 in the world. Rather than opting for the US re-release of the album, Music on Vinyl have put out the original European version of the album and dare I say it’s a real treat. It boasts the original track listing meaning there will be some songs on here that fans haven’t heard before as well as the original versions of their countless hits. Many ‘N Sync fans will have the US re-release, which featured remixed tracks, omitted some tracks from the original release and added some new ones.

This 20th anniversary edition is actually pretty special. There’s something quite thrilling about seeing the album with its original art work spread across the canvas of the vinyl sleeve. It comes with a full-colour booklet featuring all the lyrics and photos from the era along with a poster. Cheesy the poster may be but there’s a little bit of me that squealed as I opened it up and saw the fresh-faced fivesome pointing outwards with their names printed on each of them. The blue vinyl is eye-catching and I love that each side has a label featuring a different picture of the group. The attention that’s been put into this release is quite magnificent.

In terms of the music ‘N Sync is actually a much better pop album than I remember it being and it’s aged, for the most part, pretty well. The album kicks off with the full-length version of Tearin’ Up My Heart, an early track for iconic songwriter Max Martin, and it transports you back to the 90s. The majority of the album is uptempo in a similar vein to that track but what always set ‘N Sync apart from their contemporaries was their stellar harmonies, which form the centre of every song.

An interesting cover of Boston’s More Than a Feeling showcases the band’s voices brilliantly but it’s not the best song on here by any means. Dance tracks such as You Got It, Giddy Up and Here We Go highlight the pop/R&B fusion that the band explored further on their second and third albums. A cover of Christopher Cross’ Sailing enables you to hear the group’s voices free from the thumping beat and it’s actually a very strong version of the song.

Highlights include the hit single I Want You Back, the very 90s Boyz II Men style ballad Best of My Life and the moody midtempo For the Girl Who Has Everything.

One thing to note is that this isn’t 180 gram vinyl but actually the sound quality is really solid. Once could argue that you don’t need to hear the depth of pop in the way you do with most genres but I was impressed by the quality of this pressing.

This vinyl release from Music on Vinyl is everything an ‘N Sync fan could want and more. True pop music is too often ignored when it comes to vinyl so I’m delighted to see this classic album arrive on the format. It would have been an obvious choice to put out No Strings Attached, the group’s record-breaking 2000 album, but I’m glad it’s their debut that has been show some love. ‘N Sync is an absolute must-have and it’s a beauty of a collector’s item.

In this article:'N Sync, NSYNC