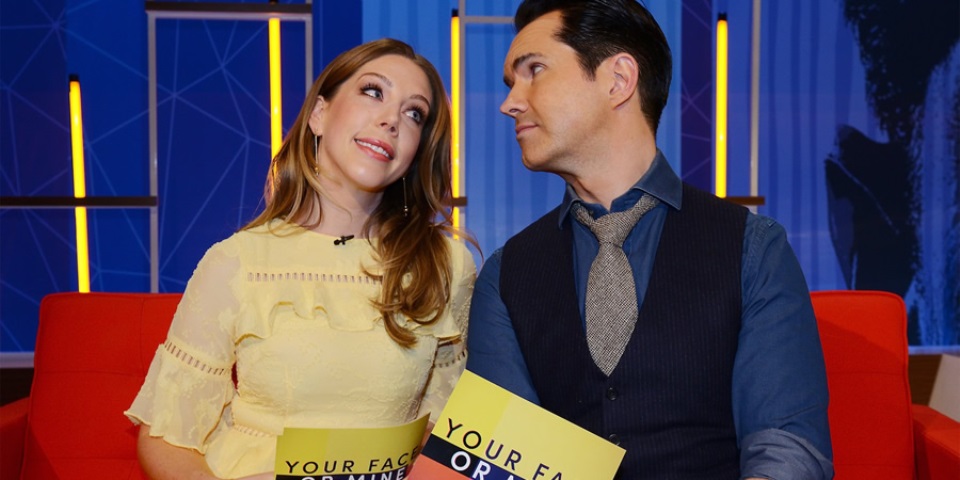 Katherine Ryan and Jimmy Carr. Your Face Or Mine - Credit: Comedy Central

Katherine Ryan and co-host Jimmy Carr are back hosting the third series Your Face Or Mine on Comedy Central UK.

If you haven’t seen the re-vamped noughties show couples are forced to compare their looks with other people’s – and ultimately with each other’s – in this relationship-testing game.

The show gets couples to compare their looks with celebs, strangers, siblings, friends, ex’s and each other to be in with a chance to win cash prizes.

I caught up with Canadian co-host Katherine Ryan to chat about being single, why she’s settled in the UK and working alongside Jimmy Carr’s whitened teeth without the aid of sunglasses…

Your Face Or Mine has received some criticism for its arguably cruel premise. What do you say to that?

I think it’s great to have criticism. I never mind if reviews are positive or negative – getting a response is desired. I think critics who say that haven’t watched it properly. If you watch the show you’ll see that we have lots of different couples, they’ve consented to play the game, and we get to know them. It’s wrong to judge people based solely on looks, of course it is, but it’s actually interesting that the audience vote often changes when personalities come out. We interview the couples and the perceptions and opinions often flip once one of the contestants – usually a male – opens their mouth. It’s a fascinating social experiment.

I love Jimmy. My first TV appearance in 2012 was on 8 Out Of 10 Cats and he’s been an instrumental support in my career. He’s very kind to other acts and offers encouragement which you don’t see on camera.

Who would you say is more attractive, you or Jimmy?

Well it’s hard to say as we’re organic – at this point baby pictures would be needed to decipher our original features. It’s no secret that Jimmy’s had his teeth whitened and I’ve had botox, fillers…in fact I’m not super sure I can be buried at sea.

Your Face Or Mine Credit: Comedy Central

Do you think women are still under more pressure than men to look good?

I see lots of dapper male stand ups. I get particularly glam before I go on stage. It’s my choice. That’s the Joan Rivers in me! I think if you’re invited into someone’s living room or if they’ve paid money to see you that it’s important you look your best. I am booked based on my perspectives and ideas but how you present yourself is also important.

Joan Rivers certainly always made an effort with her looks, is she your biggest comedy influence?

Joan Rivers is my idol. In fact, her and Jimmy Carr love the ‘roast’ comedy element. Only really, really nice people can do spiky comedy like that and get away with it. Joan Rivers was caustic on stage but really supportive of other comics. Above all she’d poke fun at herself.

What’s coming up for you after this series is finished?

I’m on tour at the minute and I’m hoping to hear a confirmation on a second Netflix special soon. You’re never guaranteed the next gig before it happens, when you’re freelance it’s a waiting game. There’ll be another series of Your Face Or Mine, though.

Do you find now you’re a TV regular that you’re noticed on the street or can you go about your daily life without being accosted by fans?

I’m never accosted! You can court attention if you want it. I’m sure if I put on my full stage make up and did my hair and hung around Oxford Circus I’d get recognised. As it is, I don’t go all out in the day. In fact, I look like a small ginger school boy in my village – no-one recognises me.

You sound very settled, do you plan to remain in the UK?

The UK is special in that it nurtures home grown comedy talent. Comedy clubs are full in the UK every night of the week. You just don’t get that in Canada, there isn’t the same hunger for comedy every weeknight. I feel like I’ve developed as a British comic. My daughter, Violet, is also used to the UK. She’ll be turning 9 in June and it’s an amazing place to be educated. My school was like a meth lab without the science. I’m glad to be settled here. I’m actually an Irish citizen, as my Dad’s Irish, he was from Cork.

Was it comedy that brought you over from Canada?

I actually came over for a boy. That didn’t work out. I’m currently single and happily not looking. I’m far too young to make that kind of choice. You don’t need to be in a hurry. I see older women who are vivacious, incredibly sexual beings. We should use our time to grow and to travel – no-one should settle down until their late fifties at the earliest. I wasted several years of my twenties on relationships, that was my bad. Violet is not a baby any more, why would I want to spend one free night a week getting ready to go on a date with some stranger? I want to spend my evenings hanging out with Violet and my dogs.

What would be your advice to any budding female comics out there?

The comedy community is different to any other. You just have to be proactive. Find out where the open mics are, do 3 minutes of material and learn what works. Be prepared to struggle and fail for a really long time. If you love it, it’s worth it. People are way more welcoming than you’d think.

Tune in every Wednesday night at 8pm on Comedy Central for Your Face Or Mine. Tonight sees a celebrity edition with Strictly Come Dancing’s James and Ola Jordan playing along with Jimmy and Katherine to win cash for charity.