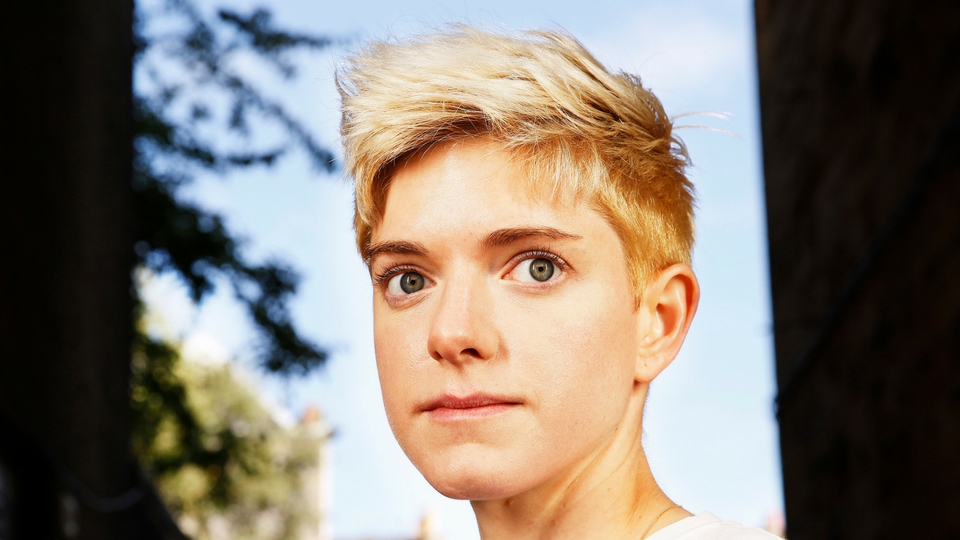 After an impressive end to 2017 with her Edinburgh Comedy Award nominated show Dope and as recent winner of Chortle’s ‘Breakthrough Act’ award this month, this trailblazing British-Canadian comedian is a rising comic star.

Known for her ability to connect with younger audiences, especially teens, through YouTube, I was keen to find out how she plans to maintain momentum and most importantly, keep making us laugh.

I caught up with Mae to discuss her work in light of not only her impending return to the Soho Theatre but its timely relevance in the context of uprisings led by young people around the globe.

For those late to the party and yet to see your Edinburgh comedy award nominated show – tell us what we can expect from Dope in its final incarnation at the Soho Theatre this April?

It’s a stand-up show about addiction, adolescence, love, Bette Midler and shrimps. There’s a joke about oboes that I like a lot. I’m excited to do these final three nights of it, it’ll be so fun and I hope people come please.

How’s your mum and how often does she come to see you perform?

Ha ha she’s very well thank you. She lives in Canada so she doesn’t see me perform, and she is also terrified of seeing me do comedy because she thinks if someone were to heckle me she would murder them and have to go to prison. So she mostly just watches stuff on YouTube.

You moved to the UK from Canada in 2011, how do audiences differ over here?

They’re more vocal, and more abundant. Loads of people go and see comedy as a hobby over here which is nice. It’s such a huge scene.

What are your plans for 2018 – are you doing Edinburgh again?

I’m skipping Edinburgh this year to work on an exciting project! It’ll be announced soon so stay tuned. Also, I’ll be doing some cool shows around town in the coming months where I improvise an hour of stand up so look out for that. It’s thrilling and scary.

The world is a global stage for millennials making their voices heard, with March For Our Lives movement etc – how much of a responsibility do you feel to give a platform to issues that affect younger people?

I’m thirty and I find that people in their teens today are endlessly inspiring me with their activism, their energy, and their fight for equality. They’re way ahead of where I was at that age. I feel a responsibility to be honest and open about who I am and to fight the good fight around issues like sexuality, and if that helps then that’s amazing, but beyond all that I mostly feel a responsibility to be funny because that’s my job.

You’ve tackled societal perceptions of sexuality and gender in your work, what other misconceptions do you hope to debunk through your upcoming projects?

This current show is about the way we view addiction and trying to humanise it more, and I still have a lot to say about that…. and I’ve got a book coming out soon about sexuality… I’m not sure what I’ll be talking about next. Maybe crumpets or penguins or something random.

Why do you think people from Canada (e.g. Ryan Gosling, Katherine Ryan, you, Antoni from Queer Eye, Justin Trudeau) appear to have more humanity and ability to connect with audiences than most other people in the public sphere?

Weirdly I have a WhatsApp group with all 5 of those people. I don’t know what makes up the Canadian identity really… love of donuts, trees, saying hello to your neighbour (America), apologising – all the clichés are true. We’re a nice earnest bunch with close cultural ties to England so we have a healthy dose of British self-loathing too.

What have been the best and worst things about moving to the UK?

Best = irony. Worst = too much irony.

Whose other shows will you be going to see this year and should we be looking out for?

Congratulations on the recent Chortle award for Breakthrough Act. How important is recognition by your peers?

I will spend my life striving fill the void in my soul with the approval and recognition of my fellow comics who I admire, and I’m ok with that.