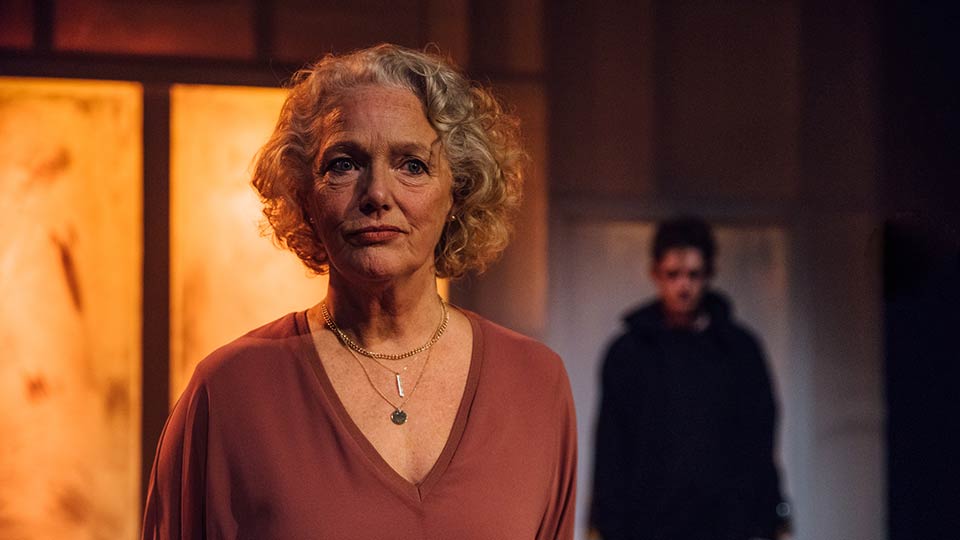 Most Ridley plays begin like a scream: worlds that are twisted versions of our own, already fierce, hurtling towards something terrible. They’re peopled with human monsters, ultra-violent tales and lyrical flights. Vincent River is a calmer affair, more of an inside-voice. Its darkness, however, is no less horrifying.

The set-up is simple. One room. One door. One single stretch of time in an East End flat. Anita’s a mother, just moving in, moving on from a life where her teenage son was murdered. Davey’s been following her for months, ever since the terrible event. Together, over the next 80 minutes, they unpack the secrets that surround the homophobic slaughter of Vincent River. They drink gin, take pills and surprise each other. They unravel in front of us and maybe let go of their guilt.

Louise Jameson is perfectly cast as tough but wounded mum Anita. She’s brittle, brimming and immediately convincing. Jameson is a seasoned TV pro and it shows. She has a face that tells it all, filling every second. In the confines of an intimate theatre, it means there’s never a moment of downtime. Watching her give in to some on-the-spot reflexology is a small wonder: a beautifully nuanced switch of gears that lets us in at last, so we’re hand-in-hand as we journey towards the night’s eventual horrors.

Thomas Mahy is an equal match as the tightly-wound Davey. He’s a constant source of fire even when most eyes are on Anita. He begins as a wounded animal, cornered and desperate. Slowly he uncurls and softens after spitting out the details of his ill-fitting life. When he finally released the facts that link him to the murdered boy, my tears were very real.

Director Robert Chevera does an elegant job, building the story without fuss. He lets the play live in the twists of its tale, focusing on the pulse of each character and the climb of Ridley’s tension. Together with his cast, they’ve created a beautifully calibrated cat-and mouse tease, which accumulates empathy until the final, almost unbearable account of Vincent’s death. It’s also a place where love and grief can make sudden appearances. One particular moment is shocking and strange but makes absolute sense: a startling shift of gear that wouldn’t work without the careful build of this knife-edge reality.

This might be a little more realistic by Ridley standards. A little more down-the-road. A little more like the fearful reality that’s on the rise again. But it’s because of this mirror that Vincent River remains one of the most horrific and meaningful of Ridley’s plays.

A surprising, darkly amusing tale of love and hate, of grief, and of extra-ordinary survival.