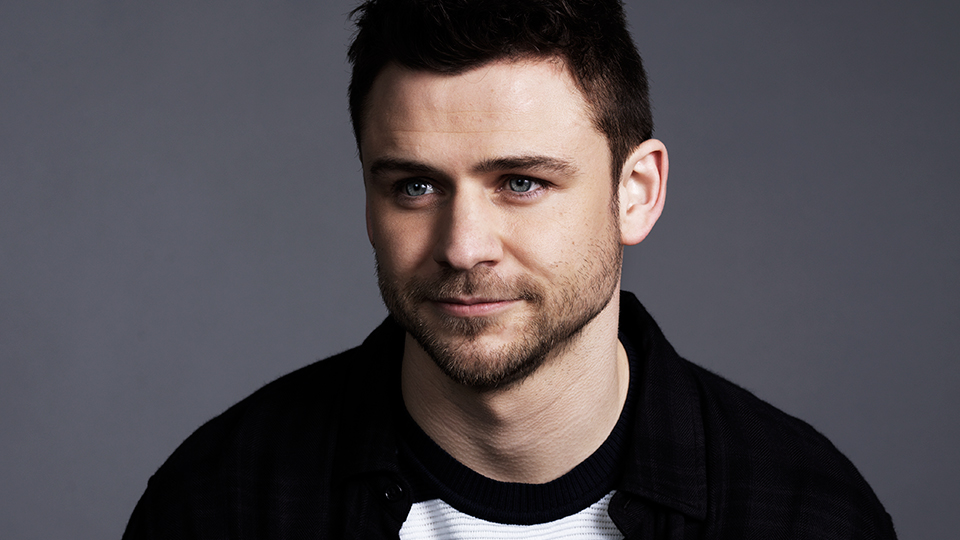 For his latest role, Bastow has hopped over the Atlantic for ABC’s high-concept sci-fi series The Crossing. The show boasts a stellar cast that includes Steve Zahn (Dallas Buyer’s Club), Natalie Martinez (Under the Dome), Sandrine Holt (House of Cards) and Rick Gomez (Band of Brothers).

As the show prepares to make its debut, I caught up with Tommy to talk about the series, find out what it was like to work with such an incredible cast, and to discuss the lessons he’s learned so far.

What can you tell us about your new show The Crossing?

I’m not sure how much I can say but the premise is that 150 years in the future there’s a big war and these refugees come back to the modern day to seek refuge. My character falls in love, maybe, with a girl from the future.

You play the character of Marshall. I’m presuming he’s one of the characters from the present day rather than the future?

Yeah he is. He lives on a trailer park and he’s had a tough upbringing… he’s a bit of a messed-up kid. When he meets Hannah, his life becomes meaningful.

The trailer for the show looks very high concept with lots of twists and turns on the horizon, a little similar to Lost. What can viewers expect when they tune in?

There’s definitely similarities between this and Lost , it’s the same network and I think they’re pitching for a similar kind of vibe. People can expect mystery, intrigue and also that no one’s characters are safe (laughs) so don’t get too attached. There’s a lot of twists and turns, as you said, throughout the whole series.

The cast for this show is amazing. What’s it like working with actors of this calibre?

This is my first big TV gig, especially over in the States, so it was a bit intimidating at first but they’re such nice people that I just felt at home as soon as I started speaking to them. Steve (Zahn) became like a producer. He was making sure everyone was okay and he’s very supportive. I learned so much as well. I come from stage training and there’s a lot of things that you need to shake and lose. They were really supportive of helping me transform into a TV actor.

What would you say is perhaps the biggest thing you’ve learned from them so far?

I was speaking to Rick Gomez, who plays Nestor, and he’s kind of like my father in it I guess. Marshall has had a turbulent past with his dad and he kind of takes on that role and that crossed over into real life as well. He would tell me how to behave on set, the things that are going on and how he likes to play a scene. I can’t really give away his secrets (laughs) but it was really nice to have all these actors be really open about their methods and impart knowledge. For a young actor trying to figure out what’s going on, it was extremely valuable.

The pilot episode is directed by Rob Bowman, who of course is a legend when it comes to TV. What was it like working with him?

That guy, I tell you man, he smokes 30-40 cigars a day. He’s always on it and he’s a ball of energy. He’s really precise. He gets to the point, there’s none of this fluff. You get some directors that really nurture the actors and he did this in his own way but he was very to the point and he knew what he wanted, which was really helpful especially for a new actor finding his feet.

You mentioned this is your first big role on a US show. What differences have you noticed moving from the UK to the other side of the Atlantic?

I just thank my lucky stars every day that I had the opportunity to go work in Vancouver on an American TV show. The differences I guess… the budgets seem to be a lot bigger so you’re a little bit more comfortable. The cast in this show particularly was huge so I made a lot of new friends. The nitty gritty of how it operates is actually very similar to British TV except they have maybe a little bit more money, time and freedom.

Just to pick up on a comment earlier where you said you had to lose some of your stage training for this role. What did you mean by that and what challenges did you have?

The stage actor voice is a curse that plagues all of the drama kids that come out drama school (laughs). I’d do a scene and I’d be speaking like I was in the Olivier (laughs) and directors would be like, ‘he’s right there in front of you’. I think at the end of the day good acting is good acting and hopefully it’s transferred across. I think it’s really important actually to have stage training and spend three years really honing a craft. I went to the Drama Centre, which is a fantastic drama school, and within those three years I really came up with a methodology of how to work and just an alignment of what I wanted to do in my life.

What was it particularly about this series that made you wanted to get involved in it?

Two words – Steve Zahn. The guy is a hero of mine and I grew up watching all this stuff. When I knew he was attached, I knew it would be a project I wanted to work on because I knew that he would bring class and quality to the show, shall we say. That was really exciting for me.

The pilot for The Crossing has been made available online in the US already. What feedback have you already had about the show via social media?

It’s been really positive, which is amazing! I try my best not to spend too much time looking at that kind of stuff. I like to have a distance from it as much as I can. It seems to be really amazing and the trailer they cut together is fantastic, as you’ve seen. The show just gets better and better so hopefully the fans will follow it through.

Why should people tune into the show when comes over to the UK?

I just think it’s a great story. It’s an ABC show so it’s something you can watch as a family and watch it with your kids. It’s a show that is really inclusive and I think it’s quite current as well for the whole climate of what’s going on in the States at the moment. More than anything it’s just good fun. You’ll watch it and you’ll be entertained. There’s suspense, there’s twists, there’s turns and there’s also a load of characters so there’s a lot of different stories that mix together. It’s very exciting!

The Crossing will premiere on 2nd April 2018 in the US and is one of ABC’s prime flagship dramas for this year. Each episode will be available in the UK the next day starting 3rd April 2018 on Amazon Prime Video.

Advertisement. Scroll to continue reading.
In this article:Steve Zahn, The Crossing, Tommy Bastow