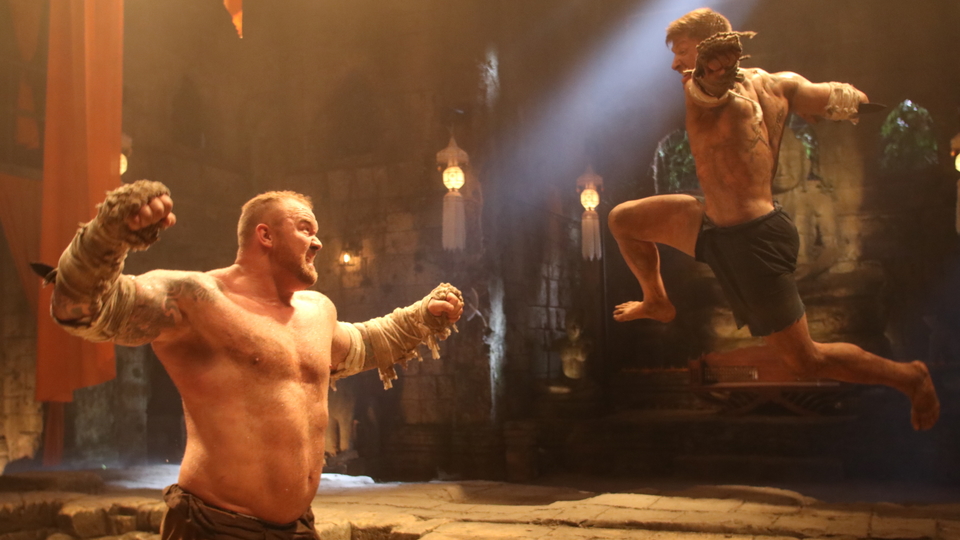 One year after the events of Kickboxer: Vengeance, Kurt Sloan has vowed never to return to Thailand. But while he is preparing for an MMA title shot, he is drugged and wakes up in a Thai prison. His captors want him to face a colossus named Mongkut – in return, Sloan will get $2million dollars and his freedom. If he doesn’t fight, his wife will die. So Sloan has no other choice but to undergo his most rigorous training yet, under some very unexpected mentors, in order to take on this dreaded opponent.

This follow up to last year’s sensational Kickboxer: Vengeance sees Alain Moussi and Jean-Claude Van Damme teamed up again as Kurt Sloan and mentor Durand – this time, with Sloan facing down one of the screen’s biggest and most brutal villains, in the shape of underground champion Mongkut, played by the incredible Hafþór Júlíus Björnsson, famous as unstoppable ‘The Mountain’ Gregor Clegane in Game of Thrones.

Hollywood stunt performer Alain Moussi, flexing his acting chops as well as his muscles, and original Kickboxer star Van Damme make a great pairing as the hotheaded novice and the wise veteran. The A-grade cast also includes Highlander’s Christopher Lambert, on brilliant form here as the villainous Thomas Moore, forcing Sloan to fight against his wishes; as well as boxing legend and The Hangover star Mike Tyson, who is drafted in to get Sloan ready for the mother of all bouts.

With exotic Thailand locations, fiery fight scenes and some stupendous stunt-work, Kickboxer: Retaliation is a no- holds barred-slice of slam bang cinema. With a finale that will make your eyes water, this is a blistering blast of mixed martial arts mayhem that hits the viewer right between the eyes.

The film is also available in a brilliantly bone-crunching box set paired up with Kickboxer: Vengeance, which sees Jean-Claude Van Damme training up Alain Moussi for a killer bout against Guardians of the Galaxy and Spectre star Dave Bautista.

Kickboxer: Retaliation is released on Digital Download on 26th January.

Kickboxer: Retaliation and the Kickboxer box-set will also be released on DVD & Blu-ray on 5th March, courtesy of Kaleidoscope Home Entertainment.