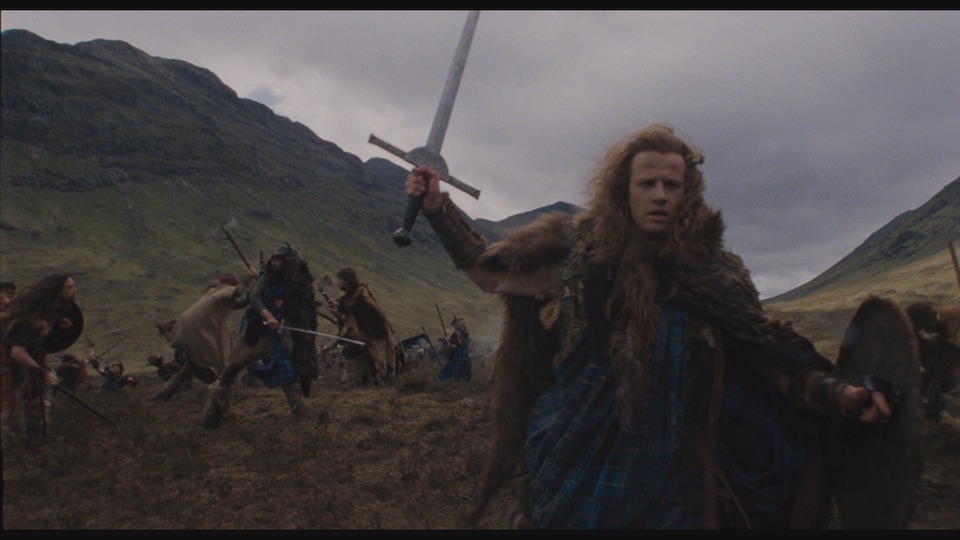 Ahead of its blu-ray release next month, the sparkly new digital 4K restoration of Highlander, the 1986 cult classic, had a red carpet premiere at the Edinburgh International Film Festival this week. Entertainment Focus was there to see the film and the onstage Q&A with actor Clancy Brown. The best bits are below.

The film, as I’m sure you all know, is about Connor Macleod, an immortal man living through the ages. The action moves from the clans of 16th century Scotland to New York in the 1980s. Played by French actor Christopher Lambert, Macleod is part of an ancient war between the race of immortals, that is finally nearing its end. Because after all, there can be only one.

This is pure cult cinema. There’s a Frenchman playing a Scotsman. A Scotsman playing an Egyptian. And a giant American stealing the show as a terrifying barbarian called the Kurgan. Add to that a soundtrack by Queen, and the rock video style direction of Russell Mulcahy and you have a film that despite all its bizarre ingredients is still going strong 30 years later.

Apart from a few frames that were beyond repair, this new print of Highlander looks absolutely terrific. We can’t wait for the blu-ray and all the amazing special features that will accompany the film. In the meantime here is a selection of the Q&A with the amazing Clancy Brown aka The Kurgan.

Memories from the shoot

I don’t remember anything! Maybe that wasn’t a great idea to have my children watch that! We were all so young and svelte and good-looking back then! I remember killing Sean! That was quite an honour. I think at that point only one other person had killed Sean!

We had some trouble with the extras, well not really trouble they were just so good. On the first day they had brought some courage with them, and got a little too realistic in the battles! The next day we had to have a crew of ambulances on hand. I mean I could care less, but there were a lot real injuries.

On the rumour of nearly decapitating Sean Connery

That’s not true. I didn’t almost decapitate Sean. That’s a good rumour though, so let’s keep it up!

On playing a good guy for a change in Earth 2

I was just getting married at that point in my life, so I was exploring the softer side of myself! And it was my first TV show. They were great fun people, and I was very fortunate to be able to do that. Even though that show was very brief and only went on for one season, it brought us my daughter. So it was 20 years ago when we made that show…and my daughter! That was the good thing that came out of it. I did enjoy it. That’s way more information than you wanted!

Who was the best swordsman on the film?

Me. Sean was quite good. Bob Anderson who is THE sword master of all time, he choreographed the fights, and Bob doubled on a lot of the fights. But according to Bob, the best swordsman in the whole Highlander universe was Adrian Paul from the TV show.

On getting the part of The Kurgan

The script was sent out to actors, and the first person they approached was Sean Connery (to play Connor) but he didn’t want to do it. So they asked if he wanted to play the Kurgan. He said no. They said who do you want to play, and he goes I’ll play the Ramirez guy. Okay fine. So who are we going to get for Connor. The director asked Kurt Russell to begin with, but he was busy. And then they asked Christopher, who had just won the César Award for Subway. He said yes. And then they went to Arnold Schwarzenegger for the Kurgan and he said no, he wanted to play a good guy after playing the Terminator. So Russell (Mulcahy the director) was at a party with Sting – he was a music video director and friends with all the rock stars of the 80s. Sting and I had just made a film together, and he said to Russell you should cast Clancy Brown, he’s a nice fella and he’s friggin’ huge! So I have Sting to thank and Arnold to thank for turning it down!

On the subject of a remake

Wouldn’t be great if they made it now? I want to play the James Cosmo part in the remake. I want to be Angus! To do the Kurgan, there was some talk of it being Dave Bautista, he would be a good idea. It’s got to be different, it can’t be so 80s. I’d forgotten how 80s it was! What a great soundtrack though! Maybe we can get Jason (Connery) to play Ramirez? I’m gonna pitch that. Who can we get to play the Highlander. Not a Scot, he can’t really be a Highlander. He needs to be some Eurotrash! That’s always fun too listening to Christopher’s accent. (in absolute perfect Christopher Lambert voice) There can be only one!

The Queen soundtrack was a part of Russell and his association with all the big acts of the 80s through his music videos. I’m not kidding I think it’s one of the best things about the movie. I think it’s the greatest soundtrack ever. It totally makes that moment when Heather dies. The makeup isn’t great, but that orchestral music and Freddie’s voice makes it.