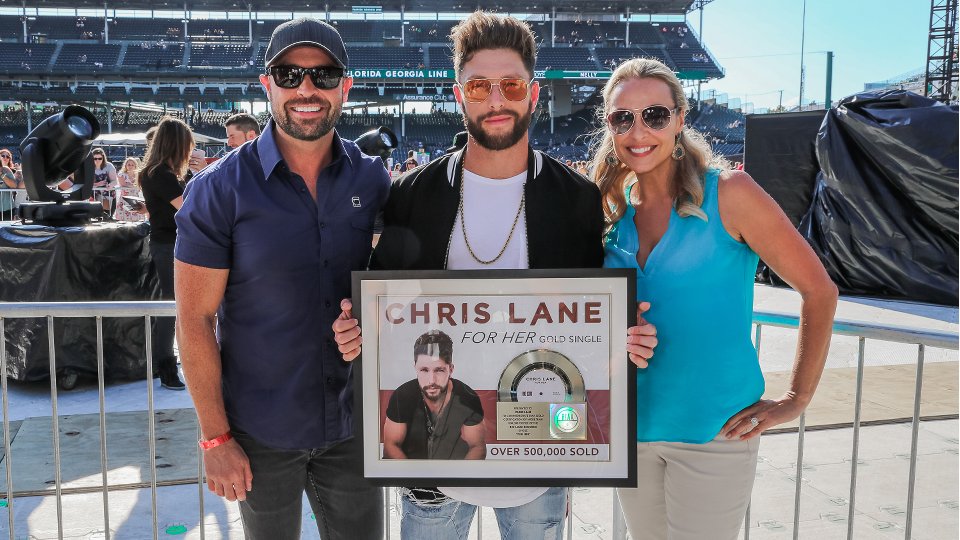 Chris Lane is celebrating as his current single For Her has been certified Gold by the RIAA.

Currently threatening to break into the Top 10 at Country radio, For Her is the follow-up to number one smash Fix which also hit Gold. Lane was surprised by CMT Hot 20 Countdown hosts Katie Cook and Cody Alan with a Gold plaque minutes before taking to the stage at the Wrigley Field stop on Florida Georgia Line’s The Smooth Stadium Tour on Saturday 12th August.

“It was a dream come true to play Wrigley Field, and for Cody and Katie to surprise me with the GOLD plaque honoring ‘For Her’ was more than I could have ever imagined,” said Lane. “I’m so thankful that this song impacted fans as much as it did me the first time I heard it.”

For Her is the second single to be lifted from Lane’s debut album Girl Problems. It was written by Kelly Archer, Sarah Buxton and Matt Dragstrem. The track has amassed more than 31 million streams on Spotify and over 7.7 million views on Vevo.

Over the past year Lane picked up nominations for New Male Vocalist of the Year at the 52nd annual ACM Awards and Best New Country Artist at the 2017 iHeartRadio Music Awards.

Watch the music video for For Her below: