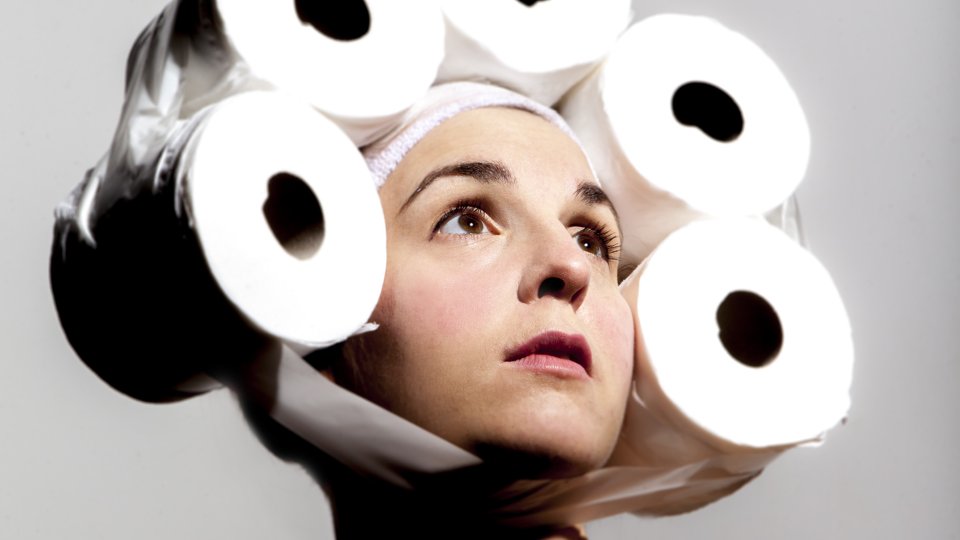 Kat Bond’s debut hour is everything a quirky show at Edinburgh Festival Fringe should be – a frivolous gig that’ll draw some joy from your inner child. Kat takes to the stage to unravel a yarn armed only with loo roll, a ludicrously over-sized telephone (decorated in loo roll), a headdress (made of loo roll) and a wheelie bin filled with props (mostly loo roll).

The venue – Pleasance That – is an ideal space for comedy. Located just beyond a back passage round the rear of The Pleasance Courtyard – the 55-strong audience are crammed into a setting that feels like you’ve entered a would-be Portaloo!

We meet the lonely, naive and refreshingly childlike character Pat. She doesn’t know her surname. Dressed in boyish shorts that show off her bruised knees, Pat reveals that she was abandoned as a baby. Dumped in a bin outside a Papa John’s in Luton. Now, she’s searching for her family and who she truly is. Otherwise, Pat’s backstory is unknown. Besides developing an obsession with Jenny Agutter’s character in The Railway Children, we can only guess at how Pat’s come to stand before us. It soon becomes clear that Pat has been living life through other people’s stories, all while seeking her own happy ending.

This playful one-woman show sees Kat Bond skilfully leap between characters, accents and impressions to paint larger than life pictures for the often bemused – but, crucially, amused – audience. It’s fun to watch Bond clown around, clearly enjoying sharing this offbeat journey of non-sensical self-discovery. A particular highlight was a delightfully daft poem about loo roll (what else?) where Kat requires an audience member to help bring toilet tissue to life on stage. However, the unsuspecting chap picked in our show couldn’t speak a word of English. Kat valiantly persevered but subsequently failed to draw any bigger laughs from the crowd that could beat his perplexed little face.

Kat’s an excellent mimic (or so she’s been told), switching boldly between an array of voices, improvising characters on the spot. I couldn’t help but sense inspiration from the legendary Victoria Wood’s classic skits such as the immortal “‘Ullo. I’m looking for my friend, Kimberley.” Although Kat’s material is far from grounded in a recognisable reality, she possesses a spark that invites the audience along for a ride knowing we’re in safe hands whenever a wry smile spreads across her lips when she momentarily breaks character. Kat’s imagination clearly knows no bounds and it is, at first, a struggle to make sense of the world she’s creating. My advice? Don’t try. Just absorb it (like a really good piece of loo roll) and go with the flow!

Throughout the show, Pat marks out her newfound ‘dad’, ‘mum’, ‘sister’ and ‘nan’ by draping different props around various members of the audience. Don’t be frightened of the audience participation, though. It’s all part of the gentle fun as the unusual journey Kat’s taken us on culminates in a frenetic family photo finish. As the crowd waved torn pieces of loo roll aloft, I was surprised to be overcome with an unexpected dose of pathos… silliness abounds in this far from bog standard show!

Advertisement. Scroll to continue reading.
In this article:Kat Bond