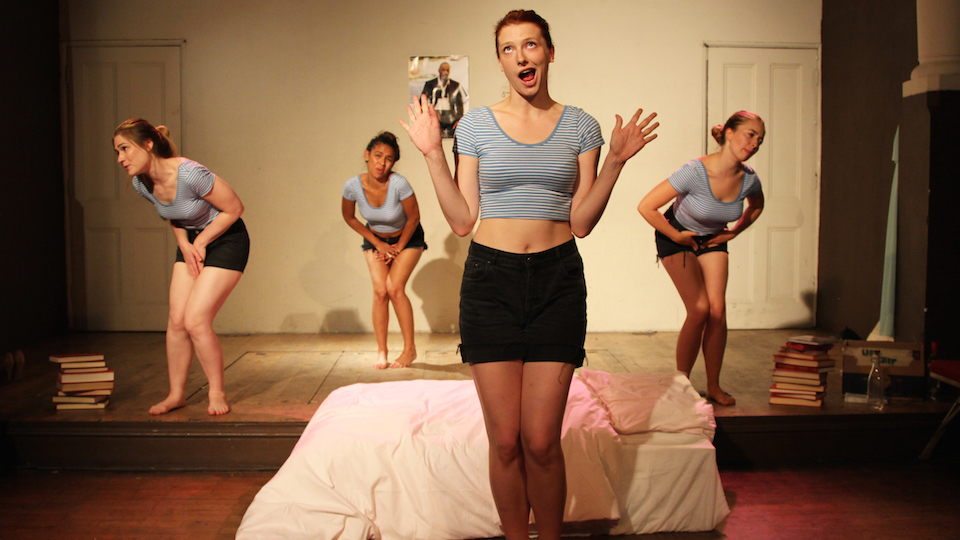 Credit: A Womb Of One's Own

New all-female theatre company, Wonderbox, bring their stimulating debut production – A Womb Of One’s Own – to The Space (Westferry Road, Isle of Dogs).

This vibrant coming-of-age story instantly piqued my interest, and a smirk, thanks to its pun. Tongue in cheek humour sets the tone and eases the hard-hitting life lessons our protagonist, Baby Girl, encounters as she finds herself needing an abortion in her first month at university. It may not sound like a piece to be played for laughs but you’ll be pleasantly surprised.

Skilfully woven dialogue helps drive along the unusual decision to have the four-strong cast share the star role. Claire Rammelkamp (Baby Girl 1), Carla Garratt (Baby Girl 2), Larissa Pinkham (Baby Girl 3) and Danica Corns (Baby Girl 4) simultaneously act out, narrate and perform scenes as Baby Girl and characters she encounters. All four talented players make a formidable ensemble, a clear chemistry has built between these actors since meeting at the National Youth Theatre, together with the director Holly Bond

The action opens in the Catholic home of 18-year-old Baby Girl, raised by two strict elderly relatives – stereotypical chain-smoking Irish ‘Grandmamie’ and fusty Great Aunt Mildred. Suffocating under their judgemental watch, Baby Girl furiously masturbates whenever she can, despite fearing that ‘God is watching’. Baby Girl’s parents’ whereabouts are as yet unknown to the audience but a palpable tragedy in Baby Girl’s backstory unfolds with the fast-paced plot to poignant effect.

Credit: A Womb Of One’s Own

The set, kept simple, is functional. A single white bed, centre stage, with a cardboard crucifix fixed to the back wall. This prop is swiftly and amusingly replaced the instant a sexually frustrated Baby Girl moves into student digs – with a poster of a hunky pin up.

Grasping her Fresher’s Week freedom, Baby Girl enters into the spirit with gusto. Losing her virginity is number one on her agenda. Out clubbing, awkward fumblings become her very first time, and she’s elated. However, a stark reveal of bloodstained bed sheets (she’s on her period) see the sins stacking up as Baby Girl starts exploring her sexuality with fellow student Miranda…Then, BANG. She discovers she’s pregnant from her very first time.

It’s hardly an original set up but it doesn’t need to be. Teen pregnancy’s a topic we’ve seen explored time and again and yet discussing abortion remains taboo. Playwright and actress Claire Rammelkamp shares that her personal experience of an abortion at university led her to pen this play. Rammelkamp had the support of her family. For dramatic purposes, Baby Girl has no-one to whom she feels she can turn. Comedy can be a powerful weapon and Rammelkamp cleverly uses it to help us digest this scenario. It’s refreshing to have the subject broached by a piece of theatre that’s genuinely filled with big laughs. Rest assured, there’s plenty of light amongst the darkness in this thought-provoking 55-minute show. Worth watching alone for several laugh out loud moments regarding BBC’s Call The Midwife and women’s magazine Take A Break.

Credit: A Womb Of One’s Own

While deeply honest, this show does not purposefully disrespect anyone’s religious beliefs. It merely shines a light on the questions a lost young girl is left to ask herself. Alone. Baby Girl wrangles with her feelings as she decides she wants an abortion. She’s a young girl without a job, a partner or supportive parents… Just 18, she’s still a child herself, literally on the cusp of growing up. Racked with guilt (Catholic and otherwise), she somewhat mistakenly turns to Google, obsessively researches each stage of development and considers the potential the foetus growing inside her has. ‘It’s got tiny hands,’ she repeats, her soul tortured as vile, emotive images used by Pro-life campaigners of foetuses fixed to crucifixes flash before her eyes.

The absence of the father figure in this play perhaps purposefully ignores the issue of a father’s rights as there’s so little time to explore it in an hour’s show. This is Baby Girl’s POV, but it is a missed opportunity to open the debate further – why does the male in this scenario get entirely let off the hook? The fellow fresher who impregnates Baby Girl doesn’t know he could have been a father, nor that his foolish actions have consequences. What lessons does he learn?

As the play draws to its conclusion, it’s an uncomfortable watch. The pain – physical and mental – is explored as the foursome depict the stark truth of experiencing an abortion, even when administered via tablets in the early stages of pregnancy. Baby Girl’s choice was not easy, and she will carry it with her for the rest of her life…

Given the heavy subject matter, I suspect Rammelkamp struggled to terminate this play with a satisfying finish. Without revealing any ‘spoilers’ by giving away the ending, I found the predictable upbeat conclusion quite unnecessary. Still, I took away with me the very clear need for men and women to have difficult discussions – statistics reveal that 1 in 3 women in the UK will have an abortion at some point in their lives. Don’t dismiss this as a play ‘for feminists’. What use is preaching to the converted? Wonderbox state that their maxim is ‘By Women, For Everyone’. Conversation is required with our daughters, sons and, most importantly, each other. I guarantee that if you see this show, you will be talking about it all the way home.