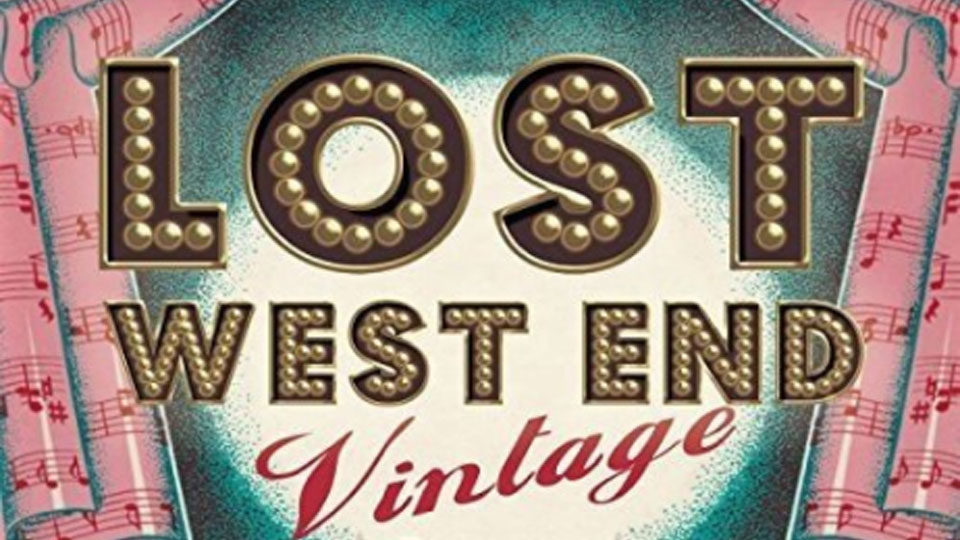 Regular fans of Stage Door’s amazing collections from obscure, forgotten or neglected West End hits may already have enjoyed Lost West End and Lost West End 2. The latest release in the catalogue, Lost West End Vintage, takes you further back in the archives, featuring a staggering fifty-two tracks taken from musicals dating between 1948 and 1962, some of which have never been released previously on CD.

The attraction of the collection, as well as shedding some welcome light into the darker corners of British theatre history, is the stunning weight of talent you’ll find. As well as those who were best-known for their musical theatre performances such as George Formby, Tommy Steele and Anna Neagle, you’ll find comedian Frankie Howerd, definitive Sherlock Holmes Jeremy Brett and pop star Cliff Richard to name but a few.

This release is so big it is spread across two discs. There’s something for everyone (assuming a taste for older British musicals) and the sheer volume of songs makes for a rich and fulfilling listening experience.

You may like the chirpy, flat-vowelled charms of George Formby, who would have been one of the biggest stars in the country when Zip Goes A Million hit the West End in the early 1950s. Similarly feel-good and sentimental is Anna Neagle’s turn in two songs from 1953’s The Glorious Days. Frankie Howerd, the legendary comic whose centenary is rightly being celebrated this year, sings Song and Dance Man from 1958’s Mister Venus with his customary comic lightness of touch.

Remember Peter Gilmore from The Onedin Line? Turns out he could hold a note, too. Before his TV fame, he starred in Follow That Girl and sings the title track here.

Of great excitement to this reviewer is hearing Jeremy Brett singing A Boy Called Johnny from the 1960 musical Johnny the Priest. Brett went on to star in the movie version of My Fair Lady, though (in an act of sacrilege) had his singing voice dubbed. He was a magnificent singer, as this song proves, and he never lost his taste for this era of popular songs – check out his duet with Twiggy on YouTube for proof of that. Brett finished his career as the definitive and never-equalled Sherlock Holmes in the 1980s/90s.

There’s plenty of Tommy Steele on the second disc (comprising covers and rarities), and an outing for Cliff Richard too, with the song The Shrine on the Second Floor from the musical Expresso Bongo. If there’s a criticism of this release, it’s perhaps that songs from the same musical aren’t grouped together, which certain mindsets would prefer, and the sleeve notes cover the facts but don’t have as much detail about the musicals compared to earlier releases. Still, that’s what Google’s for!

It’s not only some of these musicals that are forgotten, but the culture that created them. It’s perhaps fitting that the collection ends in 1962. If there was a birth of modern Britain, it was around about then, when the Beatles first arrived on the scene, along with cultural phenomena James Bond and Doctor Who. The austere post-war period of mourning, rationing and a desperate clinging on to the old ways finally caved in to rebirth and seismic shifts in the zeitgeist. You can hear it in this collection – the 1960s just around the corner. This is the last gasp and dying embers of a more structured and reverential musical theatre tradition. The sound of these songs belongs in a different epoch entirely. But for those who admire the cultural fruits of this era, Lost West End Vintage is a dream collection from bygone times, as well as a cracking selection of songs and performers.

Track Listing: Disc One 1. Cicely Courtneidge – It’s Bound To Be Right on the Night (from ‘Gay’s The Word’) 2. Pat Kirkwood, Sylvia Cecil, Graham Payne – Chase Me Charlie / Evening in Summer / I Like America (from ‘Ace of Clubs’) 3. George Formby, Warde Donovan – Zip Goes a Million / Running Away to Land (from ‘Zip Goes a Million’)
4. Anna Neagle – The Glorious Days – Part One (from ‘The Glorious Days’) 5. Anna Neagle – The Glorious Days – Part Two (from ‘The Glorious Days’) 6. Lester Ferguson – Carissima (from ‘Carissima’) 7. Bill O’Connor, Valeria Miller – I See Everything I Love in You (from ‘Wild Grows The Heather’) 8. Donald Scott, Joan Bailey – This Is Love (from ‘Twenty Minutes South’) 9. Sally Ann Howes, Jacques Pils – Live a Little Love a Little (from ‘Romance In Candlelight’) 10. Reg Dixon, Janet Brown – Sew a Silver Button on the Moon (from ‘Happy Holiday’) 11. Frankie Howerd – Song and Dance Man (from ‘Mister Venus’) 12. Peter Gilmore – Follow That Girl (from ‘Follow That Girl’) 13. John Baddeley, Anna Dawson – Girl on the Hill (from ‘Wildest Dreams’) 14. Richard Owens – Call it Love (from ‘Call it Love’) 15. June Laverick – Stop! (from ‘When in Rome’) 16. Lucille Mapp – The Early Birdie (from ‘Lady at the Wheel’) 17. Bertice Reading – My Big Best Shoes (from ‘Valmouth’) 18. Company – Grab Me a Gondola (from ‘Grab Me a Gondola’) 19. Company – Portobello Road (from ‘Make Me An Offer’) 20. Nicolette Roeg – Meet Me At The Strand (from ‘Belle or the Ballad of Dr. Crippen’) 21. Hy Hazell – When Does the Ravishing Begin (from ‘Lock Up Your Daughters’) 22. Millicent Martin – I Am (from ‘Expresso Bongo’) 23. Maggie Fitzgibbon – The Right Kind of Man (from ‘Kookaburra’) 24. Elisabeth Welch – If I Ever Fall in Love Again (from ‘The Crooked Mile’) 25. Jeremy Brett – A Boy Called Johnny (from ‘Johnny The Priest’) 26. Pat Kirkwood – No More Love Songs (from ‘Chrysanthemum’) 27. Gordon Boyd – Someone to Believe in (from ‘Vanity Fair’) Disc Two: 1. Theatre Orchestra Conducted by Hans May – Selections from ‘Carissima’ 2. The Melody Maids – Time Alone Will Tell (from ‘Cage Me a Peacock’) 3. Pear Carr, Dick James – Blue for a Boy (from ‘Blue for a Boy’) 4. Reg Dixon – Ordinary People (from ‘Zip Goes a Million’) 5. Edmund Hockridge – I Leave My Heart in an English Garden (from ‘Dear Miss Phoebe’) 6. Bill O’Connor – I See Everything I Love in You – Single Version (from ‘Wild Grows The Heather’) 7. Andy Cole – When in Rome (from ‘When in Rome’) 8. Toni Dalli – Be Not Afraid (from ‘Johnny The Priest’) 9. Johnny Wade – Funny Thing (from ‘The Golden Touch’) 10. Joan Regan – A Love Like Ours (from ‘Mister Venus’) 11. Diana Coupland – Love Him – Single Version (from ‘Make Me An Offer’) 12. The Beverley Sisters – Siesta (from ‘Lady at the Wheel’) 13. Mike Shaun – Getting Nowhere Fast (from ‘Harmony Close’) 14. Cliff Richard – The Shrine on the Second Floor (from ‘Expresso Bongo’) 15. Tommy Steele – Kookaburra (from ‘Kookaburra’) 16. Tommy Steele – The Dit-Dit Song (from ‘Belle or the Ballad of Dr. Crippen’) 17. Tommy Steele – My Big Best Shoes (from ‘Valmouth’) 18. Beatrice Lillie – Typically English (from ‘Stop the World – I Want to Get Off’) 19. Lionel Bart – Lock Up Your Daughters (from ‘Lock Up Your Daughters’) 20. Robb Stewart – Saturday Night (from ‘Chrysanthemum’) 21. Harry Dawson, Eleanor Drew – One Two Three (from ‘Follow That Girl’) 22. Dick Bentley – Naughty Gale Bird (from ‘Listen to the Wind’) 23. Dickie Henderson, Norman Evans, Norma Evans, Jean Metcalfe, David Croft – Selections from ‘Aladdin – The Wonderful Lamp’ 24. David Hughes – Selections from ‘Scapa!’ (Live) – Bonus Track 25. George Formby, Petula Clark – Ordinary People (Live) – Bonus Track (from ‘Zip Goes a Million’) Record Label: Stage Door Release Date: 28th July 2017