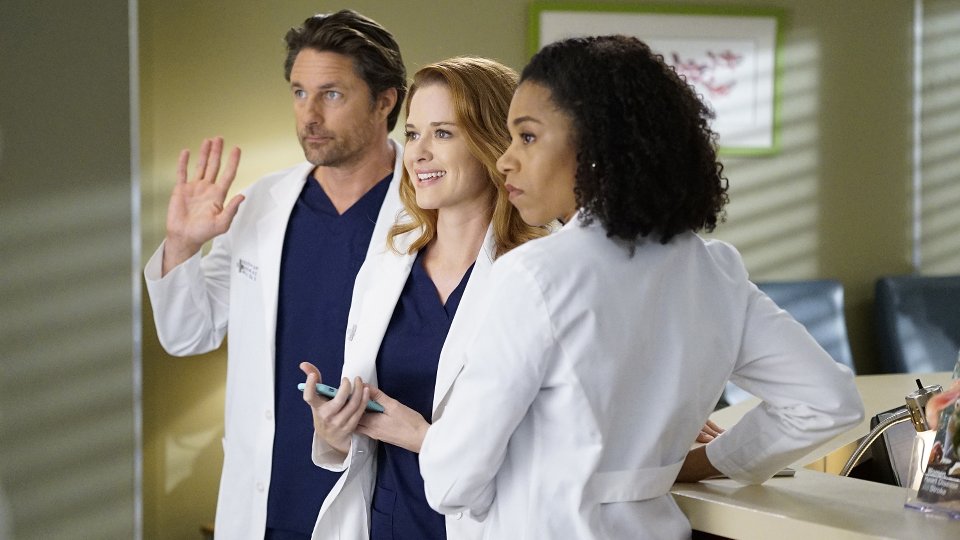 Grey’s Anatomy’s season 13 finale defied the expectations of fans that expected a major casualty following the explosion in the hospital.

If you haven’t seen the season 13 finale of Grey’s Anatomy and want to avoid spoilers, we suggest you stop reading now. If you have seen it and want to hear our thoughts on the upcoming 14th season, keep reading.

It looked pretty certain that Steph’s (Jerrika Hinton) exit was going to be in a body bag but in a surprising twist, she fought her way through the fires in the hospital, stopped a rapist in his tracks and saved the life of a little girl that got separated from her parents. Following her ordeal, Steph decided to quit her job and see what else life had to offer her once she recovered from her severe burns.

After waiting for nearly two seasons we got so close to seeing Owen (Kevin McKidd) reunite with his presumed dead sister Megan (Bridget Regan). He and Amelia (Caterina Scorsone) went to the Madigan Army Medical Center to see her but all we saw was a woman who may or may not be her on a gurney. Meredith (Ellen Pompeo) had the unenviable job of telling Nathan (Martin Henderson) that Megan was alive, putting a question mark over their fledgling relationship.

Elsewhere April (Sarah Drew) realised that Jackson (Jesse Williams) and Maggie (Kelly McCreary) had feelings for one another and told Maggie to go for it (I’m not sure I believed April when she gave her ‘blessing’) and Minnick (Marika Dominczyk) was fired by Bailey (Chandra Wilson) over her attitude and for failing to inform the police about Steph.

With Grey’s Anatomy already confirmed to be returning for an incredible 14th season, I’ve already started thinking about what I want to see when the show returns later this year.

Keep reading to find out my thoughts…

1. Meredith and Nathan to continue their relationship. It’s been two seasons in the making but Meredith and Nathan finally got it together, only to have the curveball of Megan crop up in the final two episodes of the season. It’s the first proper relationship she’s had post-Derek (Patrick Dempsey) and I wouldn’t like to think she went through all the heartache with Maggie to end up alone again.

2. Owen and Amelia to sort themselves out. I actually feel sorry for Owen with Amelia walking out on him then behaving like a child that didn’t get her own way all season. The two were pulled closer by the season’s end but I’d like to see them actually work through their issues. Owen clearly wants to so Amelia needs to grow up and take some responsibility.

3. Maggie and Jackson to try romance. I know this isn’t a popular opinion and the Japril shippers will likely flood the comments with complaints but I’m kinda over Japril. Jackson and April will always love each other but their relationship has moved past a full-on romantic reunion. I thought earlier on the in season that Maggie was capturing all the feels for Jackson and now it seems he feels the same way, I’d like to see the characters explore a relationship.

4. Minnick to stay gone. I wasn’t a big fan of Minnick this season and I felt the relationship with Arizona (Jessica Capshaw) was a little forced. Minnick was such a thoroughly unlikeable character that I couldn’t warm to her and loudly whooped and hollered every time someone completely ignored her. Now she’s out a job, let’s hope she’s also out of Arizona’s life.

5. Jo’s (Camilla Luddington) husband Paul (Matthew Morrison) to return. Did anyone else feel like it was a waste of Matthew Morrison to have him appear in one episode and barely do anything? At some point Jo and Paul will have to come face-to-face so she can deal with what she went through and find a way forward with Alex (Justin Chambers). Plus Matthew Morrison was fantastic!

6. Bailey and Richard (James Pickens Jr) working as a team. Now the two old friends have set aside their differences and Bailey has stood up to Catherine (Debbie Allen) by sacking Minnick, I’m hoping the two characters have a lighter season. They have superb chemistry and they are best when they’re working together rather than against each other.

7. DeLuca (Giacomo Gianniotti) to become more integrated. For a main cast member he spent a lot of time on the outskirts of everything once his court case with Alex reached a conclusion. He dropped the charges due to his feelings for Jo but she shot him down. DeLuca is a great character and he deserves to be involved in bigger storylines next season.

8. Leah (Tessa Ferrer) to get a storyline. Wasn’t it odd that Leah was brought back but then barely used? I don’t see why the show brought her back if they weren’t going to do anything with her.

9. April to move on and get what she’s owed. I felt bad for April this past season when she temporarily took Meredith’s job and got basically bullied by most of her colleagues. She needs to accept that she and Jackson are done, find a new love interest and grab that promotion she so desperately deserves at Grey Sloan.

10. The return of an old face. When Amelia spoke to Teddy (Kim Raver) on the phone, I was hoping that could signal a return for Owen’s BFF. If it’s not Teddy then I’d like to see Callie (Sara Ramirez) return after a season away. Basically I just want an old face to come back at some point because the show has had so many great characters that could be revisited.

Grey’s Anatomy returns to ABC in the US and Sky Living HD in the UK this autumn. What do you want to see from the new season? Leave your comments below and remember to keep it civil!