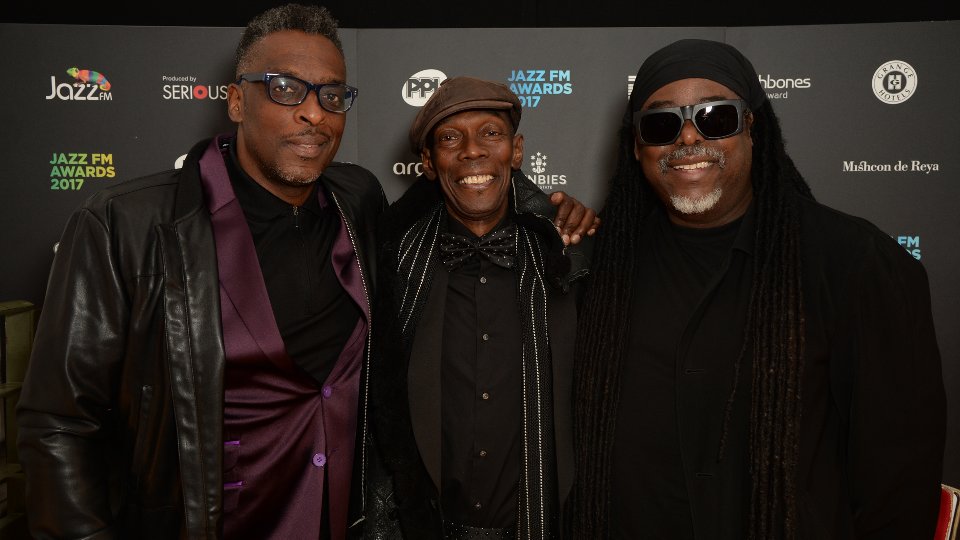 The Jazz FM awards 2017 was a night to celebrate some very exciting new music and also to celebrate legendary musical icons. It was a very poignant night, as it was also Ella Fitzgerald’s centenary. The Rolling Stones won three awards between them. Various musicians were invited to present individual awards – including the likes of Van Morrison and Maxi Jazz.

Maxi Jazz is of course best-known for his role as a member of Faithless. Their headlining gig at Belgium’s Rock Werchter festival in 2010 is a live standout musical moment for me and I adored watching them live. Hands up kids of the late 90’s who danced and danced and danced to the likes of God Is a DJ and Insomnia (and who still do!). However Maxi has no interest in talking about that period of his life now, as Faithless is now in his past and the band are no longer together. Maxi continues to DJ, play and create music and he will be appearing in various festivals and shows throughout the UK and beyond over the summer months.

I was extremely excited to get the chance to talk to the man himself at the Jazz FM Awards 2017.

Hi Maxi, are you a big jazz fan?

Hello. Yes I am. I’ve been a jazz fan ever since I can remember. There are so many jazz artists that I admire, far too many to name.

The Jazz FM Awards is a black-tie event and you look very dapper ..

I’ll be honest with you, Bonnie Raitt was one of the nominees and that’s the reason that I dressed up so well tonight. Bonnie Raitt is one of my favourite artists in the world, but then again, so are the Rolling Stones.

You presented the Rolling Stones with an award this evening ..

(Enthusiastically) I met Charlie Watts a few hours ago and I shook his hand, because I think he’s a don! I was really happy to meet him. When I went up to present the award, I pulled out the card and I read out their name and I was expecting Charlie to come up and accept the award on behalf of the band. But then I saw Mick Jagger and Ronnie Wood also coming up to collect the award, and I just thought: no way! (With a huge smile and a pause) And I shook Mick Jagger’s hand.

Yes, I am. To have met the Rolling Stones? It’s a very big deal in my life. I’ll have to tell you another time how I’m feeling, as I haven’t really come down from it quite yet and so I can’t tell you how I feel. I’ve been listening to their music since I was a little boy. I’ve always said that I was born twenty years too late. If I would have been 21 in 1968, I would have had the time of my life! I always say that I was born 10-15 years too late. But I’m not worried about it, it’s all cool.

Keith Richards couldn’t be at the ceremony, has he directly influenced your style of music?

I love Keith Richards and I love his style. My rhythm guitar style is based pretty much on Keith and his off-beat style when he plays rhythm guitar. That’s kinda what I do. I like off-beat notes, I think that’s really cool and funky. I’m a big, big Rolling Stones fan, I always have been. Their history is a bit chequered, but, the music has always been amazing.

Had you been born 15 years earlier, which artist would you have loved to see live the most?

Who are you listening to at the moment?

Laura Muvula. I think she’s amazing. I love her.

Would you like to work with her in the future?

(Smiles) I am not worthy!

Are you going to be playing any festivals this summer?

Yes I am. I’ll be playing at the Edinburgh Jazz Festival, and there are so, so many other shows that I’ll be playing this summer. The requests are coming in thick and fast, as they say. But I’d say to check the website, because I can’t really remember (laughs).