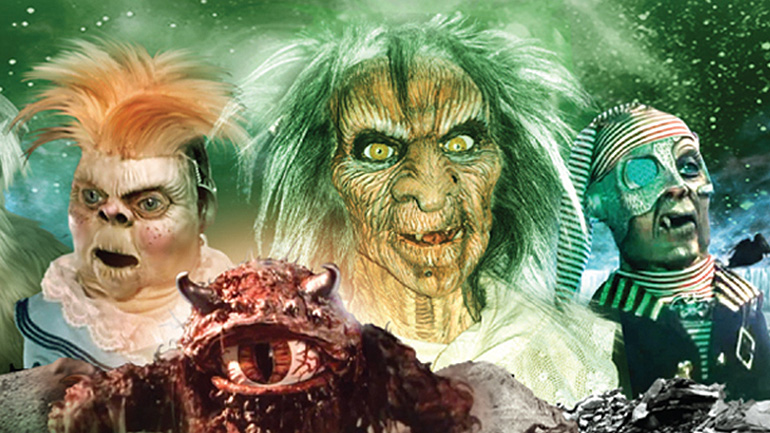 The third and final series of Gerry Anderson’s Terrahawks comes to Blu-ray in May, courtesy of Network Distributing. Restored from the best existing elements with new extra features, Terrahawks Volume 3 promises to deliver the definitive presentation of Anderson’s unique and final all-puppet production.

In 2020, an international security team, The Terrahawks, protect Earth from renegade androids Zelda, Cy-Star and Yung-Star on Mars. Their plot to rid the solar system of all human beings is regularly thwarted by the irascible Tiger Ninestein, directing a squad of Zeriod robots against Zelda’s deadly cubes. A mixture of explosive action, space adventure, slapstick comedy, musical interlude and occasional horror, Terrahawks remains one of the most divisive shows amongst Gerry Anderson fans.

Volume 3 is comprised of the final 13 episodes produced, originally broadcast as Series 3 in the United Kingdom throughout summer 1986. Unlike many of Anderson’s earlier Supermarionation shows, Terrahawks hasn’t benefited from regular revivals like Thunderbirds. The series stands alone as an Eighties curiosity, with little interest from following generations. This may, in part, be due to the shift in style from Anderson’s previous productions, which had become increasingly straighter in tone as the producer strived to make moves into live action series such as UFO and Space: 1999, all which expanded upon the hard science fiction elements directed at adult audiences.

In Anderson’s first puppet show for a decade, the producer took a leap in tone and made Terrahawks primarily for children, borrowing fantastical elements from previous hits such as Stingray and Fireball XL5. Every instalment brims with outrageous humour and offers an array of creative alien beings and playful, action-packed scenarios.

Episodes clock in at approximately 23 minutes and often take their inspiration from classic movies and literature. Standout adventures include Space Giant, a fine homage to King Kong and similarly Cry UFO, which offers an incredibly ambitious parody of Close Encounters of the Third Kind; demonstrating special effects which would not look out of place in the original. Two For the Price of One is a disturbingly comic outing where Cy-star, a withered female android, gives birth to a gender neutral, schizophrenic cyberbaby. What follows is bewildering, abominable and hilarious in equal measure. Who came up with that one?

Terrahawks asks you to embark on its journey with a sense of humour. The tongue-in-cheek tone of the show is perhaps best reflected in its writer credits, with pseudonyms inspired by the Ninestein character. We’re treated to Albert Zweeistein, Cubby Dreistein, Frank Instein and my personal favourite; Sue Donymstein.

Innovatively directed with sophisticated photography and movie-style lighting, Terrahawks is as beautifully crafted as any other Anderson space saga, albeit on a slightly slimmer budget. What it lacks in scale it more than makes up for in ambition; visual effects are imaginatively achieved using traditional methods and real models, showcasing superbly detailed vehicles against the colourful palette of other-worldly landscapes.

A major innovation for the series was a new development in puppetry, with characters built to a larger scale and articulated from beneath the set by hand. Coined Supermacromation, a new muppet-like method used figures fashioned in rubber, offering an improved range of expression and movement. The characters were also articulated with control cables, demonstrating more dexterity and control than their marionette precursors.

Not all the characters offer depth or sympathy, however. Leading character Tiger Ninestein is decidedly grumpy – perhaps because he’s one of nine clones – and sports a terrible pudding bowl haircut with a putty face only a mother could love. Other characters fare better; Lt. Hawkeye, Capt. Mary Falconer and Lt. Hiro are more aesthetically appealing, whilst Zelda and her cohort of cackling androids are genuinely nightmarish in their design. Vibrantly voiced by Denise Bryer, Windsor Davies, Jeremy Hitchen and others, it’s clear the cast are enjoying themselves in performances which never fail to bubble with charisma and energy, successfully bringing the puppet figures to life.

Spread over two Blu-ray discs, the episodes appear to be transferred from 16mm positives and are a significant improvement over the standard definition video transfers used on original transmission and DVD. 16mm cannot match the quality seen in 35mm negative transfers to Blu-ray, however all of these episodes are digitally restored and presented in their original 4:3 aspect ratio, providing maximum frame information with a depth of colour and detail never before seen.

Extras on the disc are plentiful and in the most part, presented in full 1080p. The Terrahawks Story, produced by Jamie Anderson, provides insightful and frank interviews with actors and key production staff. SuperMacroMachinations gives an insight into puppetry by Judy OPreece, whilst Why We Love Terrahawks is a warming featurette demonstrating affection for one of Anderson’s lesser-celebrated productions. An extended version of Making The Unexpected, a period behind the scenes documentary, has also been fully restored in HD and looks as if it were shot yesterday. Also included are FX trims, an audio-only episode, the catchy SOS music video and PDF scripts.

Something of a neglected property in the Anderson catalogue, Terrahawks has only really been experienced by one generation of viewers in the mid-Eighties, followed by a niche through VHS and DVD release. Lacking the sophistication of Captain Scarlet or the scale of Thunderbirds, Terrahawks is a very different beast and subverts expectations, yet offers the bold concepts and impressive visuals expected from a Gerry Anderson production. In many instances, the programme exceeds the limits of its budget with ambitious design and dynamic photography, coupled with satirical writing that dares to combine slapstick with bravura space adventure.

Bold, bonkers and often brilliant, Terrahawks Volume 3 provides the ultimate opportunity to explore a near-forgotten series from a creative team who weren’t afraid to experiment, creating a product quite unlike anything else on Eighties’ TV. Pick it up and expect the unexpected.

Samuel Paynehttp://samuelpayne.weebly.com
Reviewer of Theatre in the North, including releases of classic film and television.
Previous article
Madam Secretary 3×10 The Race preview
Next article
Grey’s Anatomy 13×20 In the Air Tonight preview