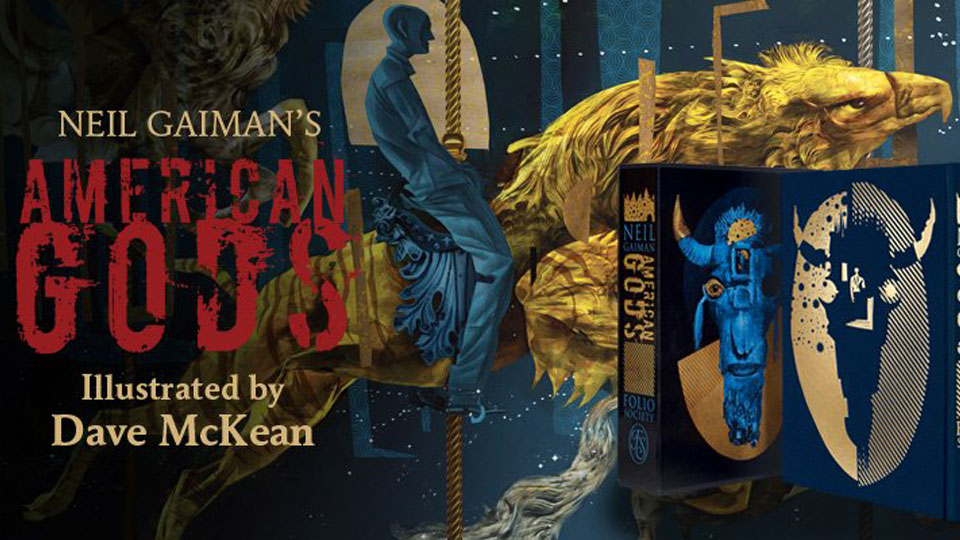 American Gods is a hugely ambitious book in its breadth of imagination and its unique take on a subject matter. Thankfully, author Neil Gaiman is up to the task, and it’s an incredible read.

This edition from the Folio Society coincides with the release of a new high-budget television adaptation, and it uses the slightly longer version of the text, preferred by the author, which first appeared in print in 2003. In common with its stablemates in the Folio Society range, American Gods is an attractively-presented hardback which is packaged in a card slipcase. Another visual impact is the illustrations – some of which cover two pages – by Dave McKean, who has brought added value to many literary titles, including Richard Dawkins’ book for children, The Magic of Reality. Given the subject matter of the book, McKean’s artistry is ideally chosen to visually enhance the world, and the paintings are stunning, even if at times macabre or sinister.

What genre is it, though? Science-fiction? Fantasy? There are certainly elements of both, but all the time that I was reading it, following the carefully interwoven story strands and the huge cast of characters, I was strongly reminded of the magic realism and epic narratives of Salman Rushdie. Having made that link in my mind, I couldn’t detach American Gods from the same literary part of the spectrum as works like Midnight’s Children and The Satanic Verses, which incorporate elements of the fantastical and the supernatural into the everyday.

That’s exactly the sort of world that Neil Gaiman creates with American Gods. It’s set in present day America (the book was first published in 2001) and follows the adventures of an ex-con called Shadow who, at the start of the story, has just been released from prison on account of the death of his wife, Laura. After a strange encounter, he starts working as an errand boy for a powerful and enigmatic crook called Mr Wednesday. His new life of crime is complicated by the return of his wife from the dead, and by the corporeal presence of a number of gods. Gaiman’s central idea is that gods don’t traverse cultures and lands unless taken to them by believers, so any place where somebody has believed in that god will retain their presence. As well as old gods, Gaiman throws in the new gods of American culture such as media. Were he writing now, surely social media would be the current strongest deity.

Into this mix of the worlds of the living and the dead, of the real and the magical, Gaiman throws a road trip and a host of colourful characters that are introduced along the way. If the book has a weakness it’s that a confrontation that is built up to doesn’t really happen, but a discursive resolution, where gods can be reasoned out of conflict, is in-keeping with the philosophical style of the piece. It’s also interesting that Gaiman shies away from involving gods still doing the rounds of human cultures to this day: perhaps erring on the side of caution after the fallout from The Satanic Verses?

Gaiman’s afterword concentrates on the concern that a non-native may not be best-placed to comment upon a particular nation and its culture. He comes to the correct conclusion that being an outsider can add insight. One of the great American novel of the 1950s that shone an extremely uncomfortable torch at the prevailing culture – Lolita – was written by a Russian. In some ways, American Gods is comparable to Nabokov’s masterpiece – both are verbose but brilliant, and not without controversy; especially in the case of American Gods with US sensitivities towards the depiction of religion and popular culture.

Whether or not Gaiman’s novel retains similar literary reverence as Midnight’s Children and Lolita, time will tell, but it has survived nearly two decades with a retention of readers’ interests, and this is sure to spike with the new TV series hitting the airwaves any time. It’s not too soon to hail American Gods a modern classic. For readers seeking out this review to consider reading the book alongside the show, why not go all out and bag yourself the definitive edition?

In this article:American Gods, Neil Gaiman, The Folio Society