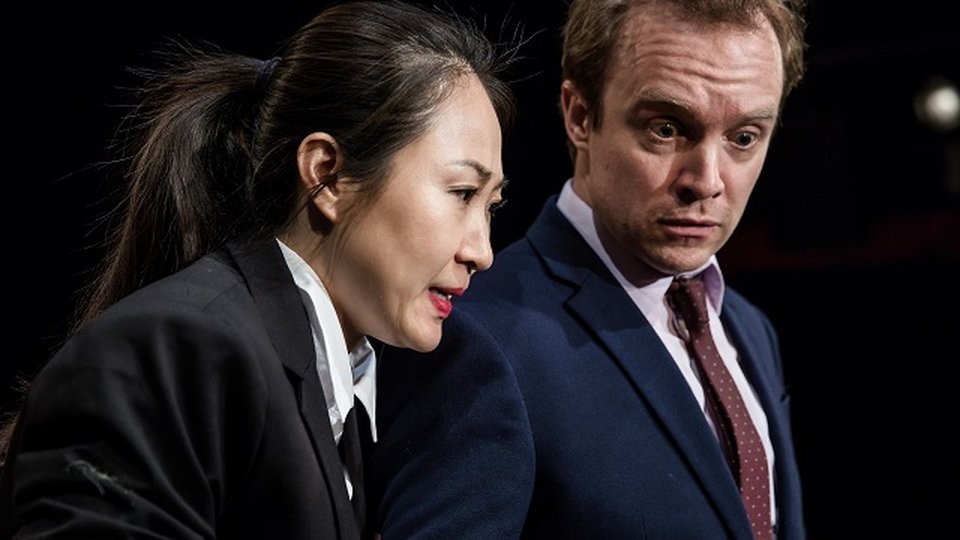 East met West in North London last night for a story that could have easily gone South with a different team behind it. Thankfully, the European Premiere of David Henry Hwang’s hit Broadway play, Chinglish, was every bit as funny, enchanting and engaging as anticipated.

A fictional retrospective of an American businessman’s attempt to break into the Chinese market without any knowledge of the local language, customs or politics, Hwang’s story is great fun – a chuckles and charm-filled tale of miscommunication. It’s clever and sharp, hooking you from the outset with humour, before expanding into a fabulous expose of two supposedly opposite, yet remarkably similar, cultures.

I had hoped for nothing less: Hwang is a Tony Award-winning playwright, a Pulitzer Prize finalist and the recipient of three OBIE Awards. That’s a lot to live up to but Chinglish, directed in the UK by Andrew Keates, reflects this pedigree.

Daniel Cavanaugh (Gyuri Sarossy), owns a signage company in Ohio, Cleveland, and is desperate to win a contract to provide bilingual signs for a new Cultural Centre in Guiyang. Enlisting the help of local ‘consultant’, Peter (Duncan Harte) – an over-confident, Mandarin-speaking Brit who explains that closing a deal in China requires good relationships rather than credentials – Daniel attempts to sway the Minister of Culture, Cai Guoliang (Lobo Chan) and his hostile Vice-Minister, Xi Yan (Candy Ma). He soon finds himself caught in the middle of old and new world politics and, to his bigger surprise, falling in love.

Poking fun at the corruption and hypocrisy in both Chinese and Western business practices, as well as love and marriage, Chinglish is a multi-layered comedy. The clash of cultures in the narrative eventually amplifies the similarities between both East and West, exposing how reputation, image and integrity are routinely constructed and exploited for personal gain.

Of course, miscommunication raises the biggest laughs, and I was delighted with the rapid-fire humour throughout Hwang’s bilingual script. He brilliantly emphasises how easy it is for information to get lost in translation, with personal favourites including Daniel’s announcement that he runs a “small, family firm” interpreted in Mandarin as: “His company is tiny and insignificant!”

Translations are offered through character dialogue (very witty exchanges) or via a screen within the set. Those of us watching from the Park Theatre’s vertigo-inducing Circle seating occasionally missed the expressions on actors’ faces while following the text on screen, but the cast was exceptional, particularly given the challenge to time their lines with the written translations.

Candy Ma stole the show – only just – with a powerful monologue, facing strong competition from Lobo Chan. He excelled in capturing the different nuances of the duplicitous Minister, creating more of a loveable rogue rather than an all-out villain. Duncan Harte portrayed a self-serving Brit with a sense of entitlement very well, switching from English to Mandarin with apparent ease, while Gyuri Sarossy pulled off the stereotype of an American abroad with just the right sprinkling of cluelessness. Minhee Yeo, Siu-See Hung and Windson Liong proved a delightful supporting cast, with Hung and Liong in dual roles, including a hilarious turn each as English translators.

Designer Tim McQuillen-Wright’s set was surprisingly versatile: a wall of 30 wooden cubes, it expanded into a hotel room, restaurant, courtroom and office with a few simple movements. A banging soundtrack of Chinese and English Pop tunes, from Sound Designer James Nicholson, punctuated key scenes, while Lighting Designer, Christopher Nairne, helped to swing the mood from corporate to romantic whenever necessary.

Highlighting cultural stereotypes and misconceptions with sensitivity, Chinglish is a marvellously captivating and funny tale. If you’re in the mood for Chinese tonight, I’d forget about food and head to the Park Theatre.