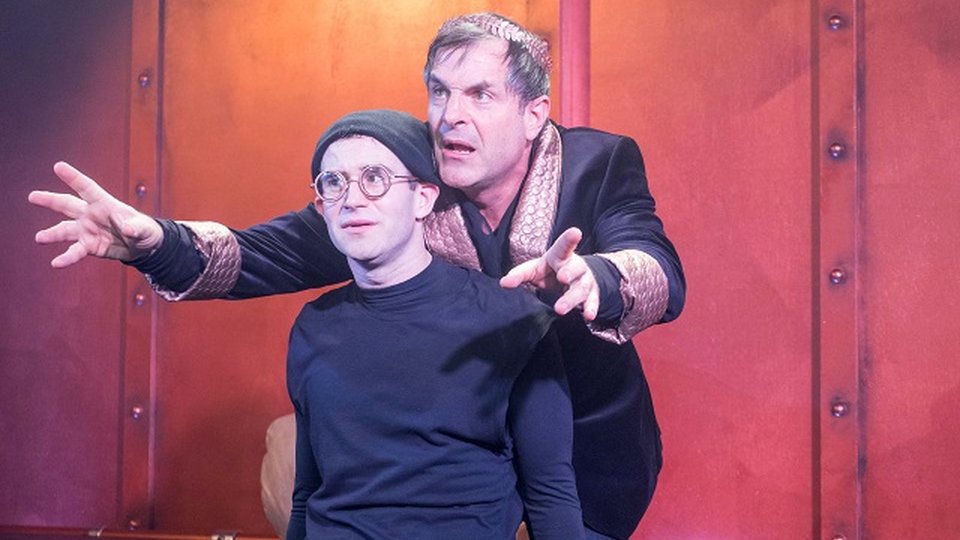 When Nathan Lane decided to tinker with the Burt Shevelove and Stephen Sondheim version of The Frogs – a rarely performed, 1974 musical loosely based on the ancient Greek play by Aristophanes – a Broadway run was inevitable. Debuting to mixed reviews in July 2004, the production closed within months (blasted critics, we ruin things for everybody!), leaving British audiences questioning if they would ever get a peek at Lane’s adaptation.

Fortunately, when it comes to bringing things back from the dead, The Frogs has no trouble with resurrection. The narrative demands it. Literally. I’d instruct you to witness the miracle for yourselves, now that the play has finally arrived on UK shores, but the run has already sold out. You can contact the Jermyn Street Theatre box office to enquire about ticket returns, or pray that further dates are added.

The plot follows Dionysos, the Greek God of wine and drama, who travels to the Underworld with his slave Xanthias in tow, to drag George Bernard Shaw back from the dead. Dionysos needs Shaw to enlighten the brainwashed masses and put the world to rights, sick of the discord created by the lies of leaders.

To reach Hades, the God and his slave must visit Herakles and seek out the ferryman, Charon, to cross the River Styx. Its banks are home to Dionysos’ worst fear: The Frogs. In Hades, William Shakespeare shows up and a battle of words ensues between the poet and Shaw, leaving a torn Dionysos to determine which of the two playwrights could better save mankind.

Is it worth seeing? The short answer: yes. This is Stephen Sondheim we’re talking about, after all. And the long answer? Lane took a leap bringing The Frogs to the UK and the splash will cause more than a few ripples from disgruntled critics. It’s a fun, light-hearted production with catchy numbers, timely messaging and a couple of standout turns from the cast but, like a typical Greek tragedy, it evokes sorrow. Regrettably, not always for the right reasons.

The buoyant humour of Act 1 was seemingly cast overboard (into the River Styx?) for Act 2, and the gentleman seated next to me yawned constantly, rudely and loudly, to the point where I wondered if he was fighting narcolepsy and had forgotten his pills at home. The play wasn’t that boring, I assure you.

Michael Matus was a competent Dionysos, overshadowed by George Rae’s Xanthias, a character blessed with the lion’s share of script highlights. I thought their singing chops were ill-matched in the bigger numbers but their banter was a genuine hoot. The absence of Xanthias in the play’s latter half greatly impacts on the audience’s enjoyment. Dionysos needs his side-kick to keep the mood light.

Chris McGuigan’s Herakles was sufficiently entertaining and I was fascinated by Jonathan Wadey’s take on Charon. He appeared to be channelling Johnny Depp. His mannerisms and speech, along with his unkempt hair, PVC trousers and silver rings resulted in a cross between a rock star and several of Depp’s onscreen characters.

The passionate sparring between actors Martin Dickinson and Nigel Pilkington, as Shaw and Shakespeare, proved exhausting but the second act was significantly lifted by Emma Ralston and Li-Tong Hsu. Ralston injected the perfect amount of sass and swagger into Pluto, ruler of the Underworld, and Hsu was delightfully charming as Virilla the Amazon.

Staged by House on the Hill Productions, Music Director Tim Sutton and Director/Producer Grace Wessels have failed to overcome the challenges of the intimate Jermyn Street Theatre. An outstanding music quartet was a joy to hear but drowned out the cast. For example, a scene reuniting Dionysos with his late wife, Ariadne (Bernadette Bangura), was inaudible in parts, as was some of the singing from Rae and McGuigan. Hopefully, that should be easy to remedy for upcoming performances.

Imperfections aside, this is a rare opportunity to see a much-dissected musical, linked to one of the greatest composers of our time. It’s a must-see, if only to be able to say that you’ve seen it. That alone makes it one of the hottest tickets in town and this reviewer feels mighty glad she saw the show.